I've had my HTPC running since early August. Overall, it's exceeding my expectations. It does crash more often than I'd like but it does great at creating files that I can burn to CDs or DVDs.

Here's the scoop on what I built. I added a Lite-On DVD-/+R burner for about $50 and a Syntax USB 802.11b adapter that was free after rebate. I used RealVNC to remotely control it. I built it with a monitor and keyboard attached and got the wireless working. Then I unplugged the monitor and keyboard and haven't looked back. It sits next to the TV cabinet behind a flower arrangement. My first choice was to put it inside the cabinet but I couldn't move the DVD/VCR to where the ShowStopper used to be. Then I tried to put it behind the cabinet. It fit there but it crashed more than before so I think it got too hot.

It was a bear to get setup. There were 2 major problems. First, it didn't come with any kind of a manual. Second, it came with backlevel drivers for the Hauppauge PVR-350. With the original drivers, it locked up almost every time you recorded something. Updating the drivers broke most everything. It took some head scratching to get the PVR-350's TV-out working by just guessing. I also had to turn off the rendering of the TV picture to the PC video-out so it wouldn't overwhelm the RealVNC wireless connection.

The only good thing to say about the support is that the Sage forum is wonderful. e-mail to Sage's technical support got response in a day or two but they recommended me to install an unsupported skin!

Here's a shot of the LiveTV Guide. 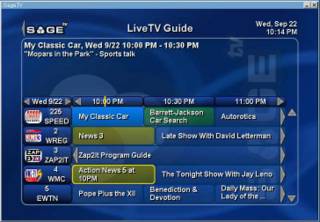 Notice the channel logos. They don't come with the bundle but there's a link to them on the forum. I had to create some of them but that wasn't difficult. The other thing to point out is the yellow border on the news at 10. That border indicates that it is a "favorite." You can specify "favorites" to be recorded on any channel or on a specific channel and how many shows to keep. 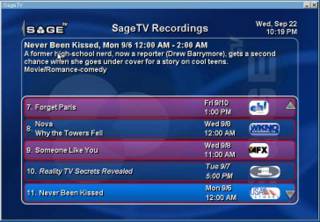 There're the logos again. When you select one of the shows, you get this very detailed screen: 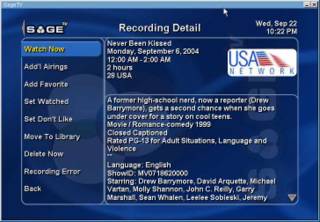 You can see that there's an arrow at the bottom indicating more data. That includes information like the recording resolution (more in a little bit) and file name and location.

Jumping back to "favorites," here's what the Favorites detail looks like: 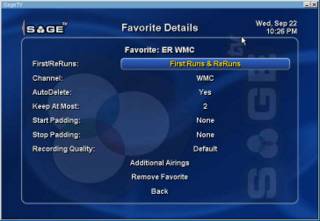 There're so many more screens that I haven't included. If you have any specific questions, drop me an e-mail, and I'll send you the screen shots.

Now to talk about resolutions. I fretted over my elusive Half-D1 resolution. I tried and tried to make my own encoding specification for Half-D1 to no avail. With no documentation, it was hard. Finally, I stumbled over the fact that CVD (Chinese Video Disk) resolution is Half-D1. That is buried way down on this page. That resolution is a standard in SageTV so I've made it my default. For an hour show, it creates a file that is 1.25 GB (1,3xx,xxx bytes). That will let you get 3+ hours on a DVD even without editing out the commercials. For half hour shows (like the news), I use SVCD Standard Play. That creates a file of about 5xx,xxx bytes for a half hour. This fits nicely on a CD and looks "good enough" on my 27" Sony Wega.

The Hauppauge card comes with uLead DVD MovieFactory 2 SE. This is good and bad. The good thing about it is that it is the only DVD authoring program that I've found that realizes that Half-D1 is a standard resolution for DVDs and won't reencode them. Reencoding will really cause degradation of the image. The bad is that if you even think about just trimming the front or back of the video, it will reencode the WHOLE thing. Damn. So close, yet so far. Hauppauge has a program you can download to edit the MPEG before you send it to an authoring program but I haven't tried it yet. You just open the videos in MovieFactory and it just works. No demultiplexing or worries about sound synchronization. Wonderful.

The remote doesn't seem to be able to operate anything but the SageTV so I'm back to multiple remotes. I'm not sure that this is all it can do since it doesn't come with a manual (have I mentioned this before?).

Overall the thing works great. I can record a ton of shows and burn to CDs or DVDs the ones I want to keep or share and they work fine. With CDs basically free and DVDs less that $.50, they're almost give-aways.

Oh, the crashing. Even with the new drivers, it still crashes about once a week. It almost always crashes at the end of playing back a program. I suspect that it is aggravated by recording while I'm playing back but that's not always the case. Putting it in "Sleep" mode reduces the frequency dramatically. It can still record programs while it is asleep. When it crashes, I just press and hold the power button and it comes right back up.
Posted by Ben Moore at 10:51:00 PM 0 comments

Craig Schmugar, virus research manager at McAfee, ... "Often, the release of the patch itself leads to exploits, as attackers reverse-engineer the patch code in order to learn what it's fixing. Hopefully, it won't come to that."

His lips are moving!

When I saw this article: IBM does Linux-only dance on Power, I just had to unload. The title of this post is the punch line to the old joke, "How can you tell when an IBM salesman is lying?"

I've been involved with IBM computers since the late '60s (don't do the math). I've spent lots of time in the Hudson Valley (beautiful place) talking with the mainframe folks and more recently the RS/6000 folks.

We had started with SAP on RS/6000 SP2s in the mid-'90s. What a fiasco. Our regional IBM sales manager was Gary L. from Charlotte. He had been in the Tennessee area and was very familiar with our shop. We quickly outgrew the capacity of the SP2s and had to move to free-standing boxes loosing the use of the SP2's high-speed switch (about its only advantage). In the late '90s we tried and tried to convince our management to let us quit throwing good money after bad with the RS/6000s and go to Sun or HP. Our CIO said that IBM was our "partner" and they would look out for us. We spent boatloads of money on RS/6000 equipment and suffered outage after outage on top of poor performance. All the while, IBM was pulling the resources out of our account one by one.

Finally, in '99, the RS/6000 S70A database server died and wouldn't reboot. They shipped us another one from the plant and it wouldn't power up. We built-up another one and got the system limping after 36 hours. We had to ship the boot drive to Austin for them to tell us what was wrong. It was an AIX bug.

This time when we went to management to replace the RS/6000 database server with anything else, they let us. We installed a Sun E10000 and you just wouldn't have believed the difference, both with the vendor and with the hardware.

But this was just the database server. The rest of the landscape remained on the old RS/6000 boat anchors. Then just over 2 years ago, we did an RFP to replace all the machines we were using to run SAP.

By now that IBM regional rep. was the Worldwide VP of RS/6000 sales! I told you we bought a lot of that stuff. IBM was in their transition from the S-series into the P-series (they were always transitioning from something to something else obsoleting all the equipment you'd just bought) and AIX 5l. The more we talked to them, the more I worried about their commitment to AIX. Our "partner" Gary came to Memphis and I asked him about that. Remember he was the Worldwide VP of RS/6000 sales. He stood in our office and told us that IBM would never abandon AIX. Now go read this article and visualize his lips moving.

PS. We awarded the deal to Sun and now have a homogeneous Sun environment. Thanks Gilly!
Posted by Ben Moore at 8:21:00 PM 0 comments

Here's a good article on Microsoft's Longhorn. You have to consider that the source could be slightly biased but it still has some interesting history of Microsoft's problems with delivering what they promise when they promise.
Posted by Ben Moore at 8:22:00 PM 0 comments