Almost a year ago, I wrote about Hello and how it could be used to upload pictures to Blogger. This technique let you host pictures at blogger.com. I've been using this very successfully ever since.

Today, while reading digg, I came across an article that pointed out that the Blogger post editor has a new feature. Up on the editor toolbar is a new icon that I had missed. It looks like a little picture.

When you click on it, you get a window that lets you upload pictures directly into your blog or point to an image somewhere else on the web (like above image).

Here's the screen shot of the upload window (uploaded from my desktop). 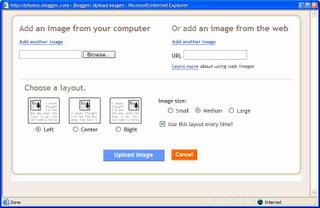 I've left the above images and the html pretty much vanilla as created by this Blogger process. It is a little pecuilar. Note that the first picture is actually scaled UP to the size I specified (seems that "Medium" is 320 pixels wide). If you click on the image, you get the true size which is smaller than 320 pixels. On the other hand, the second picture was bigger than 320 pixels. Blogger shrunk it to 320 but didn't store the large version.

Blogger's help says you're limited to 320 MB. Wonder how you manage that?

I think I'll stick to Hello for a while.

Just what you need, another e-mail address. Yeah, but the price is right, free. And like gmail, it's 2 gigabytes.

What I'm talking about is AIM Mail. Just go to http://mail.aol.com and sign in with your AIM screen name and password. Then they'll walk you through setting up an e-mail account at screenname@aim.com.

Unlike gmail, AIM Mail isn't pure POP but a combination of IMAP and POP. Here's what their help page says:

I haven't tried the IMAP/POP.

It's a client! It's a router! It's an access point!

One of the guys at work has noted that Wi-Fi manufacturers make different SKUs for 802.11 clients, routers, and access points although it would seem that the silicon is very similar if not identical. His speculation, and I wholeheartedly agree (cynic that I am), is that the manufacturers want to sell more units and multi-purpose devices would likely reduce their volume.

Well, now one of the manufacturers (D-Link) has a multi-purpose device, the AirPlus G DWL-G730AP Wireless Pocket Router/AP (DWL-G730AP). Here's what they say about it:

The DWL-G730AP supports multiple operation modes including: Access Point (AP) mode to create a wireless connection; Router mode to share an Internet connection; and Wireless Client mode to connect an existing wireless network. Easily switch between these modes by using the 3-way configuration switch located at the bottom.

A SWITCH to set the mode!

In AP mode, the DWL-G730AP adds support for 802.1x user authentication with an external RADIUS server.

This makes it "enterprise friendly."

Here's a picture of it. 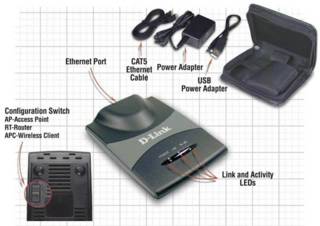 See the USB cable? It can be powered by the USB port.

I think I've mentioned before that I subscribe to Lockergnome's Windows Fanatics newsletter. I was catching up on it tonight and noticed an article on Hard Drive Harmony. Davis McCarn replied with a recommendation for HDTune. I downloaded it and played with it. I think it'll do what I was looking for in presenting S.M.A.R.T. data and much more. Here are the screen shots from their site: 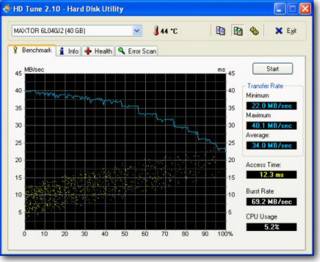 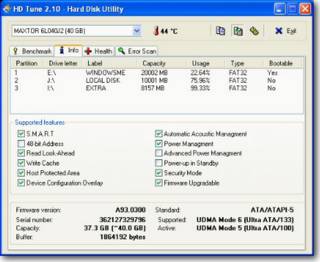 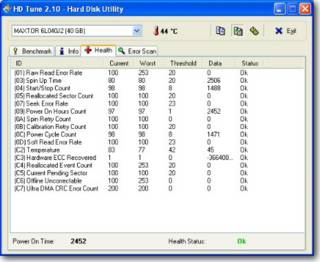 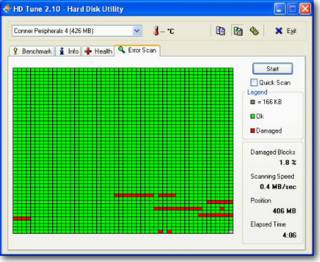 If you're expecting a success story here, move on. I'm a whipped puppy. A friend of my daughter brought her laptop over with "things popping up even when I'm not on the Internet." Sounded bad from the start. When I booted it up and found that it had NEVER had any Windows updates applied (since May 2003) and the McAfee anti-virus trial period had expired (2 years ago!). The next day was spent downloading and applying patches. I'm a regular reader of Fred Langa's newsletter. I went to his site and found this article.

I figured that Microsoft's AntiSpyware was a good place to start. You'd think since they created this situation, they'd know best how to fix it. Well, you can't be right all the time. It ran and looked very efficient giving a long list of what it "removed." It lied.

Next was LavaSoft's Ad-Aware. It too ran forever and gave a long list of what it "removed." Same result. Several pieces of software were still there. All the while, Microsoft's was complaining and claiming that it had removed some vermin and then it would just pop up again.

Googleing the web for these particular worms, IEPlugIn and ABetterInternet, turned up war story after war story of horror stories of people trying to remove these.

After 2 days of working on this system, I threw up my hands. I think the only sure fire way is to reimage it. Perhaps if you ran HijackThis and posted to one of these helpful forums you could eventually get rid of it. I can't imagine how long this would take.

When I buy a commercial PC, I put a Windows XP installation disk in the CD before I ever power it on. Then I delete the partitions, format the drive, and install a clean copy of Windows.
Posted by Ben Moore at 9:57:00 PM 1 comments