I've made good use of my Asus Eee PC 1000H. Recently upgraded to Windows 7, it has been my "in the car" laptop for months.

But it's still not a ThinkPad. Lenovo recently came out with several new models that piqued my interest, the Edge and the X100e. I started lurking around Lenovo's outlet site and finally found a deal on an X100e. 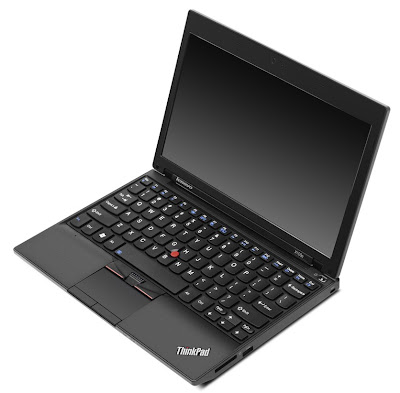 The specifications for the refurbished X100e that I got are:
The outlet price was 50% of list and since it was very slow to ship, Lenovo gave me an 10% "sales concession" (credit) so the price was very good.

Although Lenovo doesn't put a lot of crapware on their PCs, I wanted it running Windows 7 64-bit so I reformated and loaded Windows 7 Pro 64-bit. I had let Windows Update install all the drivers it had and then went to Lenovo to get all the rest of the drivers.

The only issue I had after the reload was that when running Google Documents using the new document format, highlighted text was barely discernible when on battery power. As you can imagine, that took a while to figure out what all the conditions were.

My Asus Eee PC came with Windows XP Home. I've used it as my travel laptop. I got a cigarette lighter adapter and keep the Eee PC in the car.

When I got the Eee PC in the fall of 2008 there was lots of chatter on the forums of installing Vista on it. There were some bootleg drivers out there but no formal support from Asus.

After I got the TechNet Standard subscription, the Eee PC was high on my list for Windows 7. As it turns out, Asus not only supports Windows 7 on the Eee PC with drivers but actually provides a self-upgrade guide to install Windows 7.

It all worked great. I had already installed 2GB of RAM so that wasn't a problem. There are a few subtleties of the Eee PC that don't work. For example, the XP load has the ability to configure the display to 1024x768 and either make it scroll or compress. The vanilla Windows 7 video drivers don't support that. I never used that capability but there are some hacks out there if you must.

Even the Eee PC "bells and whistles" work. For example, the multi-touch track pad (actually from ELAN) is fully functioning along with Asus' Eee Super Hybrid Engine.

Flashing the BIOS was the toughest part. I haven't figured out how to get rid of the grey POST screen but I haven't tried very hard.
Posted by Ben Moore at 11:53:00 AM 0 comments