You'll remember that I got a slightly used ThinkPad X40 and suggested that I might add a SSD drive to it? I did. WOW! 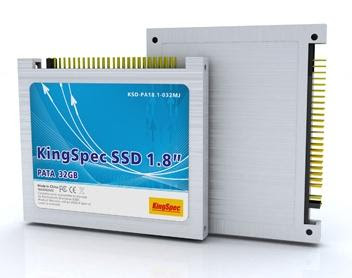 This picture is of 2 KingSpec SSDs showing the top and the bottom. Don't panic seeing that jumper. Just leave it alone and it'll be fine.

Before I ordered it, I had a technical inquiry of them and it was answered via e-mail within 12 hours. The time difference worked in their favor. With that resolved I ordered it on a Tuesday afternoon and it arrived the following Tuesday, 7 days.

The end-to-end installation took 40 minutes. I booted Bart-PE with Ghost v8, created an image of the old Hitachi 40 GB HD on an USB HD, swapped the drive, and restored the image. Swapping the drive was just about the easiest hardware modification I've made. One screw to remove the drive and carrier. Four screws to remove the HD from the carrier. Put it all back together with the KingSpec SSD and you're done. Really couldn't have been simpler. Ghost handled the smaller sized drive with no problem as the 40 GB was only about 8 GB used.

And the results? With the Hitachi HD the X40 took 2:14 to hibernate and 1:05 to resume. With the KingSpec SSD it takes :29 to hibernate and :20 to resume. These aren't terribly scientific nor comprehensive but they are what I care about.
Posted by fastoy at 11:10:00 AM 0 comments

I've loved my BlackBerry Curve. I hardly ever have to reboot it like I did the Motorola Q9h. Some people may complain about the 2G network but I never found that I wanted to browse long enough on that screen for the network to make a difference.

It's sad when you get so old that you look forward to the the hand-me-downs from your children. My son-in-law has been one step ahead of me in cell phone gadgets. He had a Treo 650 before me then when he went to a BlackBerry Bold I followed with a BlackBerry Curve.

Now he's gone to the iPhone 3GS. I'm holding out for a GSM Motorola Droid (Milestone?) but he passed on his Bold to me.

But that screen! It's the same size as the Curve's and clearly smaller than the iPhone 3GS' but the resolution is what makes a difference. Not only is it brighter with more contrast than the Curve but it is 320x480 compared to the Curve's 240x320.

It runs BlackBerry OS 4.6 like the Curve but has Visual Voicemail. I had to call AT&T to get this provisioned on my account. There's no charge for it.

My son-in-law had had this Bold connected to his work e-mail so I had to remove the IT policy. I used BlackBerry's JL_Cmder to do this. It took 10-12 attempts to get it to "connect" so keep trying.

One of my projects is to tether a laptop to the 3G network via Bluetooth. That'll be fun.
Posted by fastoy at 11:38:00 AM 0 comments

Google has always been about cheap (even free) storage. Initially Gmail had a gigabyte of storage. Unbelievable! Then Google raised the bar. Now the storage is over 7 gigabytes. This was used for Gmail and Picasa Web. If 7 gigabytes wasn't enough Google would sell you more. An extra 10 gigabytes was $20 per year.

Now Google has doubled the storage to 20 gigabytes and dropped the price to $5 per year. For the old price of $20 per year you get 80 gigabytes!

You can read about it here. The prices are here.

I really prefer to call them Short Screen Displays. I've had personal consternation at Office 2007's placement of the ribbon across the top of displays when displays are becoming shorter rather than taller. It always seemed to me that it'd make more sense from a real estate perspective to at least alternatively allow the placement of the ribbon on the side rather than at the top.

I was never brave enough to put this in writing but finally someone else did.

In Jerry Pournelle's Computing At Chaos Manor: The Mailbag a reader wrote:

Also, the ribbon occupies some of the most valuable real estate on the modern display: vertical space. On my laptop I have a modern wide aspect display. MS Word XP displays templates, formats and similar helpful stuff off to the right, leaving me with a relatively tall text space. A ribbon would be disastrous. It's merely annoying on my 4x3 display, but I keep it minimized. Needless to say, despite having access to cheap copies of Office 2007 (two more students in our household), I will be maintaining our Office XP versions.

It's very interesting to watch a huge company make such a bone-headed decision on its flagship product. At the very least, you'd think there would be a way to run the ribbon vertically, so that it could be a sidebar, like the bookmark and history sidebars we see in some browsers. Heck, even my ancient copy of Paint Shop Pro 7 allows for vertical toolbars. And MS's own Vista developers allow for a sidebar display, with pretty widgets. They get the wide aspect business. You would think that watching Firefox get ready to destroy its classic UI to reduce the browser's vertical acreage would be a clue to avoid filling up vertical space.