Several years ago I shared my short list of requirements of a browser. Subsequently I've switched to Chrome and been quite happy.

But recently as I setup a new PC one of my favorite extensions Google Toolbox (by Google) didn't meet the third item on my short list: Close tabs when I double click them.

I thought it was just something I'd failed to set in the options so I went through them again. it still didn't close tabs when I double clicked them.

So I went to the Google Toolbox page in the Chrome Store. There were a couple of reviews that suggested that something was askew. (The page now gives "An error occurred: Item not found. This item may have been removed by its author."

So I searched the Chrome Store looking for alternatives. Google Toolbox was really much heavier than I really needed anyway and had caused problems with YouTube recently.

I came across "Double Click Closes Tab." It uses a double click ON the web page to close the tab. Not a double click on the tab. That's not what my muscle memory is. But in reading the description I think I've figured out what's going on with Google Toolbox.


To those wanting "double click on tab to close" - Google now made its own extension to do that and more. It uses a plugin mechanism that uses compiled binary code and presents a security risk unless you're sure you can trust the author (of course coming from Google it's likely fine). Without using such mechanism, Chrome extensions cannot receive tab events. Google's extension is called Chrome Toolbox.

The emphasis is mine.

I'm not a developer (unless you consider S/360 assembler development!) but this suggests that Google Toolbox was using NPAPI rather than PPAPI. Put yourself to sleep here with the details. It is so Google to have a technology PPAPI (Pepper Plugin API) that uses Native Client (NaCL). Think about it.

I first ran into the NPAPI vs. PPAPI issue back here with Flash. Chrome's page says "NPAPI is being phased out. Consider using alternatives."

I believe that this is a deliberate effort on Google's part to remove all the NPAPI extensions from Chrome. This goes beyond security though. This is a platform issue. Remember back in 2011 when I tried a Chromebook? One of my observations (whines?) was that the Google Chrome Toolbox extension for the Chromebook didn't support "Double click on a tab to close it." I missed the significance of that.

There's a post in the Google Chrome Extension Development forum calling for a non-NPAPI version. In this era of Google's "Spring Cleaning" that's not likely to happen. And as to my short list item of wanting to close tabs when I double click them that's not going to happen either. Apparently handling a click on Chrome's "chrome" (i.e. the tab proper) isn't supported by PPAPI. And that's probably not a bad thing.

There are threads in the Google Chrome forums here and here that you can follow but don't expect any relief. I just wish that Google was more transparent about things like this. Simply updating the Google Chrome Toolbox page in the Chrome Store would have answered all these questions and put Chrome users into looking forward rather than looking backwards.
Posted by Ben Moore at 8:06:00 PM 3 comments

I continue to be amazed by the OBi100. In my transition to VoIP I lost some minor features of my POTS service. One of these was that I had AT&T's Ring Master Service.


RingMaster service enables two or three telephone numbers to share one line. A unique ringing pattern is provided for each of the additional numbers. This allows a customer to determine prior to answering a call, which number the calling party has dialed.

What I had done was to have my business Google Voice number forwarded to one of my Ring Master numbers. This way I could tell whether the incoming call was for my personal number or my business number.

Plan B was to just take all the calls to the business Google Voice number on my cell phone. That worked but cost me airtime and talking on the cell phone is not as comfortable as on a traditional handset.

A quick Google of "obi100 multiple google voice accounts" turned up this forum post. Better yet "bgt23" answered his own question.

The OBi devices support TWO VoIP services. So I just went back to OBiTALK.com and connected the second adapter to the business Google Voice account. 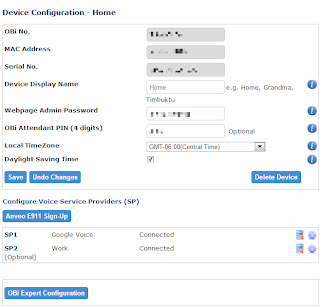 2 minutes later it was all working. And by default the ring tones are different.

PS. There's another twist coming in this saga.
Posted by Ben Moore at 8:47:00 PM 0 comments

Recently I was expecting a FedEx Ground delivery. It was an exceptionally large package so I wanted to give the FedEx delivery person some guidance on where to leave it.

To do this I had to register as a FedEx Delivery Manager. I gave it all the expected information of name, address, phone number, etc. I thought that was going to be all that was needed.

But then FedEx started asking me all these random multiple choice questions with random incorrect answers. They said it was to "validate your registration." That seemed odd as they could have done that by matching the airbill information with the information I had provided.

Here's a sample of the questions. 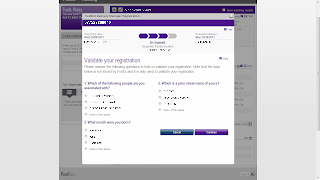 I didn't recognize any of the people listed. Nor had I lived on any of the streets. My birth month was in the list and I got that right but one out of three didn't "validate" me.

Fortunately it didn't kick me out before I got two questions on one page that I could answer. Other than my birth month it asked me what town my daughter (identified by her first name that nobody uses) lived in. That's really a pretty disconnected piece of information.

In a related vein, NPR had an article recently that described a web site that Acxiom has established that is supposed to give you "a glimpse of the online profile your shopping habits have created for you."

I'd say that glimpse was the operative word. I didn't find that they really showed me much information. Perhaps they didn't have much (unlikely) or they didn't want to show their hand (likely).

Now with this FedEx experience I wonder if Acxiom's data is accurate.
Posted by Ben Moore at 8:29:00 PM 0 comments

I'd had an 802.11n-capable router for a long time but as I discovered it wasn't connecting in n-mode. Installing the Asus router and having the ThinkPad T420s connect in n-mode made a believer out of me.

I never got my Actiontec PWR500 Powerline Ethernet adapters on the same phase so the TiVo in the bedroom continued to complain about network speed/connectivity.

I had an electrician in on another project and I asked him to give me a bid to drop Cat 6 Ethernet at each of the TiVos. His estimate sent me looking for alternatives.

I bought a pair (one for each TiVo) of Asus EA-N66R adapters. The installation was incredibly easy. The default configuration is an Ethernet bridge. All I had to do was choose the SSID and enter the pass phrase. While I was at it I reflashed the firmware.

I think that this is actually limited by the Comcast Internet connection and that the 802.11n WLAN connection is faster than 30Mbps.

Break Me Off A Piece of That KitKat Bar

Everybody expected Android v4.4 to be Key Lime Pie. Google surprised everyone and called it KitKat.

I haven't mentioned my Nexus 7 previously. One of the nicest things about a Nexus device is that they (almost) always get the newest versions of Android early.

KitKat first shipped on the Nexus 5 followed by a promise from Google that both versions of the Nexus 7s would be next.

Finally it arrived. The installation was as easy as a CyanogenMod update. 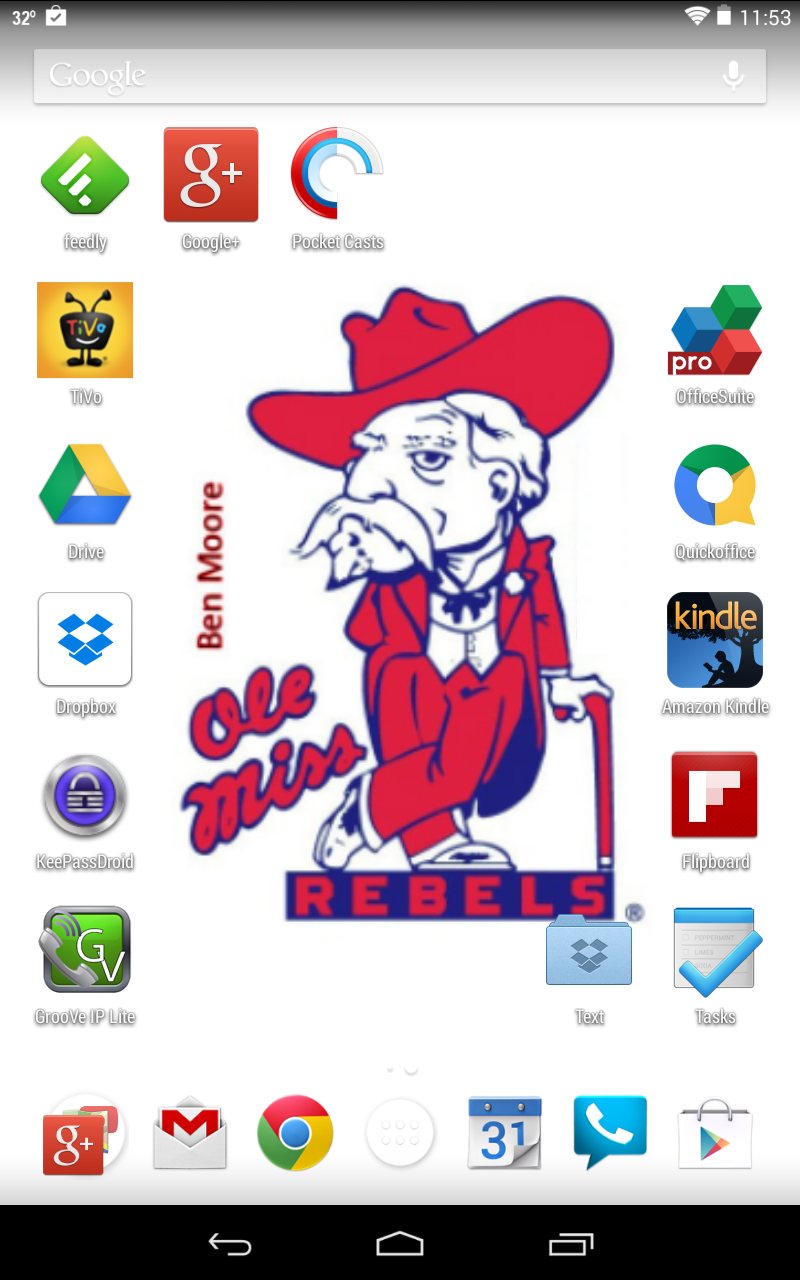 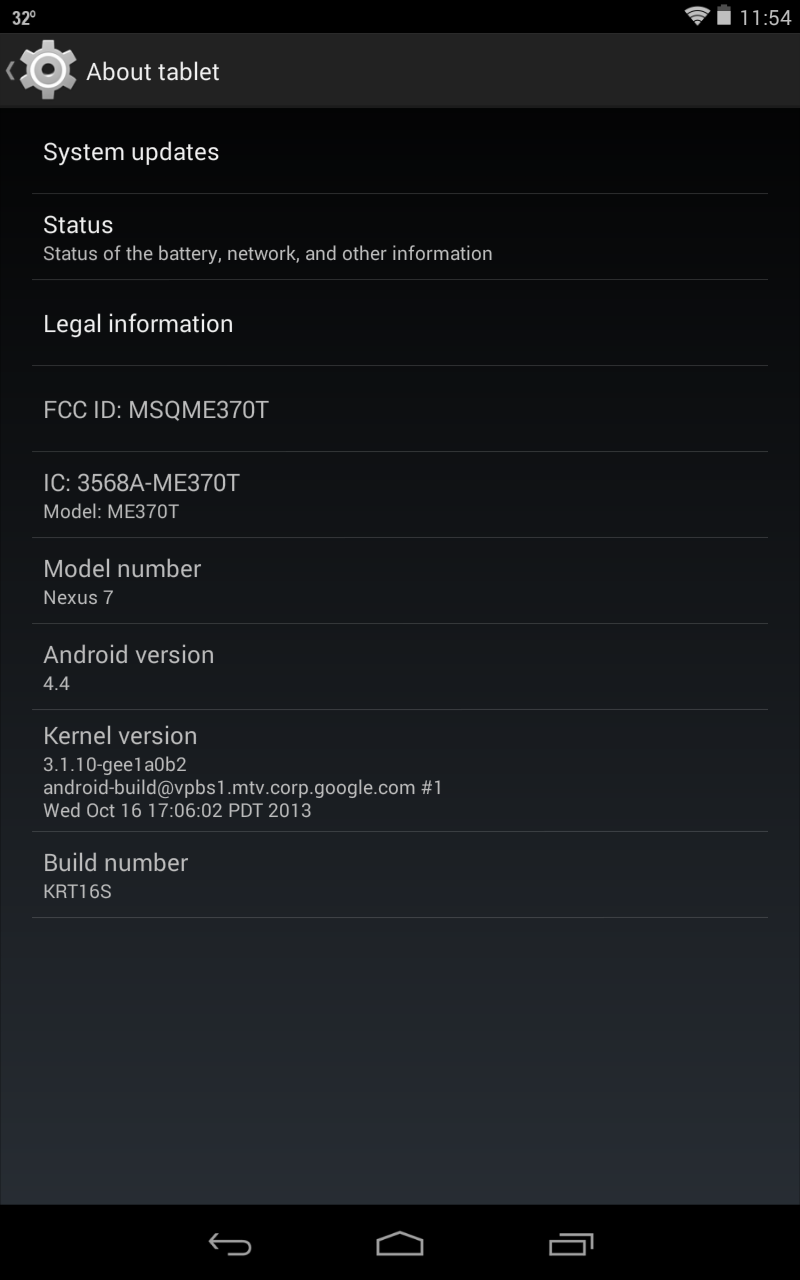 The top status bar is translucent and blends with your wallpaper. The new Google Now search had already been pushed to the Nexus and I had sideloaded the Google Experience Launcher (GEL) from the Nexus 5.