I seem to really have a soft spot for niche phones. I've had a Moto X , a Nexus 5, and a BlackBerry PRIV just to name a few.

I've done it again. I just bought an Essential PH-1. In late 2017 it was estimated that only about 50,000 had been sold. That makes the BlackBerry PRIV look like a runaway success at about 600,000 sold.

Essential was founded by Andy Rubin, the inventor of Android.

It's a gorgeous phone closely resembling the iPhone X in appearance and size. 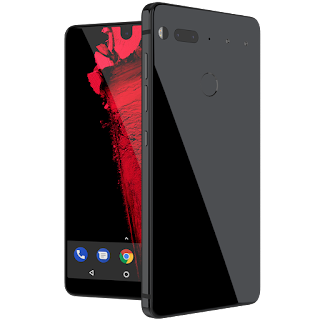 Here's how it compares to my iPhone 6s.

Then I sold it within a week.

I searched for a spring-clip belt holster without finding one. I know that is only slightly less geeky than a pocket protector but it is what I'm used to.

The PH-1 has a weak vibration motor like the OnePlus One.

I tried to use Dropbox to move pictures from the PH-1 to my PC. Most of the pictures I was saving were being texted to me so they were in Android Messages. Messages saves them in Photos / Messages and Dropbox wouldn't look there for the Camera Uploads process.

I like the physical muting switch on the iPhone. Android has a complicated "Do not disturb" process that involves stared contacts, downtime and priorities. I just want it to not make any sounds but to still vibrate.

The fingerprint reader on the Essential is so much better than the iPhone 6s. It's in a natural place and reads quick.

Both of my Bluetooth ear buds misbehaved on the PH-1. They tended to switch the audio between ears occasionally and then switch right back. It wasn't continuous and wasn't very frequent.

The PH-1 uses USB C for charging and earphones. I had to buy USB A to USB C cables. While this was a short term hassle, long term it is clearly the direction.

Android is not nearly as aggressive as iOS at throttling apps running in the background. Even after Oreo 8.1 GasBuddy used 10% of my battery capacity on the PH-1 and I had NEVER launched it. The flip side of this is that iOS doesn't give Google Maps' location services frequent GPS updates. This makes my Google Maps Timeline have poor resolution (more on this later). Similarly Google Maps often opens with the wrong location on the iPhone.

Android Oreo 8.1 is really improving battery life (after I uninstalled GasBuddy). Admittedly my sample is very small but the mAh/hour for the PH-1 on Oreo 8.1 was 68.5 compared to 52.8 for the iPhone 6s for the last 5 weekdays I tracked. There are more details here.

I can't believe I gave up a flagship Android for a 2 year old iPhone but I did.
Posted by Ben Moore at 7:54:00 PM 1 comments

One Hour and Six Minutes

I continue to be a huge fan of Android Auto and Apple CarPlay.

I still have Android Auto active in my Pilot all the time. I've gotten to where I input my destination any time I have to travel on the Interstate even if I know my route blindfolded.

Every now and then as I navigate I-240 in the Memphis area Android Auto will suggest getting off and then back on the Interstate to avoid a traffic slowdown. The savings are typically in the single digit minutes for a sub-30 minute drive.

Nice but no big deal.

However recently we were in Jackson, MS. As we entered I-55 I tapped the "Home" button on the Android Auto screen. It calculated a route and an ETA and off we went.

I have Android Auto muted except for traffic alerts. Within 2 miles Android Auto piped up with something to the effect "Due to a traffic slowdown on your route there is a suggested alternative route. This will reduce your ETA by one hour and six minutes."

Needless to say I took the alternative route. There was a wreck on I-55 that had it closed in both directions.

The alternative route had me exit I-55 and travel on a parallel surface road to the next exit. Reentering the Interstate there was no problem as there was no traffic coming from behind me. 😀

If your car doesn't have an Android Auto or Apple CarPlay head unit, look at this.
Posted by Ben Moore at 7:31:00 PM 0 comments

It's Not Our Fault

I follow the Internet Storm Center's diary. Recently one of the entries related a situation with a personal NAS (Network Attached Storage) with terabytes of data. It was configured with RAID5. The NAS vendor offered a cloud backup service that he used.

He had a detailed backup plan consisting of:

While this diary is about a personal situation the lessons apply to enterprise as well.

The power failed in his area and the NAS crashed hard. He reloaded the operating system and rebuild the RAID5.

No data was lost.

But then he had to “relink” the existing cloud backup with the new backup task on the NAS. That  failed with strange error messages saying that some files were not found.

After the normal "Turn it off and back on" with no success the vendor responded:


Thank you to try to log on your cloud service console to check if your files are available. If they are not available, please contact your cloud service support to get more help. We already notified them about this issue and we received a lot of complaints from other customers who are facing the same issue. You should try to see with them how to recover your files, if possible...

Remember that "your cloud service" was arranged by the NAS vendor.

What if that had been YOUR enterprise data?

Recently I was scanning some newspaper clippings. They were larger than the bed of my scanner so it took several scans to capture all of them.

One even took 4 scans. I was dreading trying to put those together to create a single image.

So I went to my favorite resource: Google.

One of the top hits was Gizmo's Freeware's page on "Best Free Digital Image Stitcher." I liked the price already.

The first entry in the list was Microsoft Image Composite Editor. I had never heard of that.


What is Image Composite Editor?
Image Composite Editor (ICE) is an advanced panoramic image stitcher created by the Microsoft Research Interactive Visual Media Group. Given a set of overlapping photographs of a scene shot from a single camera location, the app creates a high-resolution panorama that seamlessly combines the original images. ICE can also create a panorama from a panning video, including stop-motion action overlaid on the background. Finished panoramas can be shared with friends and viewed in 3D by uploading them to the Photosynth web site. Panoramas can also be saved in a wide variety of image formats, including JPEG, TIFF, and Photoshop’s PSD/PSB format, as well as the multiresolution tiled format used by HD View and Deep Zoom.

But it just works!

I downloaded the 64-bit version and installed it on my Windows 10. It stitched my 4 scans together seamlessly, let me rotate easily and then crop. Exporting was one-click (after I added ICE.exe to my Controlled Folder Access).

Where has this program been all my life?