I was all ready to install Windows 7 on my ThinkPad T42.

Before I could get around to it, the image on the T42 screen made a little swirling motion and froze. That pretty much wound up the T42. There was clearly something cracked inside. If you turned it off and let it cool, it would work for a couple of minutes then freeze again.

I managed to get all the data off it and ordered a T43 from Intechra. It came with 2GB RAM and a 802.11g WiFi card so I was in business.

I used the technique I had learned on the X40. Do a clean install of Windows 7. Then plug it into an Ethernet port and run Windows Update. Then for what's left, go to Lenovo/IBM. Everything works.

I was hoping for Aero capabilities but wasn't sure. After hours of Google searching, it won't do Aero. My first impression of Aero on Vista was that it was eye candy. Now after using it on a couple of systems, I really miss it.
Posted by Ben Moore at 9:07:00 PM 0 comments

Another Short Term Victory Over Spam

In that post I was amazed by a period where there was almost a 50% drop in spam. Recently I have measured a drop of more than 80%. 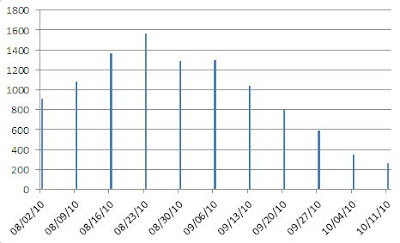 Again I turned to Brian Krebs for an explanation.

Given that my spam dropped in late August/early September I think the key point is in Brian's update near the bottom. In summary, two major spam botnets have been slowed down.