Geotagging Pictures on a Blackberry

I'm still a relative amateur on my Blackberry but I just cracked the code on how to geotag pictures taken on my AT&T Curve 8310 running OS 4.5.

I'd Googled this and never got a concise explanation. Here's how to do it.

When you go to the Camera on the Blackberry, hit Menu and then Options. Set Geotagging to Enabled. Go back to the camera. In the lower left corner is an icon that you can't figure what it is. It is a satellite representing GPS. A red X over it means no GPS signal. No red X means you've got the satellites. Now take a picture. Save it and press Menu and View Pictures. Use the trackball to select the picture you just took. Don't click on it. Look at the bottom left corner of the screen. I don't know what the green icon means but the white dot between that and the file name means it has location data. How obscure can they make this?

When you finish with the camera, I suggest hitting Menu and then Close to ensure that the GPS is turned off.

I use Picasaweb to share my pictures. You have to go into Settings and check "Show my photo locations to others" and "Use Exif location data." Now go upload the Blackberry pictures to Picasaweb and voila!
Posted by Ben Moore at 9:11:00 PM 0 comments

And The Answer Is... 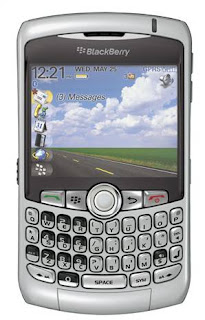 I gave in. It really shows how far the Blackberry has progressed to being a true smartphone since my 7290.

One of my overriding criteria is portability of data between the smartphone and PCs. The SanDisk Plus USB/SD card and Documents to Go solved that for the Treo 650.

The Motorola Q9h had Documents to Go as well but the media was a micro-SD card. Without carrying the micro-SD to regular SD adapter and a SD to USB adapter with you at all times you were fairly limited in connectivity. And the cable connectivity was a micro-USB. Whens the last time you've run across a micro-USB cable? Did you trip over a mini-USB cable (like the Curve uses) between your desk and the parking lot?

Both the Motorola Q9h and the Curve have good Bluetooth capabilities and I used them extensively on the Q to transfer files (remember the micro-USB). With the Curve I've mostly been using the mini-USB cable.

The Q used the same micro-USB cable for the external speaker connection. I use this extensively as I listen to podcasts to and from work. Whens the last time you've run across a micro-USB cable? (Is there an echo in here?) Needless to say, the Curve uses a standard 3.5mm connector. The Treo used a 2.5mm connector like a cell phone headset. I had to use a 2.5mm to 3.5mm adapter with it.

I've only added a few applications to the Curve. I added BB Notepad to read and create .txt files. I also added BuzzMe to make it ring and vibrate at the same time. Without this if you have it set to Vibrate+Tone, it will vibrate first then ring. Odd. I also loaded the obligatory Google Maps. Did I mention that these are all free?

All of these loaded over the air (OTA). I haven't really missed the 3G network of the Q. 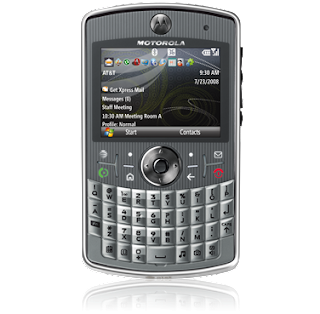