Recently I wrote about maps.ask.com. Today I'm going to talk about another piece of ask.com. ask.com acquired Bloglines a while back and leveraged them to enhance their blog search capability. The URL is not the friendliest - http://www.ask.com/?tool=bls so add it to your favorites. (Hint: http://blog.ask.com/ is easier to remember and does the same thing.)

How they use the Bloglines information is to "qualify" blogs for inclusion in their blog search. In other words, when you use ask.com's blog search, they only search blogs that are subscribed to using Bloglines. The idea is that this should raise the quality of the search results. Here's what they say about it:

Blogs and Feeds: Search the blogosphere using our unique algorithm that combines Ask.com search technology and Bloglines subscription data. We index the most popular blogs that people across the web subscribe to daily to ensure higher-quality results and minimizes blog spam.

To try this, I searched for "apple wifi driver vulnerabilities" using Google, Technorati, and ask.com. Here are the results: 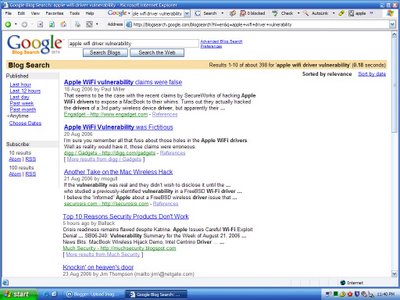 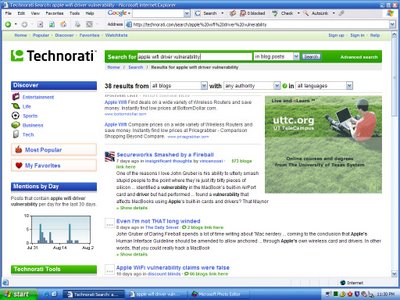 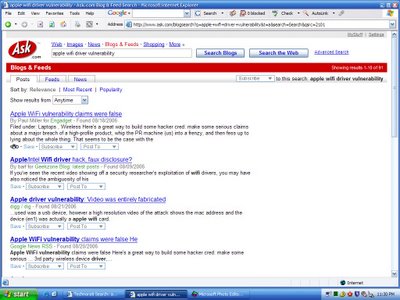 Even without going further than the first screen, I think ask.com has better results. But wait, there's more.

Look at the ask.com results. Do you see the little binoculars beside one of the entries? Hover over them and voila! 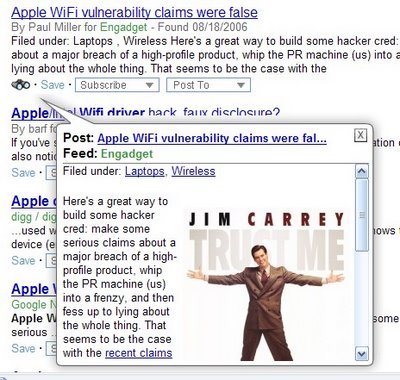 Without even leaving the search results page!
Posted by Ben Moore at 11:39:00 PM 0 comments

Obviously I'm a fan of Google and therefore Google Maps. If you've seen my blog WhereIveBen you'll also see that I use Windows Live Local.

One mapping capability that I hadn't found was the ability to set specific waypoints along the way thereby sending the route along something other than the shortest/quickest route.

I had found Harley-Davidson's Ride Planner but that was really hard to use as you had to give it a specific street address for every waypoint (or at least that was the only way that I could find).

Then last week I came across a blog entry talking about ask.com's maps. The part talking about maps is some ways down in the entry.

I played with it yesterday and I like it! To set a waypoint, you just right click on the map and it locates the closest reference point. It could be a street address (like Harley's Ride Planner) or it could be an intersection (which is just what I wanted). You can also just drag a waypoint to wherever you want it.

I used it to lay out a motorcycle ride and here it is. Yeah, it's not a tinyurl but it works. 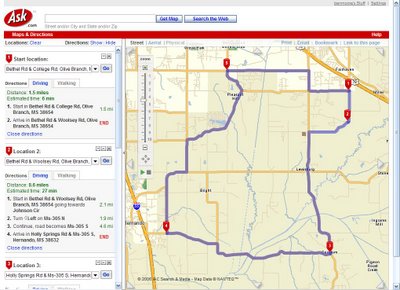 ask.com's maps has satellite imagery and even a topological view but doesn't seem to have any maps outside North America.

Another time I'll tell you about ask.com's blog search and why it's different.
Posted by Ben Moore at 8:16:00 PM 0 comments

Spam has taken a turn and not for the better. I've been using K9 for a couple of years and it's been doing great.

However, recently spammers begun putting their message in an embedded gif. Then they throw a lot of random text in the body to confuse the Bayesian filters. Unfortunately, it seems like they're being successful at it. Look at the following statistics report from K9: 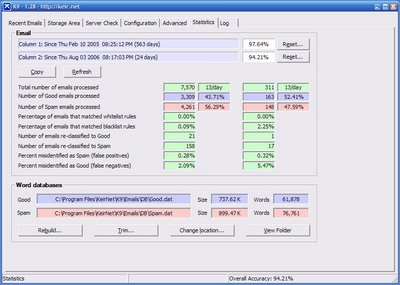 This afternoon when I checked my e-mail, I had 5 messages. All of these were this type of spam. K9 correctly identified 2 of the 5 as spam but missed the other 3.

A friend's blog had a entry last week asking for ideas on:

I want to store contact information (email addresses and cell phone numbers) somewhere that is (1) secure (2) immune from losing the information (3) free. What are your suggestions?

He had lost his cell phone a while back and with it all his names and numbers.

I commented and mentioned my beloved Cardfile program but as I wrote the comment, thought of using KeePass.

I started it up and looked around. I realized that I could create a folder in KeePass (I called it "Names and Addresses"). I put the name in KeePass' "Title" field and the body of the entry in the "Notes" field. This gave me a view very much like Cardfile. 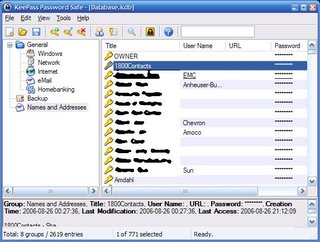 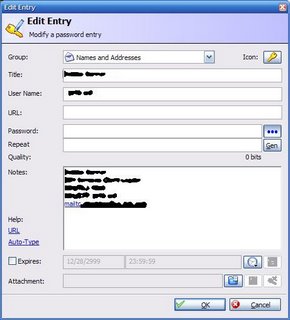 I went through pure Hell converting my Cardfile entries to CSV format to import but they eventually came in cleanly. Look at the screen shot above - I made the e-mail addresses mailtos and they even come through as hyperlinks.

Now all my names and addresses are strongly encrypted on my USB key and backed up to the hard drive each time they're changed (keeping 3 old copies). KeePass runs from the USB key without installation on any version of Windows.
Posted by Ben Moore at 9:07:00 PM 0 comments

Years ago, I was trying to create a CD for a customer to hand out as samples. She wanted it to automatically run when inserted. I had created her a lot of content as a web site so I wanted to reuse as much of that as possible. I decided to just load her web site onto the CD and make it autorun the index.htm page.

Wasn't as easy as it seemed. The situation is that the autorun.inf process will only "run" executables. One way to work around this is to use the "start" command.

The downside of this is the DOS command window flashes by.

I finally found a program called winstart.exe from a guy in Australia. What this program does is launch whatever program is associated with the file you specify. This is confusing to explain but works very cleverly.

For instance, in my case I wanted to launch the user's browser and load index.htm. So my autorun.inf simply looked like this:

This causes the browser to open (without that unsightly command window flash) with the index.htm page.

I have squirreled away a copy of winstart.exe but when I sat down to write this, I went looking for a reference for it. When I Googled "winstart.exe" I got pages of hits talking about worms and viruses. The winstart.exe that I am talking about is NOT malicious.

The author (Jeff Turner) still hosts this on this page.
Posted by Ben Moore at 8:38:00 PM 0 comments

My wife has taken a new position in her job and has been working at home a lot of evenings. Her new work computer at first wouldn't acknowledge USB drives so we fell back to the old faithful floppy. We quickly filled up the first one and started on the second. Then we had to keep up with which was which. Shades of 1990!

I remembered that I had read about Microsoft buying FolderShare and making it available for free. I searched the blogosphere looking for negative comments on it. Surprisingly, I didn't find much negative chat. Most were glowing testimonials.

One theme that kept coming up was how easy it was to use UPnP to open the required ports on their firewalls. That was a red flag to me. I read the FolderShare FAQs carefully and they were full of weasel words, e.g. "To get the most out of FolderShare," and "The Satellite must be able to accept connections on at least one port to serve files via the web."

They had a place where you could submit a question to Support so I did. Suffice it to say that the same people who wrote the FAQs wrote the robotic e-mail responses, e.g. "it is important for you to enable the UPnP..."

By now, my patience was running thin. I found this blog entry that said "You don't have to open any ports on your firewall or do any special configuration; it takes care of everything for you."

What the hell. I just tried it. John Pattison hit the nail on the head. I just installed it on her work computer and played with it.

Oddly, before I could see all the options for sharing, I had to log into the same account from a second computer simultaneously. Then all the options were there. I shared her "My Documents" from her work computer and created a new synchronized folder on my home computer.

I could see her "My Documents" immediately on the second computer. Some of the blog entries I found suggested that sometimes it could take a minute or so to replicate. All I can say is that I haven't seen any delays.

Without ports open on my firewall, FolderShare has to be using a central server that each computer is keeping updated with the status. I presume that if you have ports opened, that the computers talk directly to each other without burdening the central server. This is probably why the FolderShare Support keeps pushing you to open ports.

The other neat thing I found is since FolderShare makes the files look like they're local on both computers, my Tivoli CDP thinks that they are local and includes them in its backup.
Posted by Ben Moore at 9:11:00 PM 0 comments

I've written about GoogleSightseeing a couple of times, here and here. I kept submitting sights but they only posted this one. I think mine are at least as interesting as the World's Largest 7 Up.