Here's another of those threads where the open source contributors take a "holier than thou" approach to users of their software.

This change nullified some simple about:config parameters that were widely used to basically turn off tab scrolling. The submitter of this "bug" said "Users can override this using userChrome.css if they absolutely want it. I don't think the prefs are worth it." userChrome.css doesn't ship with Firefox. You have to create it yourself then insert CSS code into it to reinstate this capability. Skip on down in the thread and see the uproar.

The author of this change submitted some sample CSS code that hadn't been tested and didn't work so even the author was having trouble implementing it! "Sorry, I didn't actually try it myself and got confused. This should work (although it's again untested):"

The good news is this is in a beta, albeit public.

This certainly gives some credence to concern over open source software in a corporate environment although similar points could be made over some of Microsoft's choices.

Hopefully this will all be cleared up by the time Firefox 4 goes gold.
Posted by Ben Moore at 10:17:00 PM 0 comments

With my shiny new TechNet Standard subscription in hand, my first target was my beloved ThinkPad X40. You'll remember I replaced the 1.8" hard drive with a KingSpec solid state drive.

I booted the USB drive and Windows 7 was installed in about 30 minutes.

Device Manager didn't look so good. Lots of yellow exclamation marks! I started Googling them one by one but came across one suggestion that was just too simple: Run Windows Update. Duh!

Since one of the exclamation marks was the wireless adapter, I plugged in an Ethernet cable and fired up Windows Update.

The video card wasn't recognized. Back to Google. It wasn't so simple this time. The Intel chipset the X40 uses simply doesn't have Windows 7 drivers.

There were a couple of people who claimed they had overcome this but there were almost always comments that that solution hadn't worked.

I finally took the simplest solution with no dissenters and tried it.

Now I have a 2.7lb. sub-notebook running Windows 7 with all the features working fine.

I have a lot of PCs around my house, 3 desktops and mumble, mumble laptops! I'm slowly becoming a big Windows 7 fan after my experience with Vista here, here, and here. The Big Honker is just humming along with Windows 7 Home Premium 64-bit.

On one of the podcasts I listen to Paul Thurrott mentioned Microsoft's TechNet subscription and even pointed to a coupon to lower the cost to less than $300. In a recent podcast, Paul mentioned Microsoft has announced a new TechNet Standard subscription for $200. Rather than me rehashing all the work Paul has done, here's his post on this.

I bought a TechNet Standard subscription and have started using it.
Posted by Ben Moore at 5:19:00 PM 0 comments

I have Comcast cable service in the Memphis market. For a set top box I have an Cisco RNG200 HD DVR.

This morning when I came into the den, the face of the DVR didn't show the clock. Odd. I powered it up and it took a little longer than normal and then gave an error screen saying something like that the network wasn't available.

I had been watching QAM on my KWORLD SA290-Q LE so I knew that the cable-ready was working. I turned it off and went on about my business.

This afternoon when I returned home the clock was back so I figured everything was Ok. Wrong.

Later in the evening when I went to look at some recorded programs I discovered that all my programs and programming were gone!

I called 1-800-COMCAST and went through the obligatory 20 questions only to be told that they were too busy to talk to me. I immediately started pressing 0 over and over and ended up listening to Muzak (or some cheap equivalent).

When the representative came on she told me that Comcast had pushed an update to the Cisco RNG200s overnight and it had been unsuccessful. The result was that all of them were WIPED! I whined some and she agreed to give me a credit for a month of the DVR service of $15.95.

I can't believe that no one has commented on this! If this happened to you be sure to call Comcast for your credit.
Posted by Ben Moore at 11:20:00 PM 0 comments

Surely you've read the hoopla over the recent Flash vulnerability. The official download link is here. But if you're like me, you don't want to install an application just to get a patch so the direct download links are here.

Now that that's out of the way, there's something new in Flash 10.1. Hardware acceleration has been turned on by default. If you know what that means I'm sure you're excited. If you don't (like me) you'll also be excited when your power settings are ignored and leave your screen on all the time. 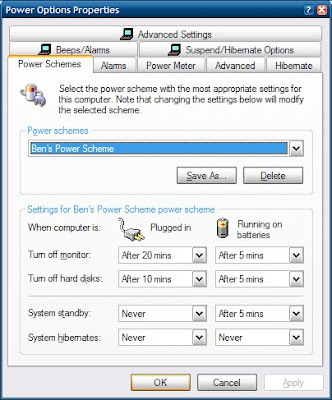 Not to worry. It's easy to fix. Bring up a page with Flash on it. Right click on the Flash object. Select "Settings." Click the leftmost tab at the bottom. Uncheck "Use hardware acceleration." Click on "Close."

Remember last summer when I blogged about geotagging? I'd had to work some to capture my lat/lon information and associate it with each photo. That worked pretty good but I wanted something simpler.

My Casio Exilim EX-Z1000 was only a 10 megapixel and only 3x optical zoom.

So I went Google shopping last Christmas and came up with the Samsung CL65 (ST1000 in Europe).

The CL65 has 3.5" touch screen LCD. It has Bluetooth and Wi-Fi along with built-in GPS. It has software on the camera to directly upload images online or e-mail them via the Wi-Fi. It's 12.1 megapixels with a 5x zoom lens. Oh, and the video recording is HD.

When I started looking it seemed to also be made of "unobtainium." I got on a waiting list at Rocket Camera. Their BBB rating doesn't look so good but I didn't have any problems with them. They had a good price and gave me good service. Caveat emptor.

The camera is awesome. The touch screen took me a little getting used to as I seemed to touch the screen accidentally while I was holding it. Other than turning it off, there is no screen lock. The GPS isn't AGPS like your phone so it takes a little while to find the satellites when you first turn it on. When I was in a situation where I was likely to be taking frequent photos, I just kept turning it on and off to keep the GPS sync relatively fresh.

I don't like digital zoom so I played with the settings until the digital zoom was disabled. Unlike the Casio, there isn't an obvious setting for this and I don't know which setting I changed to disable it but I think it was the image stabilization that did it.

Speaking of settings, the Casio has a lot more of pre-programmed scenarios. The Samsung has only 13. I don't use these much and all the ones I looked for were there, e.g. sunrise.

The Samsung charges with a proprietary (and short) USB cable. This cable also presents the MicroSD card as a USB drive to the PC. Just don't lose this cable. I haven't had any problems with the battery life even while running the GPS all the time.

The Samsung's 5x optical zoom is all internal. What this means is that the lens never protrudes from the camera's body. Nice.

I can't get the Wi-Fi to connect to my WPA/WPA2 network on my D-Link WBR-2310 router. I called Samsung and they weren't much help. It connected when I turned off security but that wasn't acceptable. I did get it to connect at my daughter's house and at her mother-in-law's house.

I've taken hundreds of snapshots with the Samsung but hadn't traveled with it to exercise the GPS until our recent trip to Bainbridge Island. Picasaweb does a great job of presenting the lat/lon for each photo. All went well until just before this photo.

That's when I dropped the Samsung into my soup! Luckily I had the camera all set before I handed it to the waiter so the picture turned out fine. The camera wasn't so lucky. It had landed screen down. Initially the touch screen wouldn't respond at all. Slowly it began working better and better and eventually seemed fine.

It worked great all the rest of the day but the next morning I got up early to take photos of the sunrise and it was cold outside. After about 30 minutes out in the cold the touch screen quit again.

Luckily Father's Day was coming up and the CL65 was much more available. My wife got me a new one and I've applied all my settings to it and am ready to go.
Posted by Ben Moore at 4:06:00 PM 0 comments