Each week I volunteer at a mid-sized non-profit in Memphis. I basically do break/fix stuff. When I arrive, they have a pile of PCs for me to fix/reimage.

Two weeks ago, they had a Compaq 6510b laptop that had had a hard drive crash. They had sent it out to have the drive replaced and my job was to reimage and install the local applications, e.g. Acrobat, Java, Office 200x.

I dove right in but immediately notice that the system was slow, REALLY slow. It is a Core 2 Duo 2.20GHz with 2GB or RAM so it shouldn't be slow.

Since it had a new hard drive, I suspected that. I ran HD Tune's benchmark and as expected the HD was much slower than the other reference systems I had. The facility manager returned the system to the provider who had replaced the drive.

They replaced the drive and returned it. I retrieved it and the power supply and began working on it. It was still running extraordinarily slow. The hard drive benchmark showed that it was as slow as before. I checked all the Device Manager settings as well as the BIOS settings with no solutions.

Finally I Googled "compaq 6510b slow hard drive" and on the second page came across this link:

This describes a user who had a problem with the power supply giving an incorrect signal to the laptop making it think it was about to run out of power and hence "cutting back on CPU/mainboard frequency to conserve power."

It seemed too simple but I unplugged the power supply. The laptop was transformed. Opening a new tab in Internet Explorer was instant. Plug the power supply back in and it once again slowed to a crawl. On battery, the hard drive benchmark now reported more than 60MB/sec.

One day I remembered that there had been a similar situation with the original iPhone. There's an Apple store nearby so I dropped in looking for a cable. 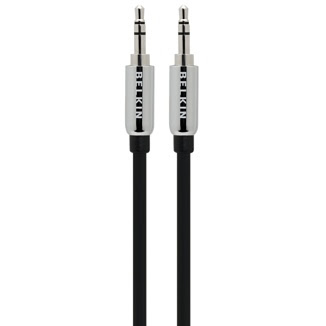 I did notice that it was made by Belkin. So when I got home, I went and looked at Belkin's site. This looked like the exact same item without the Apple brand. 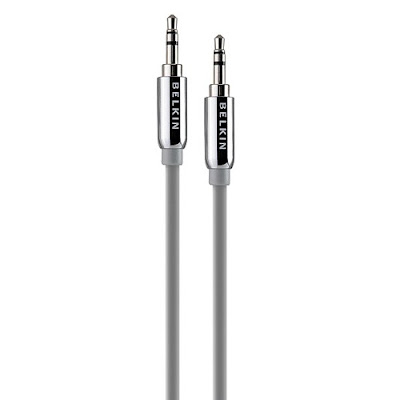 I finally bought it at Amazon. 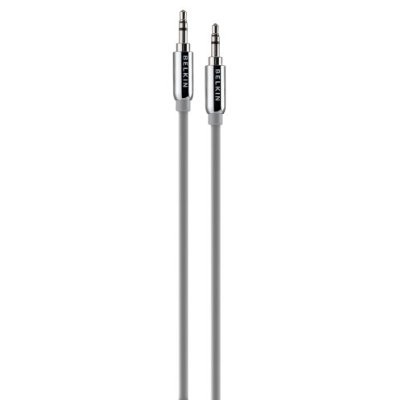 Sometimes it's the simple things that make your day. Just go to TinyMailTo. You'll understand.
Posted by fastoy at 10:56:00 AM 2 comments

The Drobo Is Hungry

Two years ago, I got a Drobo for my birthday. It is still serving me well.

Initially I populated it with 2 400GB drives. 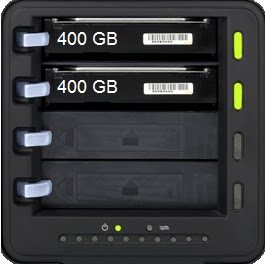 That gave me 371GB of protected storage. 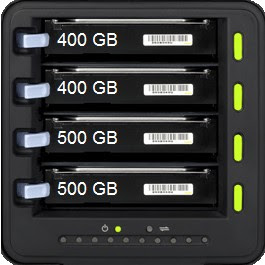 Looking towards Santa's visit this year, I bought a 1TB drive on Black Friday. To install it, I just popped out one of the 400GB drives. The remaining 3 drives began blinking orange. I slid the 1TB drive into the now open slot. In a few seconds all 4 drives were blinking orange and green. After about 6 hours, they were all green again. 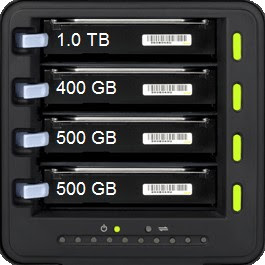 This only took me to 1.3TB of protected storage due to the asymmetry.

After Santa makes his visit, I'll replace the remaining 400 GB drive with a second 1TB drive. 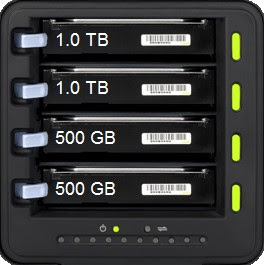 That's nudging right up against the 2TB limit of USB 2.0. Although the Drobo will present 2 drives to the host if it goes over 2TB.

But wait, if I replace one of the 500GB drives with a 750GB drive I get 2TB protected storage. 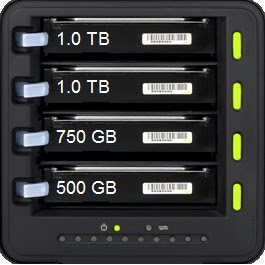 With my new (to me) Bold, I wanted to try the Gmail application for the BlackBerry. My first impression was WOW!

I loved that it pushed to the BlackBerry. You could archive from the BlackBerry and it would be archived on the Gmail server. You could even see sent messages! And messages were presented in conversation view. It even put an alert in the profile that you could manage just like BlackBerry e-mail, i.e. it'd blink the notification light.

But there are downsides. First the new message formatting isn't very good. This is a message that I wrote on the BlackBerry as it is presented in the Sent label on the Blackberry. 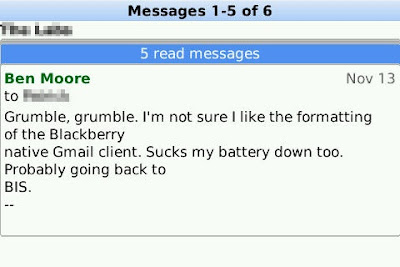 Ooops! There's a spoiler in there.

When you view it on a PC, this is how it is rendered: 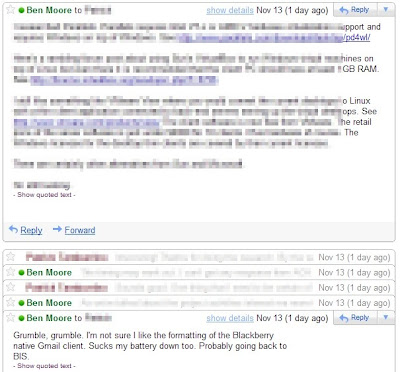 The top of this conversation thread was composed on a PC. This shows the contrast between the compositions. It looks like the Gmail application inserts a hard carriage return at the end of each line. Not shown here is that the Gmail application doesn't honor the Labs "Signature tweak." It does honor your signature, just not the tweak.

I also use Google Voice. When I got a Google Voice voicemail notification, I went to click on the "Play message" link in the e-mail. 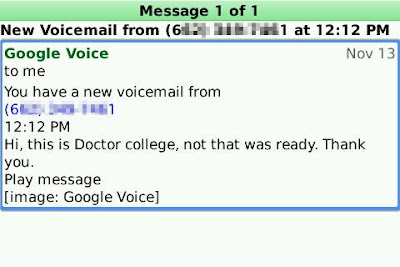 It isn't a link! It is in the standard BlackBerry e-mail client. To play this message I had to go to the browser and login to Google Voice and play it from there. There is a Google Voice client for the BlackBerry that I haven't played with.

The "push" from Gmail wasn't more or less timely than the AT&T BIS push.

Now back to the spoiler. On my Curve, most of the time I could go 2 days between chargings. With the bells and whistles of the Bold I wasn't expecting so much. I got worse. By the end of the day, the battery indicator on the Bold had turned yellow. I asked my son-in-law about this and he said that he had often been able to go 2 days. Hmmm. Wonder what it was? I stopped the Gmail application and at the end of the next day the battery was at 70%. I think I found it.

I've gone back to the standard BlackBerry e-mail client.
Posted by fastoy at 10:59:00 AM 0 comments