Everybody knows how fast hard drive costs are dropping, don't they? But really, let's look at the figures.

Here's a chart from That Data Dude. 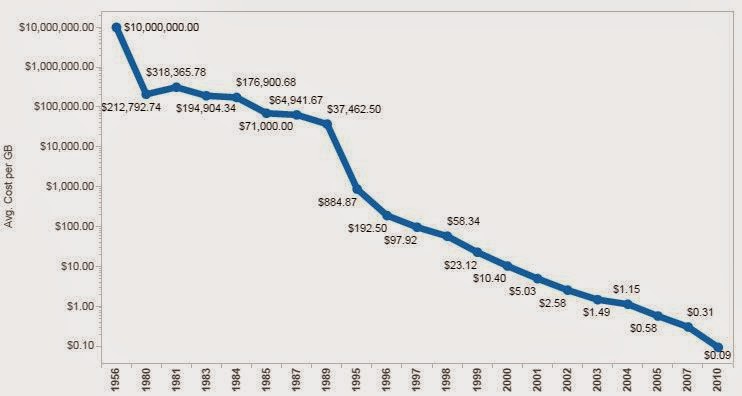 Impressive. But look closer. The "Avg. Cost per GB" scale is logarithmic!

Looking down at current costs they are pennies per GB. Several organizations with deep pockets have started offering "free" storage.

Can You Afford for Google to Fail

I guess that headline got you to read this! No, I don't see Google failing as an organization anytime soon. What is evident though is that Google is part of the "Fail Fast, Fail Often" culture.

Google, like many other Silicon Valley companies, tends to iterate through products rapidly. Google so much that it precipitated a meme around Google's Graveyard.

That may be good for Google but is it good for you?

Even though I'm a huge Google user, I've joined the hue and cry about this.

One of the podcasts I listen to regularly is Speaking in Tech. While this is principally enterprise focused, episode #138 covered a couple of Google consumer issues. At 3:47 Greg Knieriemen goes off on Android Lollipop. Then at 10:47 the discussion turns to Google in general.

Sarah Vela puts a point on it.


(Google) can afford to fail in places where their users invest and then (the users) get burned. It makes me a little weary.

There's been a big story lately on a hack of Sony Pictures. Terabytes of sensitive data were exfiltrated and posted publicly. There're several theories about the motivations behind this but I want to focus on the security practices. Let's be slow to throw rocks because this could be you.

I'm a big proponent of leveraging size to reduce cost. Sony, Sony Pictures' parent company, had consolidated security management into its global organization. At first that seems like a good idea.

But the result was that the global organization couldn't/didn't focus on local issues. The global team was failing to monitor 149 out of 869 of Sony Pictures systems in their scope. That's 17% of the systems unmonitored.

It is not known if the penetration leveraged any of these unmonitored systems but they certainly were vulnerable.

Lesson: Cost should not be a primary consideration in IT security decisions.

There were also several issues that emanated from the leaked data. In the data were hundreds of RSA SecurID tokens, Lotus Notes IDs, passwords, and certificates - many of them with the required passphrase. One of the certificates was a certificate Sony Pictures used to sign code. Its password was the filename.

Lesson: Lock up the family jewels.

One of the other firestorms has been the content of the leaked e-mails. Beside all the sensitive business discussions were some pretty damning dialogs concerning actors and actresses.

Lesson: Have a policy about what is allowed in e-mail and recurrency training on the necessity of this policy.

Finally, face up to the fact that your company will be hacked.

Articles that I used in this post:
Gizmodo
Forbes
CSOonline
TechTarget
TechTarget
Posted by Ben Moore at 8:18:00 PM 0 comments

A random article in my feedly recently caught my eye. The headline was "H-P Moves to Retain Corporate Customers Ahead of Breakup." Well surely they would do that. So what? But I read it anyway.

(This article is in the Wall Street Journal and behind a paywall but if you Google that headline and click on the link from there you'll see the entire article.)

Stop now and go read it yourself.


The Palo Alto, Calif., company said it would offer versions of two computer server lines under H-P's Integrity moniker - Superdome and NonStop - that will be powered by Intel Corp.'s Xeon chips...

These Integrity systems now use Intel’s Itanium (formerly known as Merced) chips. They are pretty much the only users of these chips. At one time even Microsoft supported the Itanium chip.

This was in the era of system vendors differentiating themselves with their own chip architecture. HP previously had PA-RISC. DEC had Vax and Alpha. Sun had SPARC. IBM had PowerPC.

But this isn't a history lesson.

This is the end of purpose built processors. The Intel x86 has won (for now).

The Itaniums ran HP-UX, a version of Unix.


H-P is encouraging customers to move to the Linux operating system...
Antonio Neri, SVP and GM of H-P's enterprise group

Read that again. "H-P is encouraging customers to move to the Linux operating system..."

And on Intel X86 processors.

They have gone from having a differentiating processor and operating system to being just another vendor of Linux and X86.

Sure they can put some lipstick on it with lots of processors and lots of salesmen but it'll still be just another Linux and X86 system.

Update: I shared this with the Unix manager at a Fortune 100 company. His comments:


I guess my take is this……. At least they actually documented a direction….. been struggling to figure out where they were headed for a couple of years now.

We’ll still shut them down as fast as we can though, just another O/S and vendor to manage…..