There are several changes to the Start menu in Windows 10 1809 but this one I haven't seen mentioned.

In Windows 10 1803 if you click on the Start icon and type an application name, it'll pop up. Click on it and it launches. 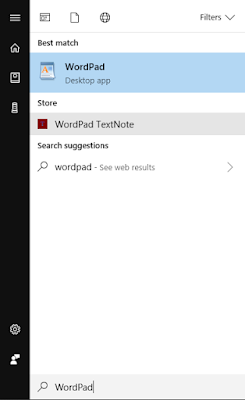 Yeah, it'll still pop up the application name but look at the other information that's presented. 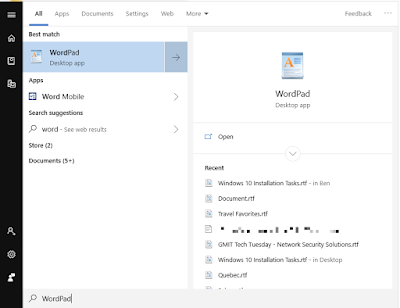 You can directly click on one of the recent files that have been used with that application.

Since at least Windows 7, Windows has had a Snipping Tool. I've always accessed it by pressing the Windows key and typing "snipping". Or you can press Windows key + Shift + S, then drag your cursor over a portion of the screen to capture it. The Snipping Tool had some simple mark-up tools.

If you click on the notification you'll see the UWP app with the editing tools. 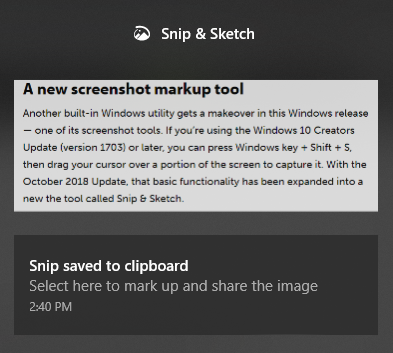 These are much more capable than those in the pre-1809 Snipping Tool. 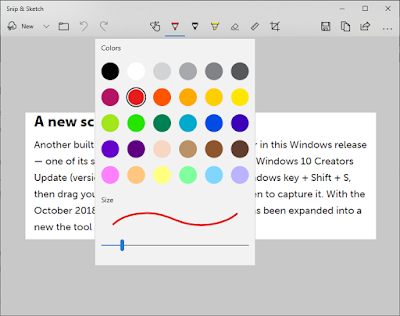 It's simple but certainly a nice improvement.
Posted by Ben Moore at 7:48:00 PM 0 comments

As I wrote back in October, I had hastily installed Windows 10 1809 just before Microsoft pulled it. I still haven't had any problems with it.

However I came across this post that pointed out that those PCs that had installed Windows 10 1809 hadn't gotten ANY updates since the October Cumulative Update.

This is significant as Microsoft has merrily been fixing the numerous problems discovered in Windows 10 1809 and pushing out new builds to Windows 10 19H1 through the Windows Insider Program.

So I wanted to get updated. But not jump into the fire with Windows 10 19H1.

In the above mentioned howtogeek.com post, a thread in the comments pointed me to a windowsupdate.com URL that contained the CAB file for Windows 10 1809 build 17763.107. Search the comment thread for KB4464455v2.

Microsoft has apparently had problems even with that as there are 2 versions of KB4464455.

To save you some trouble, here's the URL:

Now, what to do with a CAB file?

As has become typical with Windows 10 1809, nothing is easy. You have to use Microsoft's DISM to install the CAB. Here are the instructions.

You're going to have to think about this one some.

Think about how any anti-virus program has to parse all the files on a system. A parser could inadvertently enable arbitrary code execution if that parser has any vulnerabilities.

Run the parser in a sandboxed environment where malicious actions are limited to the sandbox thereby protecting the rest of the system.

Microsoft's Windows Defender does this.


In other words, the Windows Defender antivirus process that analyzes downloaded files and other content will run with very few permissions.
How-To Geek

But it's not turned on by default.

To enable this feature click on the Start button, type "CMD", right click on "Command Prompt", and select "Run as administrator". Enter the following command:

Then restart your PC by holding SHIFT while you select Shutdown or Restart on the Start menu.