Years ago (exactly how long ago in a minute) I recorded a short WAV file that I used as an announcement that my daughter had gotten on AIM.

When I upgraded to Windows 7 I set this as a pidgin Buddy Pounce. But it didn't work!

Oddly Windows Media Player would play it but Media Player Classic wouldn't nor would Windows 7 play it as a system sound. Hmmm. 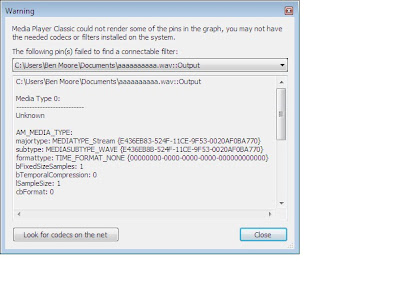 It wasn't on the first page but on the second page was this link.

That held the key and the solution to the problem.

I fired up AudacityPortable and opened the old WAV file. Then I exported it as a WAV but obviously Audacity used a different codec.