I play with so much stuff that sometimes I forget what I've come across.

Tonight I was going to copy a CD. I stuck it in drive E: (dutifully holding down the Shift key) and a blank CD in drive D:. I opened Windows Explorer and right clicked on E: to explore it. I didn't want to double-click and run the risk of autorunning it. When I right clicked, in the context menu was "Copy CD to CD." 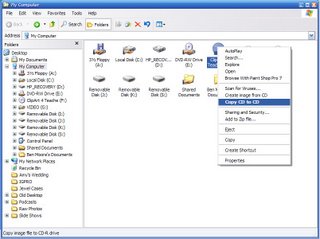 Where did that come from?

Well, that was what I wanted to do so I clicked on it. 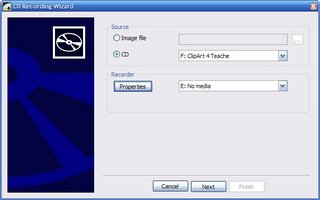 So far so good.

There was no help so I clicked the icon in the top left and got an "About." 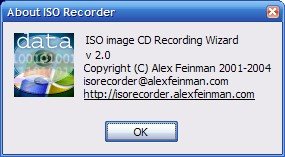 So off I went to the web site.

Welcome to the ISO Recorder download page. ISO Recorder is a tool (power toy) for Windows XP, 2003 and now Windows Vista, that allows (depending on the Windows version) to burn CD and DVD images, copy disks, make images of the existing data CDs and DVDs and create ISO images from a content of a disk folder.

ISO Recorder has been conceived during Windows XP beta program, when Microsoft for the first time started distributing new OS builds as ISO images. Even though the new OS had CD-burning support (by Roxio), it did not have an ability to record an image. ISO Recorder has filled this need and has been one of the poular Windows downloads ever since.

With an advent of Windows XP SP2 and Windows 2003 the version 2 of ISO Recorder has been released, which intorduced some new new features including ISO creation and support for non-admin user.

Since the very beginning ISO Recorder has been a free tool (for personal use). It is recommended by MSDN download site along with Easy CD and Nero and is used by a number of companies around the world.

A couple of weeks ago, I wrote about the problems I was having with a Western Digital 250GB. These continued. I finally downloaded their Data Lifeguard utility and ran it. Interestingly, it will run against a USB-connected drive so I didn't have to move the drive over to an IDE connection.
So I ran its extended test. It took 16+ hours. Here's the result: 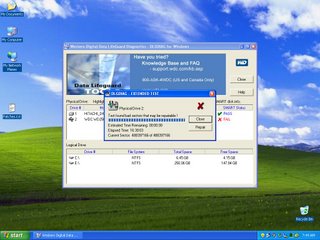 Notice in the background that the SMART (Western Digital uses it without the periods so I will too) status is X FAIL. It did say that there were some bad sectors that "may be repairable!" I clicked on "Repair" and it completed immediately. Seemed odd to me but what do I know?

So then I ran their SMART display again and it had a X next to Raw Read Error Rate and a 1 in "Warranty." Still, they said they repaired the bad sectors. 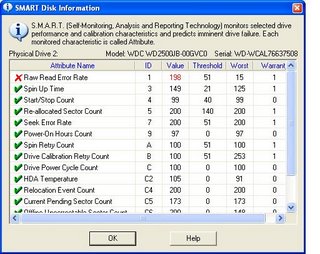 So I ran the extended test again. Again, it took hours, overnight actually. However, this time it didn't find any errors. Whew!

I went to Windows and reformatted the drive. Another run that took hours and hours but no errors.

So I ran their SMART display and more Xs and 1s under "Warranty." 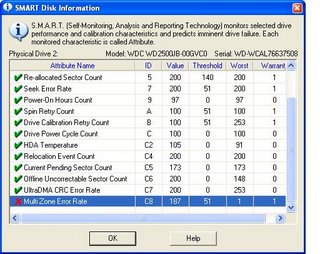 I printed off these SMART reports and packed this drive up and sent it to Western Digital. The replacement should be here tomorrow.

So today I went to my desktop (SERVER) and began using VideoReDo to edit out the commercials in a bunch of programs I'd recorded. It seemed to me that the system was being sluggish but nothing else was running.

I downloaded HDTune and ran it against the 120GB Seagate. 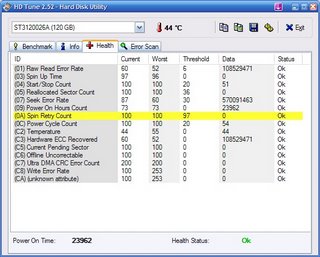 Look at those HUGE numbers under things like "Raw Read Error Rate" and "Seek Error Rate." So I downloaded Seagate's SeaTools. It created a bootable diskette and I ran that. "No problems." Yeah, right.

I called Seagate yesterday and spoke to Mick. Mick was very knowledgeable on this drive and the error indicators. He said that Seagate doesn't use the SMART counters in the standard way so that the results of HDTune weren't accurate. I asked him how I could display the recoverable error counters. He said that they didn't make that available. The only diagnostics the customer can run are the SeaTools. Hmmm.

Just to make sure I wasn't nuts, I ran HDTune against my boot drive, the 60GB Western Digital that came in this HP system. 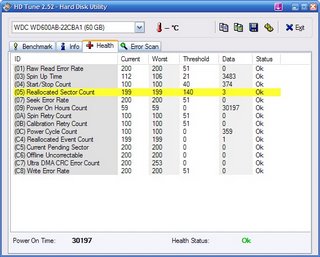 Can you say "Clean as a whistle?"

And to make my day a total mess, I ran HDTune against the 80GB Seagate on my SageTV box. 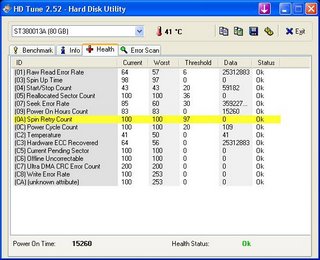 Now I think I understand why this box seems slow at times. With HDTune, I could actually sit and watch these counters increase. For you faithful readers, this 80GB Seagate is the same as the one mentioned here.

So, now what? Right now, I'm just wringing my hands. I have a couple of conclusions and still some questions.

Have you tried Google's Picasa Web? It came out a couple of weeks ago. Initially it was by "invitation" only. Technically, it still is but it seems that you get your invitation immediately. You'll need a Gmail account and then go to http://picasaweb.google.com.

You'll get 250MB of storage for free. You can bump up to 6GB for $25 per year or use more than one Gmail account. Looks to me like 250MB will last a while. More on that later.

In a nutshell, all you have to do from the Picasa desktop client is to create an album and click on the "Web Album" button.

You get a prompt about what size to upload. Just let that default. Picasa will resize the pictures and upload them to Picasa Web.

You'll notice that the URL has my Gmail e-mail address so you may want to setup another Gmail address for photos (and darn, you'll get another 250MB for each one that you setup).
Posted by Ben Moore at 8:14:00 PM 1 comments

How can I run a scheduled task without a password?

This is v2 of this post. I wrote this a couple of nights ago and waited to post it until I had tested it. See, I can't be wrong all the time.

What I was trying to do was to setup a scheduled task on my SageTV box to defrag. I set it up and kept getting "Could not start" errors. I googled it and ... Well, here's the v1 of this post.


I just love Google. Maybe that is just the Internet and the wealth of information on it.

I'm still working on getting my SageTV box up to "unlimited" storage. Until then, I'm stuck with only 80GB and with the World Cup games on, that's kinda tight.

While I know that defragmentation doesn't give me any more space, being tight on space creates more fragmentation.

I Googled "how can i run a scheduled task without a password"and found this link as the second entry:

So chalk up another problem solved to Google.

Oh, I didn't see the "Adminstrative Tools" on my Start menu so I just right-clicked on Start and chose "Explore all users". The link I needed was "Local Security Policy" in "C:\Documents and Settings\All Users\Start Menu\Programs\Administrative Tools". The target is "%SystemRoot%\system32\secpol.msc /s".


As Paul Harvey says, "Now for the rest of the story."

That didn't fix it.

What I didn't mention in v1 was how I setup the scheduled task. I went to Start/Run and entered "cmd" to get a command prompt. Then I entered the following:

When the above machinations didn't fix this, I started to dig deeper. What I found is a file in c:\Windows named SchedLgU.Txt. This is the log of all the executions (or attempts in my case) of scheduled tasks.

Here's what mine said:

Duh. I had the command in quotes and it didn't need to be. This is what it should have been:

Then I remembered WHY I had been doing this at the command prompt. If you use the "at" command at a command prompt to establish a scheduled task, it runs with Administrator authority and not your user account!

The fiddling with the security policy was completely unnecessary.
Posted by Ben Moore at 11:10:00 PM 0 comments

Remember my post a while back on technology available at Wal-Mart? And my recent post of the flat cat 5e cable from Wal-Mart?

Well, they've done it again. My son-in-law just bought a second monitor for his system at home and wanted a monitor "splitter."

Then I went to walmart.com looking. Amazingly, Wal-Mart had this for $14.97. 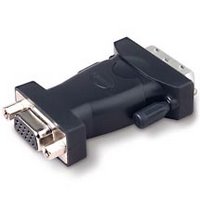 Since the pictures are slightly different, I went to belkin.com and searched to see the difference. I searched first for "F2E4162A" (CompUSA's reference) and then "HDDB15F" (Wal-Mart's reference). The results pointed to the same page!