How many times has a friend or relative asked you to look at their PC because it was running slow? When you bellied up to it you were shocked with all the crapware that had sneaked onto it.

We all have war stories about this but Fred Langa just wrote a great post on how bad it gets. You can read the post here.

While the goal of the post is to test Registry/system cleanup tools, the part I find most amazing is how much the crapware he used to test with slowed down the system.

In a nutshell he created a minimalist Windows XP image. Then he installed the software from "CNET’s list of the '20 most popular Windows downloads.'" While he links to that list, after reading his results I won't even link to that list.


I installed all 20 apps on the test system as inexperienced Windows users might over time - layering on the software without regard to consequence and accepting all default settings, including the offers of extra toolbars, download managers, and so on.

The results were incredible. The boot time went from 30 seconds to 629 seconds, over 10 minutes!

The good news is that when he uninstalled those packages the system pretty well came back. Boot times were still slower but nothing like 10 minutes.

You can read the article yourself to see what he found with the Registry/system cleanup tools but I just wanted to share with you his experiences with crapware.
Posted by Ben Moore at 9:03:00 PM 0 comments

I had run a flat Cat 5e cable from the SageTV box and the router. Over the years I used that same cable for the MediaMVP and then the Tivo Premier.

When we recently redid the floors in our house I had the installer run that same flat cable under the hardwood. His work was incredible. But ...

The operation was a success but the patient died. The cable didn't work. I ran my Ethernet tester on it and it was bad. I guess it couldn't take the glue and hammering of the floor.

So I was in a mess. The Tivo simply won't work without Internet connectivity. There's no reasonable way to fish an Ethernet cable between the TV and the router. So it was off to BestBuy.

The salesperson there was pretty good on the problem. She offered the NETGEAR - Powerline Ethernet Adapter Kit and the TiVo - Wireless-N Network Adapter.

My early thinking was to go with the Tivo brand wireless adapter so I'd only have "one throat to choke." Further thinking took me back to the NETGEAR Powerline kit as I could drop a switch in the entertainment center and support multiple devices.

Turned out the NETGEAR Powerline kit was on sale for $79.99 and I came home with it. 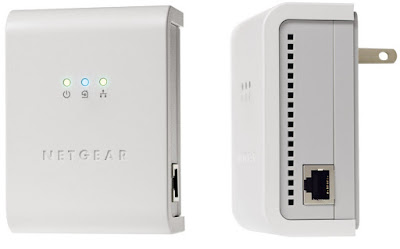 It couldn't have been easier to install. The instructions didn't even have any words. Just pictures.

It worked immediately and has continued to since installation. I haven't tested the speed because I really don't care so long as it's faster than my DSL. I'm not moving any local data across it.

If you go read the reviews at the BestBuy site you'll see that everybody raves about the installation. A few mention the speed (rated at 85 Mbps) and every now and then somebody will say that theirs died. I've only had mine a couple of days so I can't speak to their longevity.

If you've been under a rock lately here's a link that'll show you the background to the Microsoft-Android patent battle.

One part of this that hasn't been clear is what patents are in play. Microsoft has been requiring all parties who have agreed to their licensing to sign Non-Disclosure Agreements.

Barnes and Nobles (you'll remember they're the maker of my beloved NOOK Color) has rejected Microsoft's patent claims and has published the details of what patents Microsoft is claiming that the NOOK's Android uses without licensing.

Note that I'm not endorsing the editorial position of Groklaw but rather just using their post as an anchor of the legal material from Barnes and Nobles.

For deeper background here're links to articles from Microsoft and Google's patent attorneys.

Regardless of your opinion/bias on this issue these are all interesting reading.
Posted by Ben Moore at 1:57:00 PM 0 comments

Google Being a Pain

Ask any of my friends. I have been as staunch a user and supporter of Google products as there is. I actually bought my first Gmail account on eBay! I have moved my domain to Google Hosted Apps along with my daughter's. I'm in the process of moving my business' domain there. And what do I get in return? Ill thought out changes and slaps in the face.

Several of these (Calendar event colors, and some of Reader problems) are part of the new UI redesign that has been sweeping across the Google products since the introduction of Google+ and generally I like them. I'm just hoping that the nagging problems here are fixed in a refresh but ...

Others are more troubling.

The Calendar event colors are just stupid. There's been a huge wailing from the community and practically no response from Google. A couple of the Google Help forum posts are here and here. One of those is entitled "Give us your feedback on the new Google Calendar Look!" 475 posts later they've gotten feedback.

The Gmail formatting issue is much more serious. It seems that Gmail doesn't generate rich text, i.e. html, e-mail that is compliant with Microsoft Outlook (and other clients). The result is that there is a mixture of font faces and sizes in the sent e-mail that are not visible to the sender nor easily avoided. The principal Google Help forum post is here. This is a huge issue with business users who have migrated from clients such as Outlook and now are realizing that their sent e-mails may look unprofessional. The Google employees who have participated in this thread disavow any support of the Labs features which allow e-mail formatting which really rankles most users. My own experience is that this is a problem exclusive to WebKit-based browsers but there likely are several problems here.

After Google Docs upgraded their formats they have been suggesting to "Upgrade your document to the latest version of Google documents." Recently that yellow bar at the top of the screen can't be dismissed. My thread on this is here. There's a ton of reasons that people don't/can't upgrade their documents and many are suspicious that this is foretelling a forced upgrade.

I like the Reader redesign. They took away some of the sharing capabilities and re-instituted some of them in Google+. What has affected me is that PgDn (the Page Down key) doesn't mark the last couple of items in a feed as read. Irritating and clearly something that they didn't test. Recently there's a new red dot appearing in the bottom right corner as you scroll through the feed. Apparently that is an indicator that the feed is being updated but it serves no purpose other than to distract your eye to it. They should have used one of the new pastel colors from the Calendar event palate.

I also like the Gmail redesign. I was using one of their preview templates so visually not much changed. There are lots of new features under the covers though. Similar to the Docs nagging bars, Gmail has added a black bar at the bottom saying "Get Marketplace Apps | About the new look | Send feedback." Again you can dismiss it but it comes back.

Even the Huffington Post did a story on Google's "mistakes."

This is all coming at a bad time for me as I'm trying to convince my co-workers to move our entire business' web and e-mail to Google Hosted Apps.
Posted by Ben Moore at 3:49:00 PM 0 comments

Recently I posted about putting Android CyanogenMod 7 (CM7) on my HP TouchPad. It's running well and I wanted to share how it's been going.

It is still rock solid. I haven't had any Sleep of Death (SOD) since right after I flashed CM7. The Wi-Fi doesn't connect as easily as it should but frankly it connects as easily as my Nook Color also running CM7. Kinda makes me wonder if it's something in CM7. Anyway, simply swiping the notification bar and toggling Wi-Fi almost always allows the TouchPad to connect.

Other people are complaining that the battery life is not good. I haven't found that to be a big problem. I tested this the other day by fully charging and letting it sit unused with the screen off for 24 hours. The battery dropped to 72%. The Wi-Fi seemed to stay connected throughout the 24 hours as I heard it dinging when I received new e-mails. That's not as good as the Nook Color but certainly very usable.

I've gotten the BlueTooth paired and connected to my ThinkPad and been able to transfer files in both directions. I've used this to send videos to the TouchPad. I use Handbrake with the same settings as I use on the Nook Color. Looks great on the video player that comes on CM7. YouTube videos play fine, even HD.

I read that the Google Docs problem was fixed in the latest version on the Android Market but I haven't tested it. What I have is working fine.

Skype will run if you install version 6 but audio drops after a minute or so.

Swype is my preferred keyboard and there's a thread talking how to decompile the Swype bits and change the code and recompile and sign the resulting .apk. Whoa! Too geeky even for me. I found that version 3 (Swype_EN_NL_WVGA_v3.26.92.35406_flat_black_v5-signed.apk) works. It isn't as wide as the display but works fine.

I also installed QuickOffice and along with Swype this combination has made the TouchPad extremely usable. This week I was on the way to a meeting and received an e-mail with a .docx document relative to that meeting. I pulled up to a Starbucks, connected to their Wi-Fi (with no problem) and downloaded the document. QuickOffice opened it and rendered it properly. I proceeded on to the meeting and was able to participate in the meeting while referencing the document on the TouchPad.