This post is outside of my normal topics but I believe that it is important to share.

In July 2013 we traded our 2009 Maxima for a 2013 Nissan Pathfinder. The 2013 Pathfinder was the first year of a new generation of Pathfinders and is built on the Maxima platform. Mechanically and trim-wise it was very similar to the Maxima.

We get lots of compliments on the ride of the Pathfinder, especially from backseat passengers.

Several times while this was happening I drove to the nearby Nissan dealership and pulled into the service bay. A few seconds after I came to a stop and before a service representative could come over the light went off.

I eventually took it in to let them look at that problem. Of course, they didn't find a problem. And the problem persisted.

I took it back in and they found a water bottle under the seat and attributed the problem to that. And the problem persisted.

Then I read about a related recall. I took the Pathfinder back in and they applied the recall update. And the problem persisted.

I took the Pathfinder back in and they reapplied the recall update. And the problem persisted.

The service manager asked me to video the problem. I did and submitted 3 YouTube videos. After a week or so, one had been viewed 6 times and one twice (one was probably me) and the third one only once (probably me).

I finally made an appointment to have a Dealer Technical Specialist (DTS) look at the car. The DTS said that when the vehicle is started the sensors (There are two sensors on the left seat rail of the passenger's seat - forward and aft.) determine if there is a child in the seat and "classifies" this to the air bag control module. There are 3 conditions that can be "classified" - empty, child, and adult. When the gear shift lever is moved from Park the status ("classification") at that instant is retained. Subsequently if the vehicle comes to a complete stop (regardless of gear selection) for several seconds then this "classification" is repeated.


The DTS and the service manager were able to "manipulate" the car to leave the air bag status light displaying OFF by putting a partial load in the passenger seat and then moving the gear shift from Park to Reverse and subsequently to Drive. The light would continue to display OFF until they let the car come to a complete stop for several seconds.

They concluded that this "manipulation" was what was happening when my wife and other passengers were in the passenger seat. This is a characteristic of the algorithm of the air bag control module. It is related to the changes made by the recall but not the specific situation.

The DTS then said that this was "normal" and couldn't be repaired.

I filed a complaint with the National Highway Traffic Safety Administration (NHTSA) in June 2014. There were hundreds of related complaints.

The issue went through years of NHTSA bureaucracy and Nissan's pushback. All the while I had to adopt a deliberate startup process to ensure that the passenger airbag was engaged.

Finally in January 2016 Nissan notified NHTSA that there had been 3 injury accidents attributed to this situation and that Nissan was going to address it.

When I visited the dealership on June 22, 2016 I was told that parts wouldn't be available until August.
Posted by Ben Moore at 8:03:00 PM 2 comments

On "The Trump" I clicked on an html link and got the pop-up asking which browser I wanted to use. I chose Chrome. Then Chrome asked if I wanted to make it the default. I clicked that I did and went on about my business.

But I'm curious so when I finished, I clicked on that html link again.

No problem. I'll just go to "Choose a default web browser" and set it there. I chose Chrome and checked "Make it the default".

Still curious so when I finished, I clicked on that html link again.

A little Googleing turned up this forum post on a Dell site.


Open Control Panel, Search for Default and change it there.

Odd but it worked.

It may be hard to believe but I'm a technical minimalist. I'll go out of my way NOT to install software.


Virtual CloneDrive works and behaves just like a physical CD, DVD, or Blu-ray drive, although it only exists virtually. Image files can be "inserted" into the virtual drive from your harddisk or from a network drive by just a double-click, and thus be used like a normal CD, DVD, or Blu-ray

And I've been using DVD Decrypter for even longer. I primarily use it to burn DVDs from ISOs.

So when I built "The Trump" I installed them both as usual.

But I didn't need to.

Right clicking on an ISO gives a menu that includes "Mount". 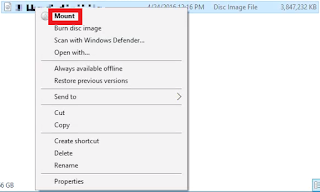 So I don't need Virtual CloneDrive.

And the next entry in that menu is "Burn disc image". 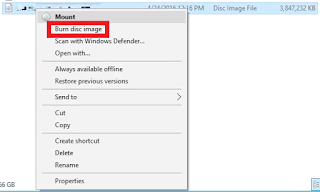 While there are probably some features of those programs that you don't get with native Windows 10, it certainly meets all my routine needs.

2 pieces of software scratched off my list.
Posted by Ben Moore at 7:46:00 PM 0 comments

Clash of the Titans

Two recent stories have more connection that seems obvious at first.
Do you see the connection/conflict?

Just remember that all of their revenue comes from you one way or another.
Posted by Ben Moore at 7:20:00 PM 0 comments