After my recent posts on Dancing Pigs and Almost Chrome I've pretty much switched completely to Chrome. Today was the final nail in the coffin. Mozilla announced the End of Life for Firefox v3.

As far as I've seen nothing has been resolved with the tab width issue. Chrome still has the Gmail formatting issue but I've mitigated it somewhat by turning off the Default Text Styling Lab. The resulting e-mails are not as pretty but they've all had consistent formatting.

Firefox 10, 11, 12, or whatever it is today still suffers with the extensions version problem. The Internet Storm Center has a good diary on this issue.

Late last month I traveled to Boston and stayed at a Hilton owned property. Hilton has sold their hotel Internet business (including Wi-Fi) to AT&T Wi-Fi (formerly Wayport). When AT&T acquired Wayport they allowed their Wi-Fi enabled smartphones to automatically connect to the "attwifi" hotspots transparently using a technique known as WISPr.

So when I arrived at the Hilton property with my AT&T Captivate it tried to WISPr connect to the "attwifi" access point. It established an 802.11 connection but then I got an icon in the notification bar that said "AT&T Wi-Fi Hotspot / Wi-Fi Hotspot Access Failed." When I clicked on the notification I got a screen that said "Unable to confirm eligibility, please call Customer Care at 800-331-5000." Yeah, like they could help. I was able to connect to the "attwifi" network using my AT&T DSL credentials. 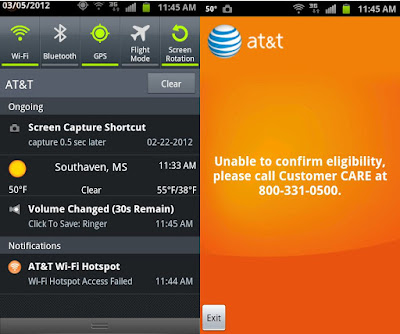 In summary, I got nowhere. When I got home I began to research this on the Internet. I found a couple of issues worth passing on. First a couple of the truly paranoid are experiencing the same problem and have postulated that this is a scheme by AT&T to discourage users who still have the unlimited data plan (I do) into migrating onto the tiered data plans.

Probably more based in reality were several discussions surrounding the issue with AT&T silently connecting their smartphones to their insecure hotspots. The issue is that GSM 3G traffic is lightly encrypted but the 802.11 traffic to the insecure "attwifi" access point won't be encrypted at all. This is especially an issue if you're using POP e-mail that doesn't uss SSL/TLS. A word to the wise should be sufficient.

Lastly was an issue that I plan to exploit! Given that AT&T smartphones use this transparent connection to "attwifi" hotspots, there is a risk of a rogue "attwifi" hotspot hijacking your Wi-Fi session. This probably isn't too much of a risk in Memphis but could be in more dense metropolitan locations or airports.

The way I plan to exploit this is to create a guest SSID on my dd-wrt router named "attwifi." Then all my AT&T smartphone friends and family will automatically connect to my guest SSID without having to explain to them how to connect. Sure I run the risk of somebody driving by and connecting but if they really are driving by they probably won't have time to connect.

I did get a survey from AT&T Wi-Fi asking about how the call went. I responded that they were helpful but my problem didn't get resolved. Incredibly I got a personal e-mail from a manager at AT&T Wi-Fi asking how he could help. This evolved into where I got the direct number to an AT&T Wi-Fi support specialist that actually knows something. He checked back with me every couple of days and let me know what he was doing. He was able to look at the AT&T Wi-Fi logs and discovered that my phone has never connected to the AT&T Wi-Fi network using the WISPr technique. He could see the logins that I had performed using my DSL credentials. What a breath of fresh air to be able to speak with someone who could actually look at the logs.

I had noticed in the Captivate's Wireless Settings that the "Network Notification" was unchecked. This is part of my new phone setup that I had done after the factory reset and Gingerbread upgrade. Just for grins I checked this and headed to my nearest AT&T Mobility store where there was an AT&T Wi-Fi hotspot. It worked! 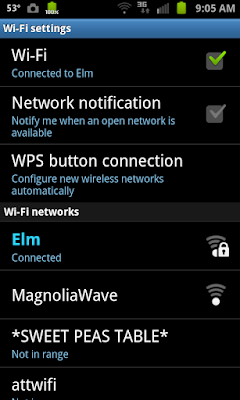 Not to look a gift horse in the mouth but why? Had AT&T Mobility changed something or did the "Network Notification" setting make the difference?

On Friday the AT&T Wi-Fi representative called me back. I like those guys. He discussed potential problems with "forgetting" the "attwifi" SSID and problems that might cause with WISPr. I had probably done that in trying to get connected. I told him what I had done with "Network Notification" and the success I had. He said that his contact at AT&T Mobility hadn't changed anything.

Given what I know, it seems that enabling "Network Notification" and letting the phone discover and connect to "attwifi" enabled the WISPr authentication. The WISPr connect continued to work even after I disabled "Network Notification." That fixed it or AT&T Mobility did something and didn't tell anyone. Nah. They wouldn't do that would they?
Posted by Ben Moore at 9:25:00 AM 2 comments

When Google introduced Google+ they said it offered free photo storage. How they implemented this was to integrate Picasaweb into Google+ and not count photos up to 2048 x 2048 pixels and videos up to 15 minutes. I realize that this isn't sufficient size to use this for backup but Picasaweb has a nice presentation for sharing photos.

So here's my trick. You need a Google+ profile to make this work.

Login to your Google account. This is probably your Gmail account. Go to your Google+ "Photos" page (https://plus.google.com/photos). You may have to join Google+ the first time. 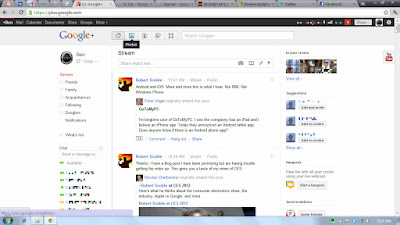 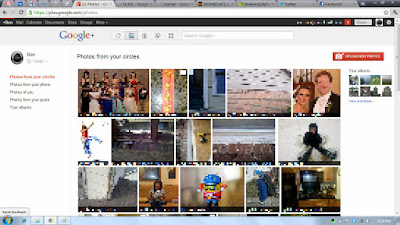 Drag photos or select them from your computer. 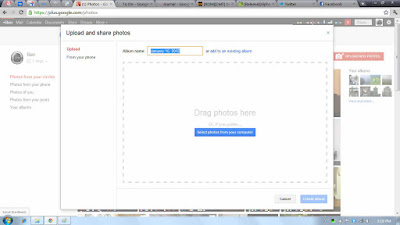 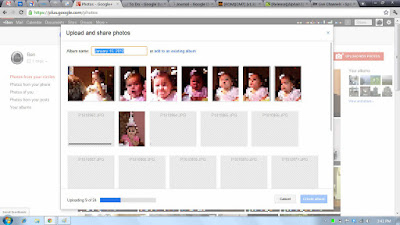 I don't tag people in my Picasaweb albums so I "Cancel" here. 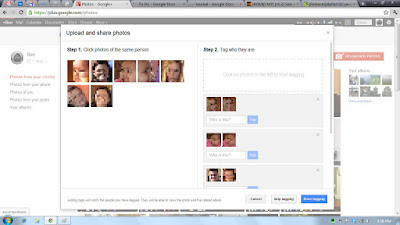 Now here's the fun part. This prompt about sharing is about sharing using Google+. Click on "Cancel" here. You'll get to specify sharing in more detail in a little bit. 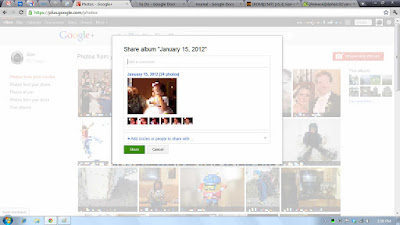 Now browse to "https://picasaweb.google.com/home." Your new album should near the first of the list. 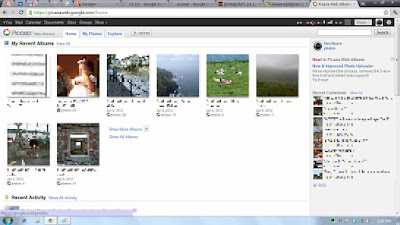 Select it and you'll get the Picasaweb sharing options at the right. Click on the "Only you (edit)" way up near the top right. 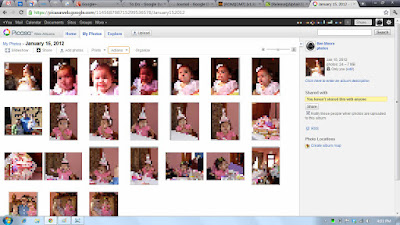 Whew! That's what you want. Down at the bottom is a drop down for "Visibility." That gives you more choices that just Google+. Notice just below this drop down is a check box to show or hide the geolocation data. 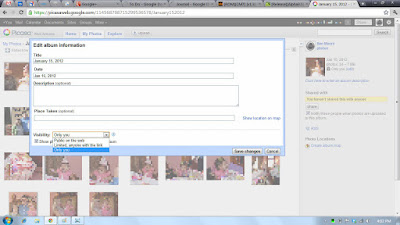 Make your choices and click on "Save changes" and you're done. If you've chosen the "Visibility" of "Limited, anyone with the link" the link is about halfway down the page on the right when you click on "Link to this album." 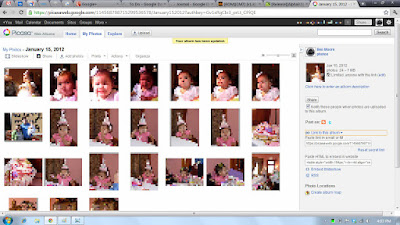 The link will look like "https://picasaweb.google.com/[your Google+ profile]/[album name]?authuser=0&authkey=[authkey]&feat=directlink." I know the following is confusing but when you share this, add "&noredirect=1" at the end. Google moves in mysterious ways. What this does is force the presentation to be in the Picasaweb format rather than the Google+ format. It'll work fine if you don't so don't sweat it.

These photos are resized to 2048 x 2048 or less and don't add to your Picasaweb quota of 1 GB. Unless your originals are smaller than this you shouldn't depend on this process for backup, just for free sharing.
Posted by Ben Moore at 8:27:00 PM 0 comments

Everybody has heard about the Windows 8 Consumer Preview. Like millions of others I downloaded it. I installed it in a VirtualBox virtual machine.

UPDATE: I had done this install on VirtualBox v4.1.8. Recently I upgraded to v4.1.10 and the associated Guest Additions. The Guest Additions killed Windows 8. The problem is described here. I didn't try the recommended solution. I was able to get the Windows 8 recovery dialog up after I reset the virtual machine and restored to a good recovery point.

I've played with it for a week or so and wanted to write this post with a ton of screenshots. But my use of VirtualBox is aggravating this. I run the virtual machine on my "Big Honker." Then I mostly access it via VRDP from my T420s. This really complicates the subtleties of interaction with the target system.

The upside is that Windows 8 has a clever new shortcut. Pressing the Windows key and the PrtSc key at the same time takes a screen shot and puts it in your Pictures library. Clever. The default viewer for the resulting .png file is the Metro Photo app. Interesting.

By the way, the Metro apps in the Preview are just demonstration applications. They all work but aren't full function. Not a problem.

As I was writing this I made some progress in taking screenshots so here's the boot splash screen. 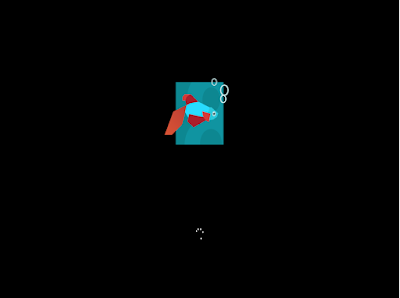 This is the pre-lock screen. 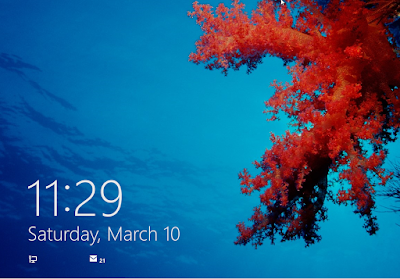 There are no instructions on this screen but if you click and drag toward the top... 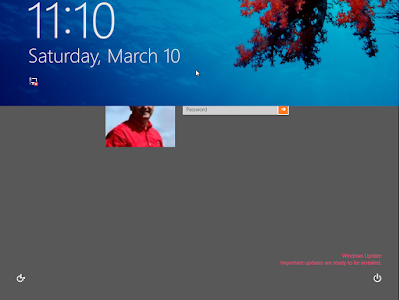 You get the login screen. 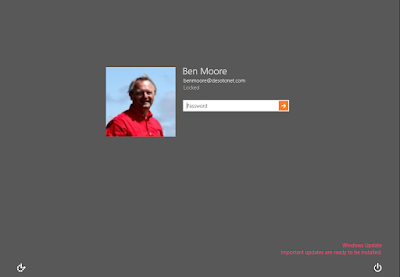 The Metro interface is beautiful and provides an interesting connection back to the traditional (dare I call it "legacy") Desktop. But the transition is "jarring." It would be less so if I could figure out how to use a common background but the Metro will only let you chose from a few colors. 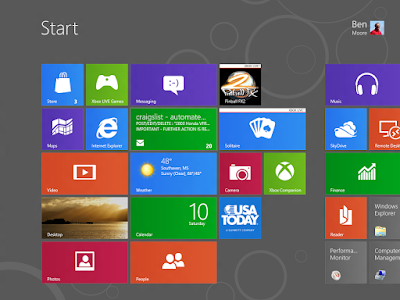 The Windows key toggles you between the Desktop and the Metro interface.

Hovering in the top left corner shows you a thumbnail of the previous app(lication). Carefully sliding your mouse down the left border expands this into a mini Task Manager with thumbnails of other running apps. At the bottom is a thumbnail of the Start screen. Windows + Tab also brings this up. 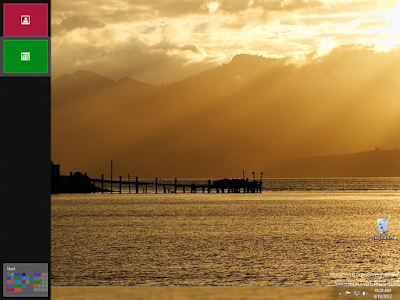 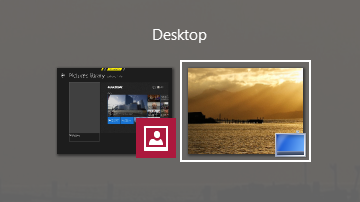 To dismiss a Metro app, click near the top and drag to the bottom reminiscent of webOS! While this doesn't actually close the Metro app, Alt + F4 still works.

Windows + C brings up a "charms" overlay that has "Search," "Share," "Start," "Devices," and "Settings." The "Settings" here are pretty limited.

Obviously there's lots more to Windows 8. Go play with it yourself and discover some.

I also found another post that covers many of the points that I wanted to make and they have screenshots.

Update: In TWiT's Windows Weekly 252, Paul Thurott made a couple of interesting statements:

The very notion of a productivity application is counter to Metro.

You can bitch and moan all you want ... but I've got bad news for you. It's not changing. (about the schizophrenic personality of Windows 8)
Posted by Ben Moore at 11:50:00 AM 0 comments