I have very simple needs (in a browser). I want my browser to:

After this week I need to add 2 more:

Here's how I got here. It starts with the topic of my previous Dancing Pigs post. Following that post I slowly started to move my browsing to Chrome.

While I like Chrome it almost made me add another requirement:

Chrome has an OmniBar. In a nutshell this means that it doesn't have a search bar like Firefox and Internet Explorer. So if you want to search you have to open a new tab and type your search in what I call the address bar. After a while the Ctrl+T to open that new tab became almost natural so I can live with the OmniBar.

Chrome began to grow on me. You see lots of discussion on how fast Chrome is. I never could really tell that Chrome rendered much faster. What I did notice that Chrome is much quicker to navigate around with. The "instant" option of loading the page while you type the URL significantly speeds up my navigation. It can be somewhat disconcerting though.

Chrome had a problem where some of the threads (Windows processes) would exhibit runaway processor usage. Sometimes you could kill off a couple of them and sometimes you had to restart Chrome.

While this was annoying it wasn't nearly as annoying as Firefox's memory leak problems. I have to restart Firefox every day or two as its memory usage will grow to more than a gigabyte. There's even an Add-On for that!

Then after a couple of weeks with Chrome I began to notice that when I sent someone an e-mail and they replied to me including my text that my text had irregular fonts. It made my e-mail look very unprofessional.

At first I just though these were situations where I had copied and pasted foreign text into an e-mail but more research proved this wrong.

I went to Google and found this in the Gmail forum. You'll see that this is a long-standing problem that has been acknowledged by Google.


Just wanted to let you know that we're investigating cases of incorrect formatting when labs are disabled. I don't have an update on a solution right now, but I'll check in next week to let you know if I have any news.

To demonstrate the problem here is a screen capture of what my original e-mail looked like to me: 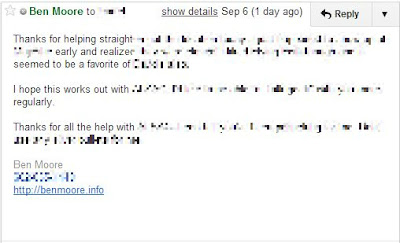 Here's what the recipient saw: 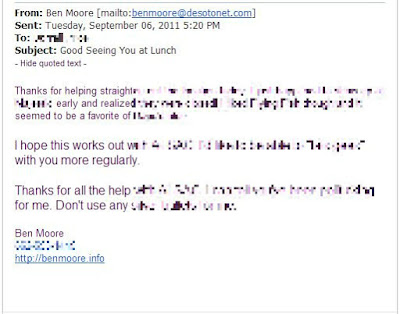 Notice how the point size changed from the first paragraph to the second. This is actually one of the better e-mails. Often the font changed between paragraphs as well, e.g. from Arial to Times.

I simply couldn't tolerate that so I went back to Firefox 3.6.22. It was like putting on an old pair of jeans. Gmail formatting was instantly cured. Whew!

One of the other features of Chrome that I liked was the ability to pin tabs and reduce the space required for persistent pages, e.g. Gmail, Twitter, imo, etc.

Golly gosh Firefox 4+ has this capability! Why don't I just upgrade to Firefox 6? Was my brain absent when I leaped to that conclusion?

Guess what was the first problem I ran into? Firefox Bug 574654. In a nutshell this arbitrary developer removed the beloved about:config capability to specify the minimum and maximum tab width and then created an Add-On that performs something of the same function. Go read the reviews to see the reception. Don't miss the one that points out that this add on doesn't work with the upcoming Firefox 8.

But I'm smart enough to always have a fallback plan. Right? We'll see. I had created a Windows System Restore point before I upgraded to Firefox 6 so I simply fell back to the previous configuration. Unfortunately Firefox seems to cross the line between system and user so when I restarted Windows after the restore Firefox 3.6.22 wouldn't run. I had to undo the restore, uninstall Firefox 6 and reinstall Firefox 3.

I rambled at length in previous posts about my interest in geotagging. In my recent comparison of cameras I even talked about geotagging. In the GPS section of that post I linked to a Picasaweb album that had GPS data from the Lumix.

Yesterday I put the Panasonic Lumix DMC-ZS7 to the test. The results weren't pretty.

We went to the Memphis Zoo and I wanted to use this trip to compare my previous geotagging process with the built-in capabilities of the Lumix.

I enabled GPSLogger on my wife's BlackBerry Curve and set it to log every 30 seconds.

As soon as I arrived I turned on the Lumix and enabled GPS. That was the first mistake.

The Lumix took more than 5 minutes to obtain a GPS location fix. Consequently my first pictures didn't have GPS location in their EXIF data. Then the Lumix began obtaining GPS locations every 5 minutes.

When we returned home I used GeoSetter to compare the GPS locations. 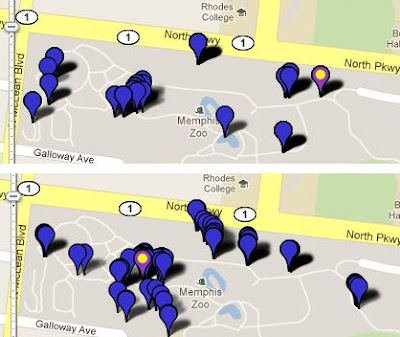 The top set of markers is from the Lumix and the bottom is from GPSLogger.

The first thing to notice is the absence of markers in the Lumix set near the bottom center. This is the entrance to the Zoo and the Lumix hadn't obtained a fix yet. To be fair I have to acknowledge that I started GPSLogger before I left home. The next thing is to notice that the Lumix seems to have fewer markers than the BlackBerry. This is because the Lumix tends to cluster photographs as it only renews its location every 5 minutes. Another thing is the Lumix has one photograph tagged as being in the middle of a small pond. Let's just say that I didn't get wet so this indicates a lack of accuracy on the part of the Lumix's GPS.

The other issue I observed is impact on battery life on each device. With the GPSLogger frequency set to 30 seconds it had no noticeable impact on the BlackBerry Curve's battery. I didn't fully charge the Lumix's battery before I left as it indicated a full battery although it had been used several times on that charge. During the day the Lumix's battery indicator dropped to 2 of 3 and then 1 of 3. When I returned home to offload the photos it began flashing red. I could do a more comprehensive test of the impact of the GPS on the Lumix's battery life but given the ineffectiveness of the Lumix's GPS who cares?

Perhaps I have the bar set unrealistically high. If your interest in geotagging is to tag your photos with which part of a town you are in then the Lumix does fine but carry an extra battery. And if you're lost the Lumix will even show you where you are every 5 minutes. When it obtains a GPS fix it I have it set to show the town and landmark. It kept displaying "Memphis Zoo."

On the other hand GPSLogger and a BlackBerry is a first class method to geotag your photos.

Oh and if you have an Android phone? Don't even bother.
Posted by Ben Moore at 9:19:00 AM 0 comments

My Nook COLOR with Gingerbread is still pretty much the perfect tablet for me. I even shoehorned the Swype Beta on it.

But even with Swype sizable text input is painful. Even e-mail gets tedious.

So I went looking for a physical keyboard that matches the portability of a tablet. I found the Scosche freeKey Bluetooth Wireless Keyboard at Meritline for $29.99 and free shipping (sorry the coupon code has expired). 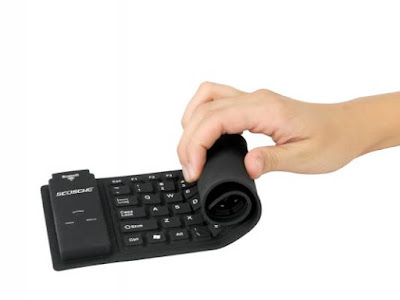 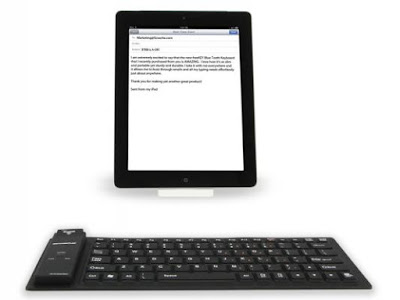 It paired easily with my Nook. Android does a good job of translating the keyboard actions into touchscreen equivalents. The up, down, right, and left arrows move the focus around on the screen and Enter is the same as tapping.

It came with a retractable mini-USB cable to charge it. I wish it used micro-USB like the Nook and TouchPad but I've got tons of micro-USB devices still.
Posted by Ben Moore at 8:56:00 AM 0 comments