I've been using Google Voice since it was Grand Central. Initially I was using it to overcome the confusion that arose with my traveling from office to office. When I'd call someone they'd get the caller ID of the extension that I was using. Then when I'd call them again they wouldn't recognize the extension. Grand Central gave me the ability to always present a consistent caller ID.

Further it lets me keep a good log of calls and even block callers if necessary.

However as I have transitioned to almost exclusive use of a cell phone, originating calls from my Google Voice number is difficult.

I've discovered that the Android Hangouts app handles that nicely. There is also a Hangouts Dialer app but that function has been incorporated into the main Hangouts app.

Here's what you normally see in the Hangouts app. 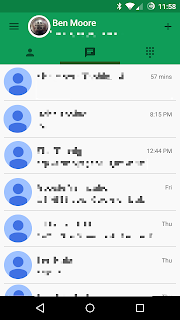 But notice over to the right is an icon for a dial pad. Swipe from the right to the left and you'll get this. 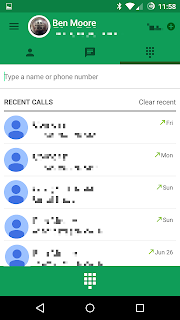 It comes up with Recent Calls from your Google Voice number. Now it's not a pretty as the phone's Dialer app but it works fine.

Just start typing a contact's name and you'll get a list of matches. 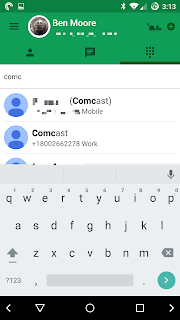 Or from the Recent Calls screen tap on the dial pad icon at the bottom. 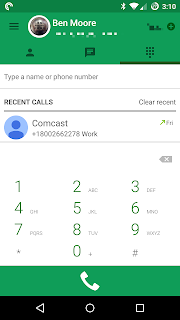 The call will be placed over cellular data or Wi-Fi and present the caller ID of your Google Voice number. 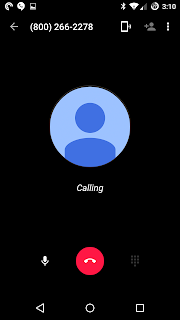 Now if you want to really get out there, you can go to Hangouts / Settings and turn on "Ring Hangouts for incoming phone calls made to your Google Voice number". 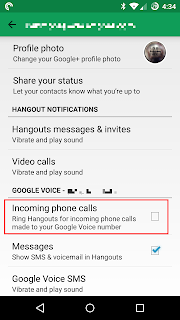 Now you're not using any cellular minutes. And if you have persistent Wi-Fi you don't even need cellular service.

On a recent trip to the Gulf Coast we were driving through a heavy rain. I got an unusual alert tone on my OnePlus One. It was Google Now with the following alert. 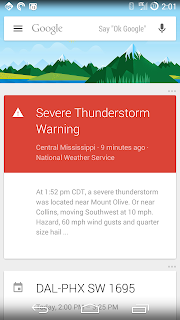 And it really was a severe thunderstorm because soon I got another similar alert. 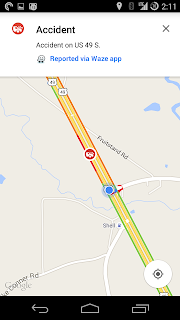 As we approached the location the information got more complete. 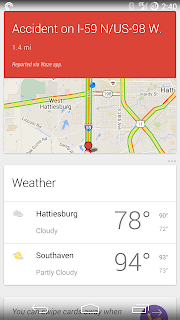 This accident was reported by a Waze user. 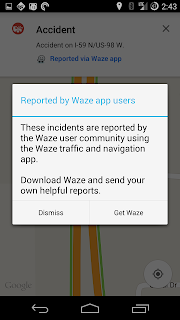 By now I was fascinated with the Google Now cards that were being presented to me. As I scrolled down I saw this one. 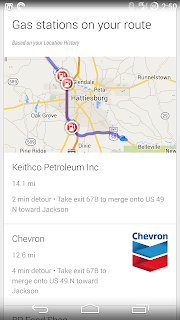 All this was completely passive on my part. I was not using Google to navigate nor had I searched for gas stations.

On Mondays, I visit my mother and take her to my brother's house. Here are the Google Now cards I had on a recent Monday morning. 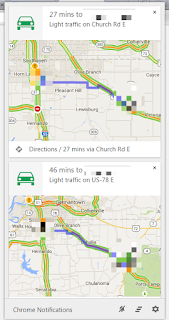 Later that day Google Now reminded me of my frequent dinner destination on Mondays. 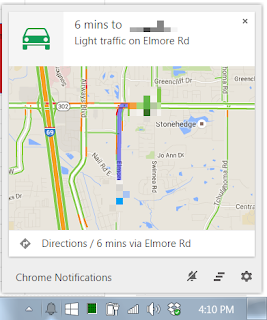 Some may call this creepy. I call it pretty useful.
Posted by Ben Moore at 8:05:00 PM 0 comments

Cell phone GPS capability has gotten so much better since I struggled with my Samsung Captivate.

I captured this screenshot on my OnePlus One as we were driving on the Interstate. I was impressed with the quick GPS fix and the accuracy. 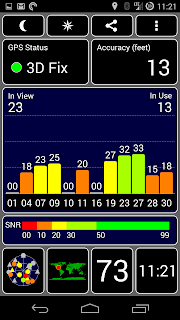 Then I installed Cyanogen OS 12 and things changed.

The next morning when I went out for a walk Runkeeper didn't get a GPS fix. Well, I had just updated Runkeeper the evening before. So off I went without a GPS fix. When I returned I discovered that while I was walking Runkeeper had gotten a GPS fix. Yeah, something wrong with Runkeeper.

The second morning Runkeeper didn't get a fix again so I fired up GPS Test. No fix. Can't blame Runkeeper for that.

I stood in my driveway for 5 minutes or so and finally got a GPS fix and took my walk. When I returned I headed to Google.

What I found was that elongated times to get a GPS fix were particularly common after upgrading fom Cyanogen OS 11 (KitKat 4.4.4) to Cyanogen OS 12 (Lollipop 5.0.2).

There are all kinds of mystical fixes out there but the one that seemed to make the most sense to me was to reset the AGPS data.

It turns out that GPS Test has Clear AGPS and Update AGPS functions hidden in its menus. Tap "..." at the top right. 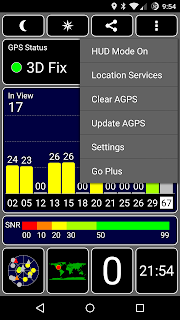 A couple of taps later and my problem was gone.

In the following screencast you can see that the GPS gets a fix in the 6-7 seconds that it took Runkeeper to paint the screen.

I've been playing with Windows 10 through the Insider program since it started.

I ran Windows 10 Technical Preview in a VirtualBox virtual machine. While Windows 10 always ran well, the installation and upgrade process wasn't smooth. I believe that was due principally to the virtual environment.

I have an old ThinkPad T61 that was still running XP. All I did with it was run iTunes offline. That seemed like a perfect opportunity to load Windows 10 on. It had 2GB of RAM and a 60GB hard drive. It was a  Intel Core2 Duo T9300 64-bit.

I had a copy of Windows 10 Enterprise so why not?

I deleted the XP partition and redefined it and did a clean install of Windows 10.

It was an absolutely flawless install. Everything worked the first time.

There have been a couple of things I've fiddled with. The wireless adapter doesn't always reconnect after restarting. I haven't searched to see if there's a better driver for it. The TrackPad center button doesn't scroll on Metro Modern Universal apps. Unfortunately that includes the new Settings dialogs.

I fought with the desktop theme. I prefer to use a desktop image with a white background. Windows 10 insisted on using a white font for the desktop icons with a black drop shadow. If I turned off the drop shadow, the icon text simply disappeared. In a minute I'll get to the solution.

With that under my belt I moved on to a Windows 7 instance on a ThinkPad X220.

The X220 was running Windows 7 Pro 64-bit and was eligible for a free upgrade. I followed these instructions and forced the upgrade in place.

From start to finish the procedure took just under 3 hours. Again it was an absolutely flawless install. Everything worked the first time.

I haven't had any problem with the wireless adapter and the TrackPad center button works like it should. I had already hacked around with the desktop icons to get them looking like I wanted them under Windows 7 and they stayed "fixed." The X220 had Office 2013 installed and after a brief "installation" dialog all the Office apps worked fine and retained all the settings. Even little things like power settings stayed intact. Oddly all the printers went away but were easy to reinstall. And Windows 10 has its own "Print to PDF" service. Microsoft Security Essentials quietly disappeared.

Back to the T61 desktop. I exported the desktop theme from the X220 and installed it on the T61. Then again turned off the drop shadows. After logging off and back on the desktop was fine. I've tried everything with the TrackPad driver. The driver dialog doesn't have the "ThinkPad" tab like on the X220. I even tried reinstalling the driver in Windows 8.1 compatibility mode. I used Device Manager to uninstall the device and let Windows reinstall it. No luck.

So far I've stuck with the new Windows 10 Start menu. I don't like it but I think it'll be Ok. It's taken both systems a while to successfully build the index and search right.

Overall, I couldn't be more pleased. My "Big Honker" server offered to install Windows 10 Pro today and I declined for the time being. That system has a couple of applications that, although cleared by the compatibility checker, I'm concerned about, e.g. Picasa, Tivoli Continuous Data Protection, and a USB scanner. That system is 5+ years old and I wish it had USB 3. It may be simpler to just replace it.
Posted by Ben Moore at 7:34:00 PM 0 comments

With the recent announcement of the OnePlus 2 which doesn't have NFC (Near Field Communication) I felt like I needed to revisit NFC and Android Beam.

I've written about this technology previously and described the use cases but with all the grumbling about the lack of NFC on the OnePlus 2 I wanted to actually demonstrate how NFC and Android Beam work.

To turn on NFC and Android Beam go to "Settings". In the "Wireless and networks" section, tap on "More". Tap on "NFC" to enable it. 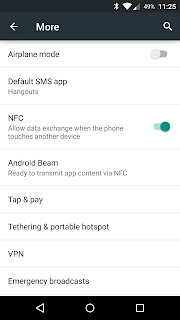 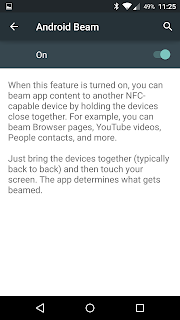 Here's how it actually works.

Android Pay, successor to Google Wallet, also uses NFC. Here's my post on Google Wallet. It was written before the announcement of the iPhone 6 with Apple Pay. The proliferation of NFC ready cashier terminals has accelerated with refresh of terminals due to the upcoming EMV transition.