Decrapification of the PRIV

From the Urban Dictionary:


decrapification - The act of removing all the pre-installed crap from your Dell or HP computer PRIV smartphone.

Other than the one time problem I had with Carrier IQ I really never had a problem with the AT&T bloatware on the BlackBerry PRIV.

In late summer 2016 many PRIVs started experiencing "No Service" when using LTE. There was some speculation that the problem was related to changes AT&T made in their LTE network to support the iPhone 7 running a new radio chip. In early November BlackBerry released an apk that corrected the "No Service" situation.

But that was just the tip of the iceberg.

It seems that AT&T has pretty much walked away from the PRIV. Obviously they dumped a large portion of their PRIV inventory onto liquidators as I bought mine for $300 with a carrier unlock code taped to the unsealed AT&T box.

A couple of days after BlackBerry released the "No Service" apk they rolled out a 1.8GB (not a typo) Over the Air (OTA) update to remove all the AT&T software from the now orphaned AT&T BlackBerry PRIVs. 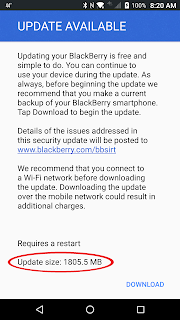 Just for icing on the cake, this OTA included the Android November security updates. 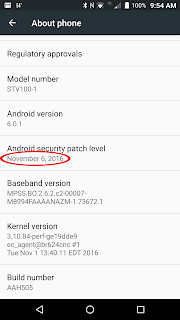 The AT&T boot animation (including music) is gone and the software updates now come from BlackBerry, not AT&T. 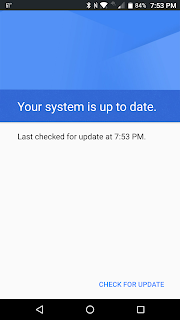 Maybe it should be called the Nexus PRIV.

You really have to give some props to BlackBerry for this.
Posted by Ben Moore at 7:50:00 PM 0 comments

Windows 10 is the Last Version of Windows - NOT

Do you remember Microsoft's statement about Windows 10?


"Right now we’re releasing Windows 10, and because Windows 10 is the last version of Windows, we’re all still working on Windows 10." Jerry Nixon, Microsoft
Source: The Verge

As of the end of 2016 there have been 3 "versions" of Windows 10. Here are 2 pages from Microsoft that call out the "versions." 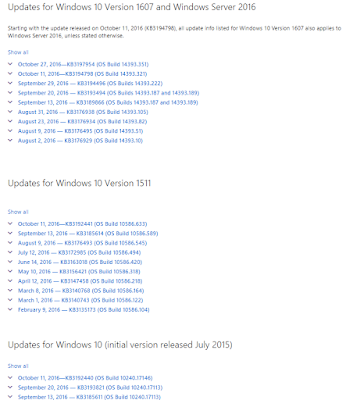 But here's the issue with this relatively rapid push of Windows "versions."

Each of these "versions" (1507, 1511, 1607) are the process equivalent of a Windows upgrade. Each time you get one of these pushed via Windows Update your system goes through a Windows upgrade process similar to going from Windows 7 to Windows 8.

While the process is greatly streamlined from the Windows 7 to Windows 8 upgrade, the system still suffers all the trauma of a Windows upgrade.

I have been pleased up until the Anniversary Update (1607). Early on with 1607 I heard rumblings of problems with the upgrade. One of the problems had to do with systems booting from SSDs so since I am running Windows 10 Professional I was able to defer the upgrade.

After things quieted down I decided to let Trump upgrade. The process took about an hour and had every appearance of going perfectly.

After the upgrade I played around for a few minutes and everything seemed to be working so I turned in for the night. In the morning I went back in to check it and the screen wouldn't come back on. The system unit's power light was on but it wouldn't wake up for a tap of the power button. It took a hard reboot to get it back working.

Again everything seemed to be working so I walked away. When I came back in a little while it was locked up again. I started problem determination and finally associated the lockup with the power plan turning off the display. I set the time to "never" and it stayed up all night.

Then I remembered that a day or two before the upgrade AMD updated the video drivers for the Radeon V7 240. I went to the Start menu and typed "AMD". There was an entry there for AMD's utility but when I clicked on it it was missing.

The Anniversary Update had SILENTLY REMOVED the necessary drivers and the utility that I had installed to maintain them. I went back to the AMD site and download and reinstalled the proper drivers.

Why did Anniversary Update do that and break my system? What if I had been a "normal" user and didn't have the problem determination/resolution skills that I have?

That was the first problem.

Then I went back to my day to day laptop. I had a file that I needed to save on the D: drive of Trump. I was prompted for a userid/password.

I hadn't had to do that before the Anniversary Update. So off I went to do problem determination on this problem.

It turns out that you now have to turn off password protected sharing.

Neither of these are real show stoppers but if Microsoft is going to churn Windows versions twice a year they have GOT to overcome these types of problems.

I always share the data drive of my "server" with the house. My goal is to make it painless, i.e. no passwords.

Every time I rebuild the server (or upgrade Windows, e.g. Anniversary Update) I have to remember what to do.

Android 5.0 Lollipop introduced a new Smart Lock feature. Smart Lock allows you to declare specific situations where you want your phone to be unlocked.

I use this feature and find myself only having to enter my PIN 1-2 times per day.

Here's how to do it.

I use "Trusted devices," "Trusted places" and "On-body detection."

Overnight, specifically after 4 hours idle, the phone locks regardless of trusted situations.

As always there are 2 sides to this story. Here's the other.

Remember what the president of our company said "iPhone users just don't understand what they're missing."
Posted by Ben Moore at 8:07:00 PM 0 comments