I wrote about how I had forced the upgrade to Windows 10 21H1 in a previous post. I did it the hard way and suffered the consequences. That post described the cleanup I had to do.
Well, I came across another laptop that hadn't/wouldn't upgrade to 21H1. I didn't want to take the hard way again.
If a PC automatically offers 21H1, the installation is QUICK. So I set out to find how to force that laptop to upgrade in the same manner as if it were automatically offered.
And I found it.
It seems that 21H1's functions were actually delivered in previous months cumulative updates. The "Feature Upgrade" that is automatically offered just flips some registry switches and reboots.
That "Feature Upgrade" is simply KB5000736, an enablement package. This enablement package is only available for devices running versions 20H2 and 2004.
If you have a device that isn't offering 21H1, just download KB5000736 (64-bit) and run it. Incidentally, when I clicked on that link, nothing happened. I had to right click and choose "Copy link address" and then paste that link into another browser tab.

https://commons.wikimedia.org/wiki/File:Ic-photo-Intel--D8086--%288086-CPU%29.png
Here's an article on its history.
I worked in IT during those 40 years and have a few thoughts.
In the 1990s, there were several competing architectures in the enterprise realm. I especially recall DEC's Alpha and Sun's SPARC. The less said about IBM's PowerPC the better. It took me some Googling to even remember what HP's processor was. And nobody remembers Intel's Itanium. HP went all in on Itanium and look where that got them.
But these architectures locked an organization into a specific vendor. We went through a huge and expensive migration of our SAP systems from PowerPC to SPARC.
During that effort, my architect and I pushed the vendors to propose a mixed environment, i.e. proprietary processors for database servers and commodity processors (x86) for application servers.
None of the vendors would play. We ended up going with SPARC, but in the end, the battle was lost to Intel's x86 architecture.
Ironically, this success wasn't attributable to Intel but AMD.
One of the advantages that SPARC brought us was the ability to move to 64-bit architecture for our database servers. That made orders of magnitude improvements in our I/O response times.
At that time, Intel didn't support 64-bit on x86.
AMD came along and implemented a 64-bit architecture on top of Intel's x86 code. That is known as x64 and has conquered the world.
Intel played catch-up and eventually implemented x64 and, as they say, "The rest is history."
But the fat lady hasn't sung yet.
Posted by Ben Moore at 7:57:00 PM 0 comments

Exchange in the Tank

This article came up in my feed recently:

This noted that the Microsoft Exchange admin portal was down after Microsoft forgot to renew the SSL certificate for the website. 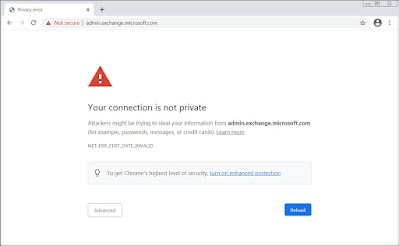 That sounded familiar to me so I went back and searched my blog.
Bingo!

Teams in the Tank

In that case Microsoft tweeted:

We've determined that an authentication certificate has expired causing users to have issues using the service.

It's déjà vu all over again.

Maybe they should have put a reminder on their Outlook calendar.

I know I'm not your normal user. I try things so you don't have to.
Recently I forced the installation of Windows 10 21H1 on my ThinkPad. To do this, I downloaded the Windows Update Assistant and ran it.
Don't try this at home.
Unlike the upgrade from the Windows Update app, this process does a FULL Windows 10 update.
But it all went well. It took a long time unlike using the Windows Update app but worked fine.
Then a week later, I was poking around in my C: drive. (You do this, don't you?)
I found several folders that I wasn't expecting: 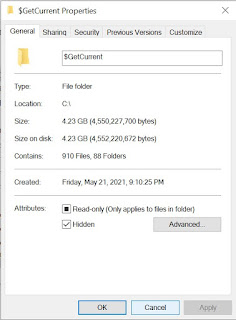 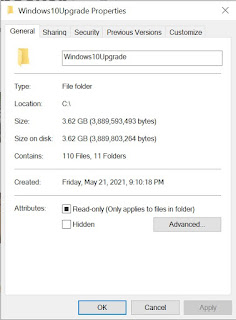 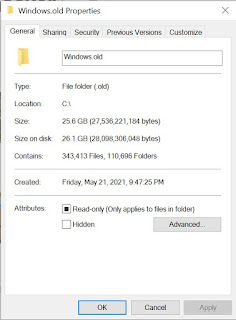 Those weren't really a problem on my HD but still that's over 33GB of space.

Surely Windows 10 would clean those up. Some of them are supposed to be cleaned up 30 10 days after the upgrade. That period had not lapsed.
Windows 10 has a Storage Sense feature that has an option to "Delete previous versions of Windows". 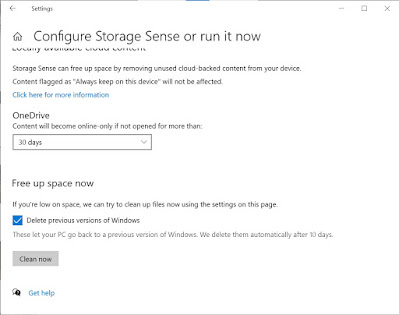 I ran that and it reported that it cleaned up 17.4 GB by deleting Windows.old. That's a nice start.
Now you ask why did it only clean up 17.4 GB if Windows File Explorer said that Windows.old was 25.6 GB? Read this until your head hurts.
Windows 10 Forums said that uninstalling the Windows Update Assistant will delete the Windows10Upgrade folder. I uninstalled the Windows Update Assistant and the Windows10Upgrade folder was gone.
How-To Geek said that the $GetCurrent folder can be deleted but should be deleted automatically. After 10 days, its size was only 181 KB.
Posted by Ben Moore at 7:25:00 PM 0 comments