Following along on my recent post on ShakeCall I couldn't quite put my finger on what I didn't like about the Captivate's dialer application.

While browsing the appbrain's "Hot this week" I came across an alternative dialer app. In reading the comments there was quiet an outcry about the need to allow Internet access. Presumably this is for ads pulled from the Internet. In these comments was a reference to Dailer2.

It was a quick download and install and it works great.

Again I didn't tweak the settings much. 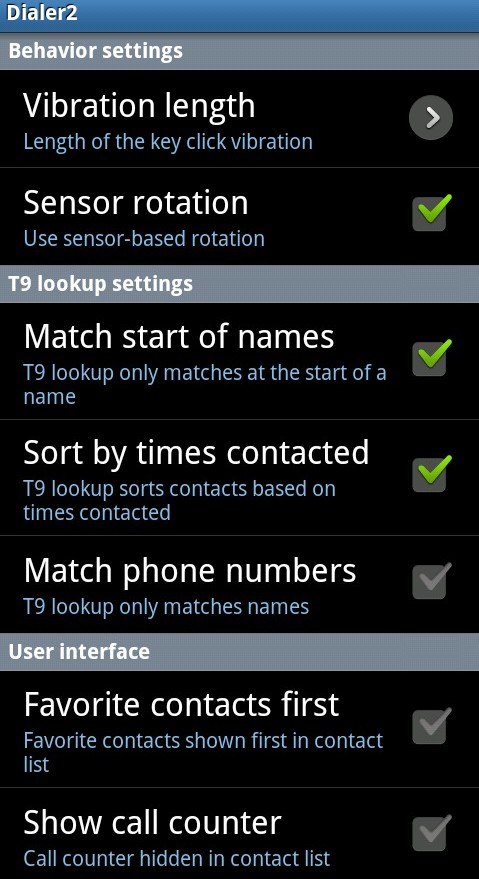 I replaced the dialer application in the tray with Dialer2.

When you launch it, you get a much cleaner and simpler dial pad. 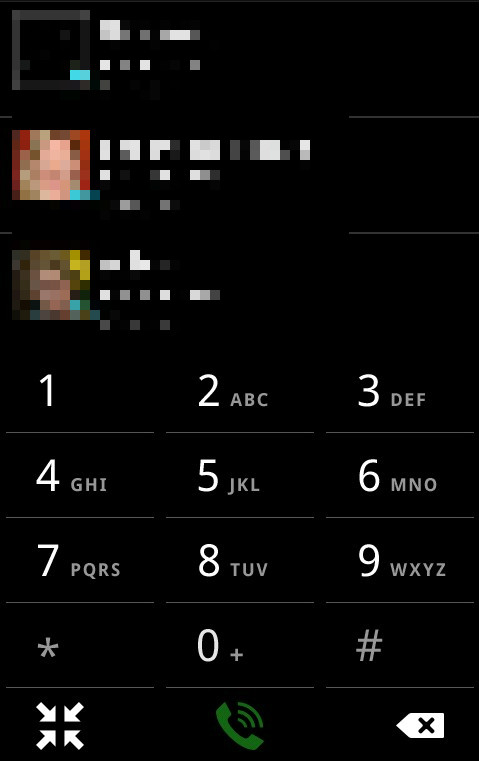 The most recent contacts show up in a scrolling list on the screen.

You can tap and hold on a contact to get a list of all their contact methods and tap on the number you want to call. 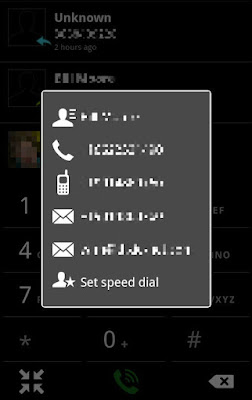 After learning how good a computer my Captivate is and what it lacks as a phone I am getting along very well with the Captivate. I still keep an eye out for tools that improve the phone experience.

As most of you know, answering a call on an Android requires swiping across the screen. Unless you have the digital dexterity of Houdini this takes two hands.

Tha app ShakeCall brings this back to one hand. To answer you simply shake the phone.

There are lots of settings but I didn't tweak them much. You can also shake to hang-up a call but I turned that off.

I'm a long-term Globat customer. My hosting account came up for renewal this month. My last contract was for $3.75 per month for 36 months. When I called Sales on 6/13/11 and spoke to Amy the best rate she offered was $7.95 per month.

Then I had the following conversation via your online chat:


info: Thank you for contacting support. We are currently experiencing an issue with our email servers. Our Network Operations team is currently working on fixing it in order to restore email services as quickly as possible. We apologize for the inconvenience and appreciate your patience while we fix the issue. Please hold for the next available operator to respond.
info: You are now chatting with 'Matt Benson'
Matt Benson: Hi, how are you today?
Ben Moore: my domain (desotonet.com) it is up for renewal. My last contract was for $3.95 per month for 36 months. When I called Sales today and spoke to Amy the best rate she offered was $7.95 per month.
Matt Benson: Yes, that will be $95.40/yr.
Ben Moore: That's more than twice what I paid on my last renewal.
Matt Benson: Last year you have signed up with promotional offer. This offer is available only for the new sign-ups and is not applicable for the existing customers.
Matt Benson: Also, the offer price is valid only for the first term and it will be
changed to the regular price from the next term onwards.
Ben Moore: So you're basically running me off?
Ben Moore: That wasn't my first term with Globat.
Matt Benson: Okay.
Matt Benson: But, now we do not provide promotional offer for renewal.
Ben Moore: There's an offer out there for GX01 for $3.75. Is that available to me?
Matt Benson: That is promotional offer. This offer is available only for the new sign-ups and is not applicable for the existing customers.
Ben Moore: Good bye.
Matt Benson: Thank you for chatting with us. Please feel free to contact us at any time. We are available 24x7.
Matt Benson: Bye!
info: Chat session has been terminated by the site operator.
From these 2 interactions I have come to the conclusion that Globat no longer wants my hosting business.

I would like to renew my hosting with Globat at the same or lower rate than I have been paying. Can you arrange this for me?
Posted by Ben Moore at 5:02:00 PM 0 comments

I'm a voracious podcast listener in the car.

The Android Music Player left several things to be desired. 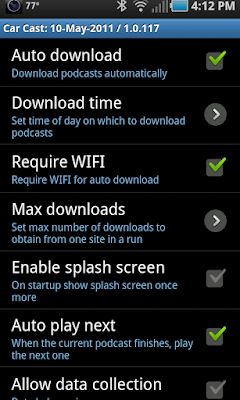 The Subscriptions screen allows you to enter your podcast feeds. After you enter them you can even test the url. 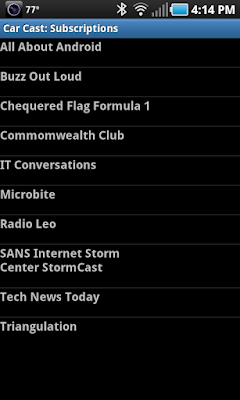 The Podcast screen shows your list of podcasts and lets you select a set of podcasts to delete. Car Cast will even highlight the ones you've already listened to and let you delete them with one click. From this screen you can also select which podcast you want to listen to by single clicking it. 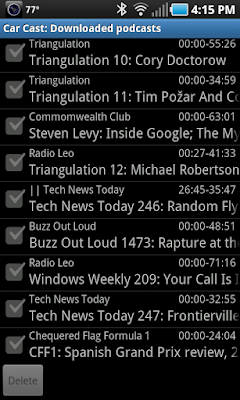 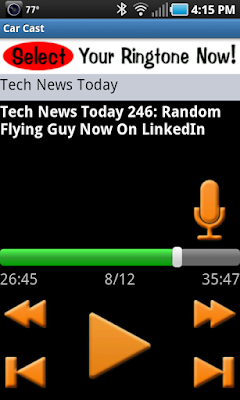 The << and >> buttons jump 30 seconds backwards or forward. The |< and >| buttons skip backwards and forwards through podcasts. You can even drag the marker along the time line.

The microphone button will let you make quick audio notes while you're driving.

There's also a paid version that lags a little behind the free version to improve stability.
Posted by Ben Moore at 4:06:00 PM 2 comments

One of the blogs I follow had an article recently that discussed how to turn the Nook Color into a complete tablet. It discusses installing Cyanogen's Android 2.3 "Gingerbread" on a microSD card and basically dual-booting the Nook Color. It sounds harder than it is.

I had rooted my Nook and am very happy with it but it still had some rough edges. The Nook doesn't present the expected function keys of other Android devices, i.e. Home, Back, Search, Menu. The root process installs an application to present these as floating hot spots but that just isn't the same.

I squirreled the Between the Lines article away and ordered me a 8GB Class 10 microSD card. That was a mistake. I'll explain in a minute.

When the microSD card came in, I started following the post referenced in the blog article. While this was running (Remember the 8GB Class 10 microSD card? I'm getting close to explaining.) I came across another post. This androidtablets.net post describes a way to consolidate some of the steps in the xda-developers.com post.

Unfortunately I didn't read the xda-developers.com post closely enough before I ordered the microSD card. I like their summary: "buy Sandisk-branded class 4 microSD cards." Amen.

That's why I had time to go surf around while the install was running. The xda-developers.com post links to another post with a table of benchmark results. Some of the Class 10 cards are 100 times slower than Sandisk Class 4 cards in a area that is key to the Nook Color performance.

Although the install process worked it took about an hour. I wasn't sure how long it was supposed to take but when it was done, the Nook Color functioned but it was sooooo slow.

That's when I read the discussion on using a Sandisk Class 4 microSD card. I headed out to my local OfficeDepot and bought this.

When I started over, I used the process in the androidtablets.net post. The consolidation of steps and the new microSD card brought the install down to around 20 minutes!

Wow is all I can say. The resulting Nook is awesome. Gingerbread is wonderful. Now the function keys are in the Android status bar. The Cyanogen guys even have Bluetooth working.

I think captchas have gone too far.

Yesterday I had some kind of error on my Captivate and it presented me a captcha. After I failed the first one I began screen capturing the challenge and my responses.

Here are those screen captures in a random order. Let's see who can pick the one that is correct. Now remember that these were presented on a 4 inch screen in bright sunlight. 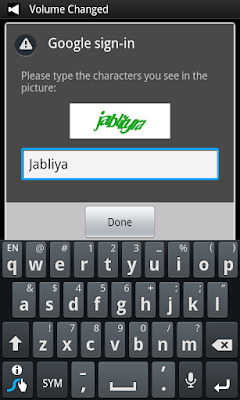 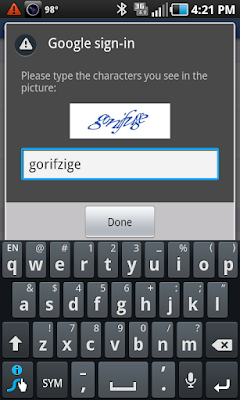 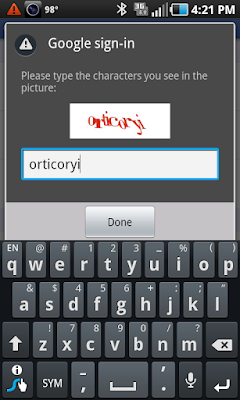