There Was a Problem

I continue coming up to speed on Windows 10. Overall it is still going well. There are just bumps in the road here and there.

I'm working toward upgrading my wife's ThinkPad T420s. I want it to go smoothly (which I fully expect) and quickly (the subject of this post).

To make it go quickly my idea was to have the latest Windows 10 bits downloaded. To do this I ran the Windows 10 Media Creation Tool.

I had used the Media Creation Tool before. But this time it was different.

I tried it on a new PC. One where I had taken my own advice and made the default user NOT an administrator.

The tool downloaded successfully and ran through its first couple of screens asking for the administrator's password. I'm not sure why it needs administrator rights but anyway...

Then I gave it access to the USB drive I wanted to use for my fresh media.


There was a problem running this tool. We're not sure what happened, but we're unable to run this tool on your PC. If you continue experiencing problems, reference the error code when contacting customer support. Error code: 0x800704DD - 0x90016. 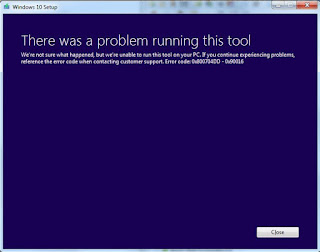 So I started searching Google for this and came across this.

The net of this is that to create a USB drive you have to run the Media Creation Tool while logged in as an administrator.

So Google Photos has free unlimited storage. Not. That's a whole another discussion. This post is to cover what to do when you discover that you are using too much of your free 15GB of Google storage for photos.

Here's where to look for the problem. 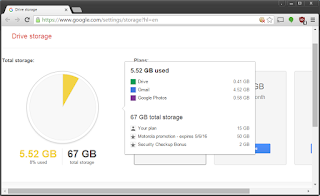 Now I'm not really having a problem but my daughter did.

I believe there's an underlying problem with Google wrongly counting older photos against your storage even if they are under the 16 megapixel size.

This post from the Nexus 5 subreddit gave me the solution.

WARNING: The following procedure will resample your full resolution photos down to 16 megapixels. 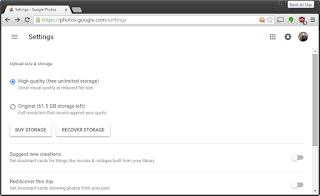 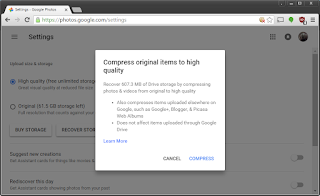 If you've been following my TiVo migration you probably noticed that I had a lot of equipment that I took out of service: 2 TiVo Premieres, a Western Digital 1TB My Book AV DVR Expander, and a Linksys WES610N.

Let's just say I was inspired.

In the end I sold the 2 TiVo Premieres upgraded to lifetime service, the Western Digital 1TB My Book AV DVR Expander, and a Linksys WES610N (new in the box) and netted over $500 after all charges and fees.

This improves the business case on my Roamio upgrade to being in the black from the start with a long term savings of more than $37/month ($50/month for the the first year). And I doubled my recording capacity and added TiVo capability in the kitchen.

I didn't mean to start down this road but it just happened.

The TiVo Mini in the bedroom worked so well that I wanted to put one in the kitchen. I had been using a Comcast Digital Transport Adapter (SD only and no premium channels) and they were going up to $4 per month. I found Amazon had TiVo Minis on sale and bought a second one for the kitchen. By the way, the sale price was less than what I had paid for the first one so Amazon gave me a credit for the difference. Nice!

But wait, I don't have Ethernet in the kitchen. I thought about using a Linksys WES610N like I was using in the bedroom but that requires more wires.

Then I noticed that the Minis supported MoCA. And the TiVo Roamio functions as a bridge between Ethernet and MoCA.

I configured the Roamio to support MoCA and put a MoCA Point of Entry Filter in front of the Comcast amplifier/splitter.

It worked so well in the kitchen that I converted the bedroom to MoCA and retired the Linksys WES610N. 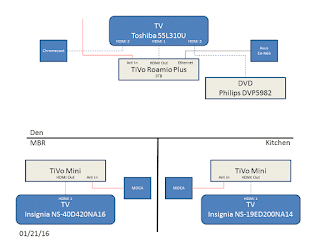