If you're not using Adblock Plus, you should be.

Here's what a Google search looks like without Adblock Plus: 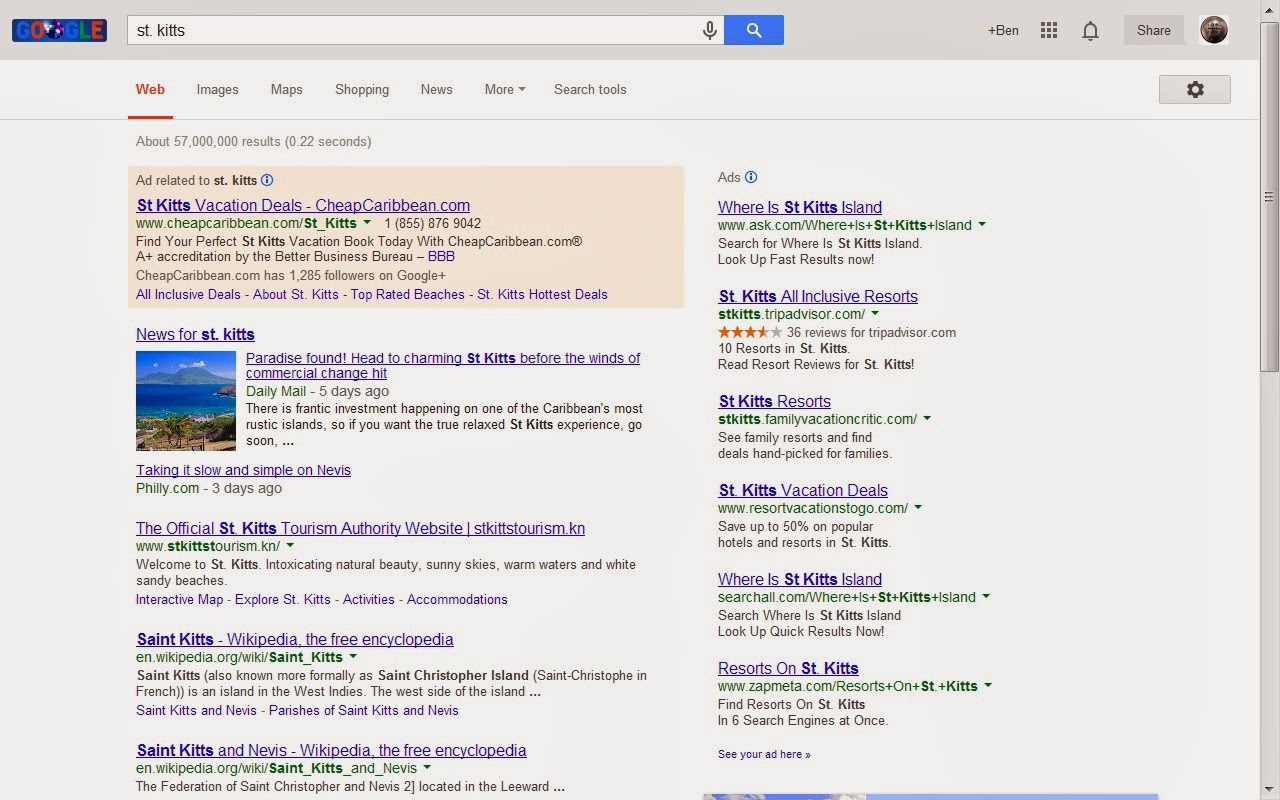 And the same search with Adblock Plus: 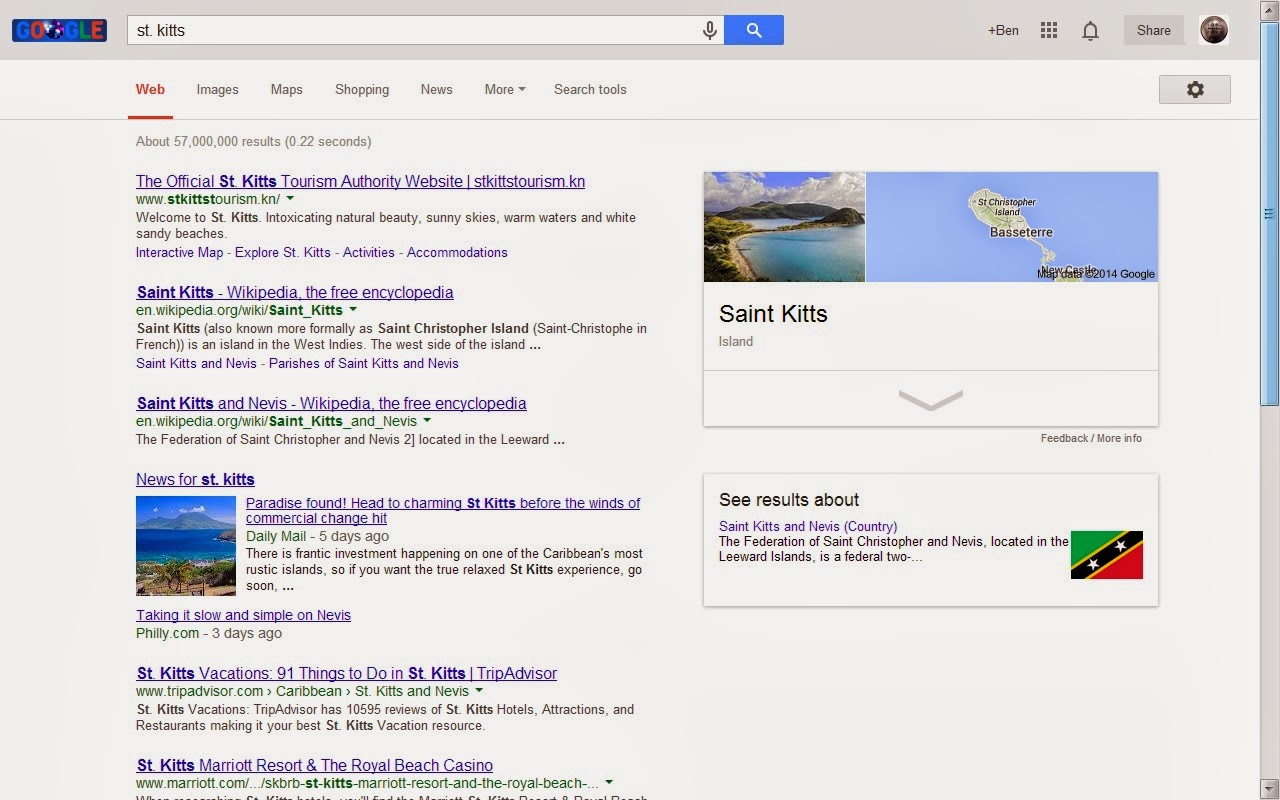 Now that you are using Adblock Plus, go here and add "Disable Tracking" and "Disable Malware Domains" features.

I also include "EasyList" from here and "Block all Facebook annoyances" from here. 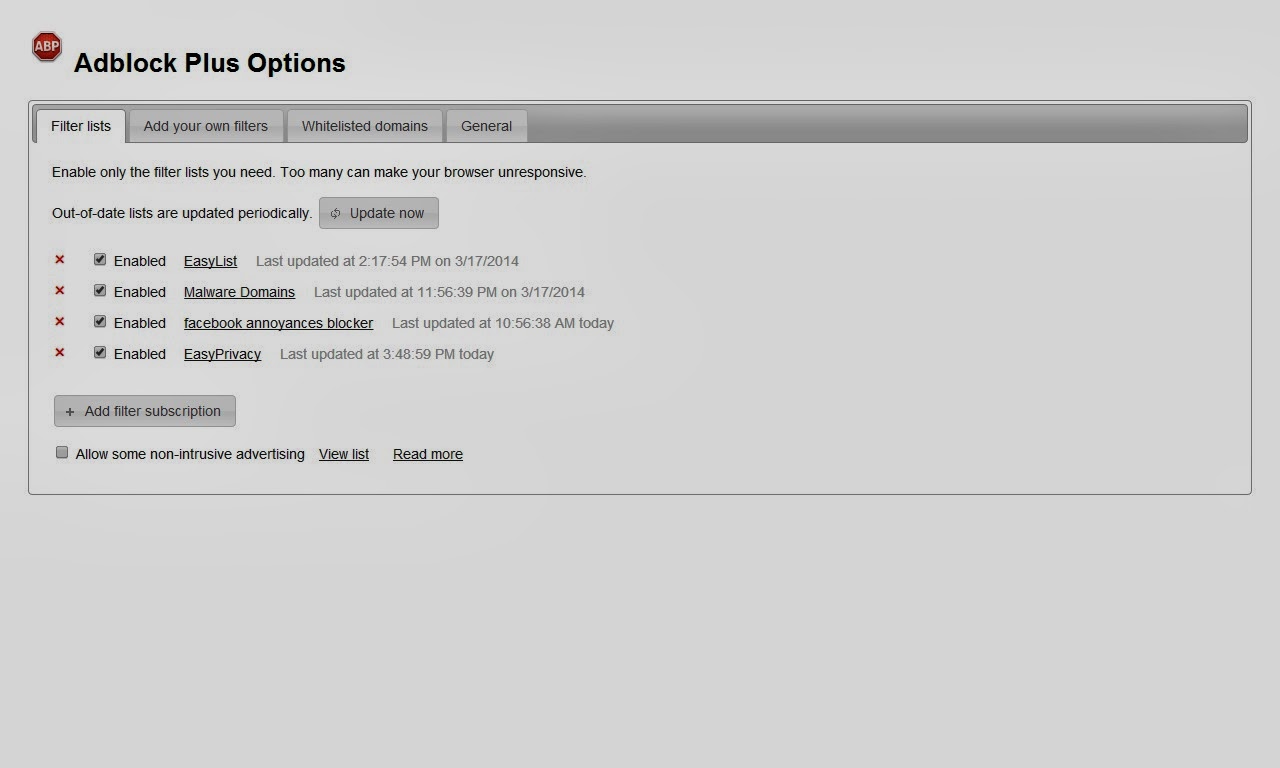 I'm a big user of various cloud services. As I mentioned in that post my wife and I were using a text file in Dropbox for grocery lists. That turned out to be painful as you had to tap in just the right place to put a cursor in a line so you could mark that you had gotten that item. I know it seems trivial but it was a nuisance and the WAF was low. Remember that I have my private domain hosted by Google Apps.

For my own "to do" lists, I've been using Google Tasks. There are interfaces to Tasks both from the Gmail page and the Calendar page. On Android I use Tasks. On iOS I use Go Tasks. They both work seamlessly with Google Tasks.

So I wondered if I could use Google Tasks for a grocery list. The presentaton is a natural list with a check-off box. Just what I needed.

But Google Tasks are specific to a single user. They aren't shareable. So began the quest.

First I found this blog post with a description of how to create your own Google App to share. It worked but the presentation was a unique web page and didn't seem to be readily presented on a mobile device.

Then I found I Sync Tasks. It simply just does what you want it to do. 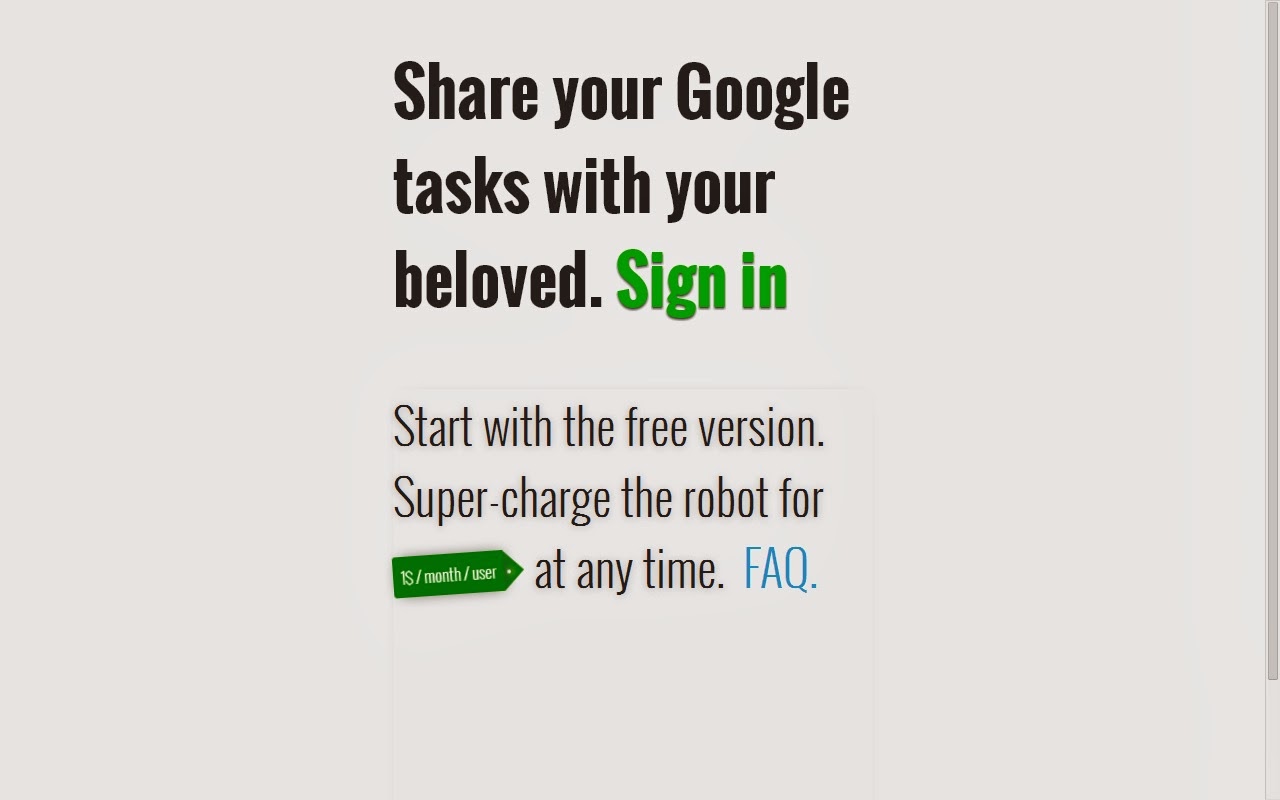 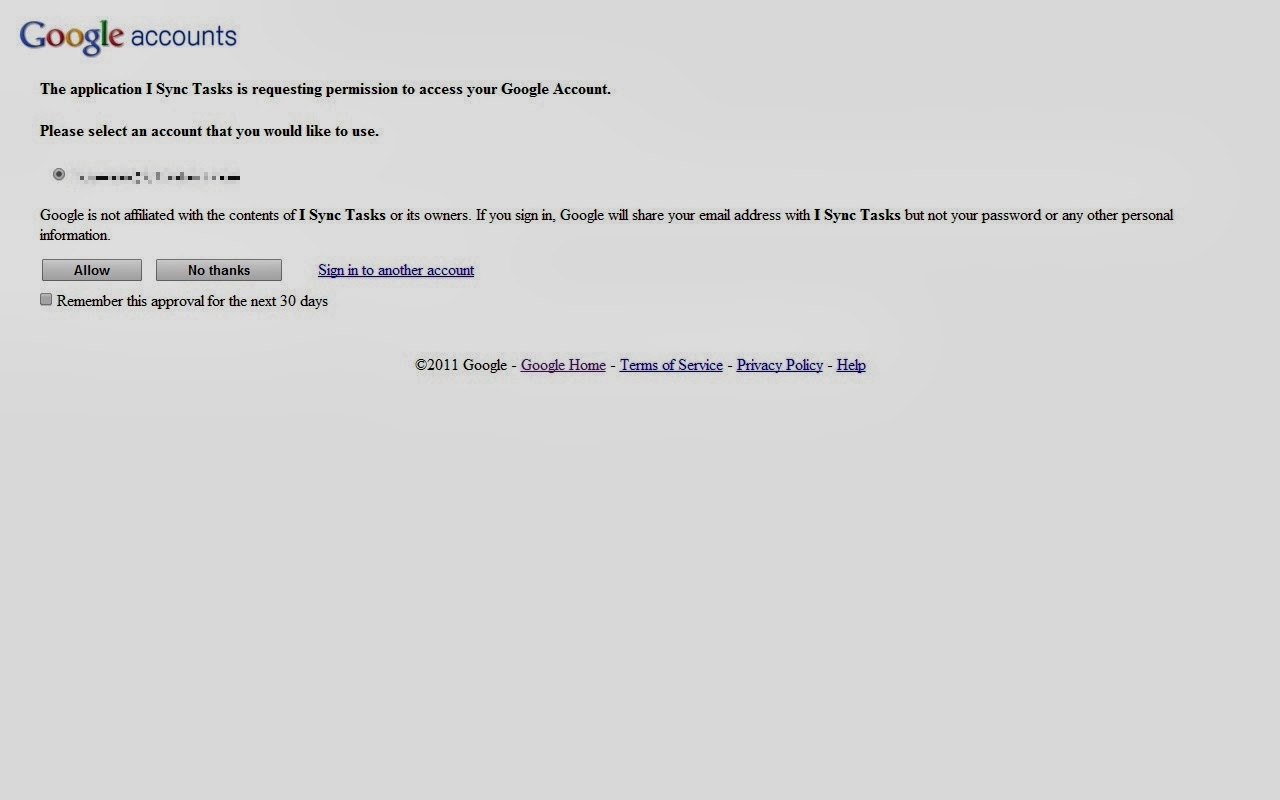 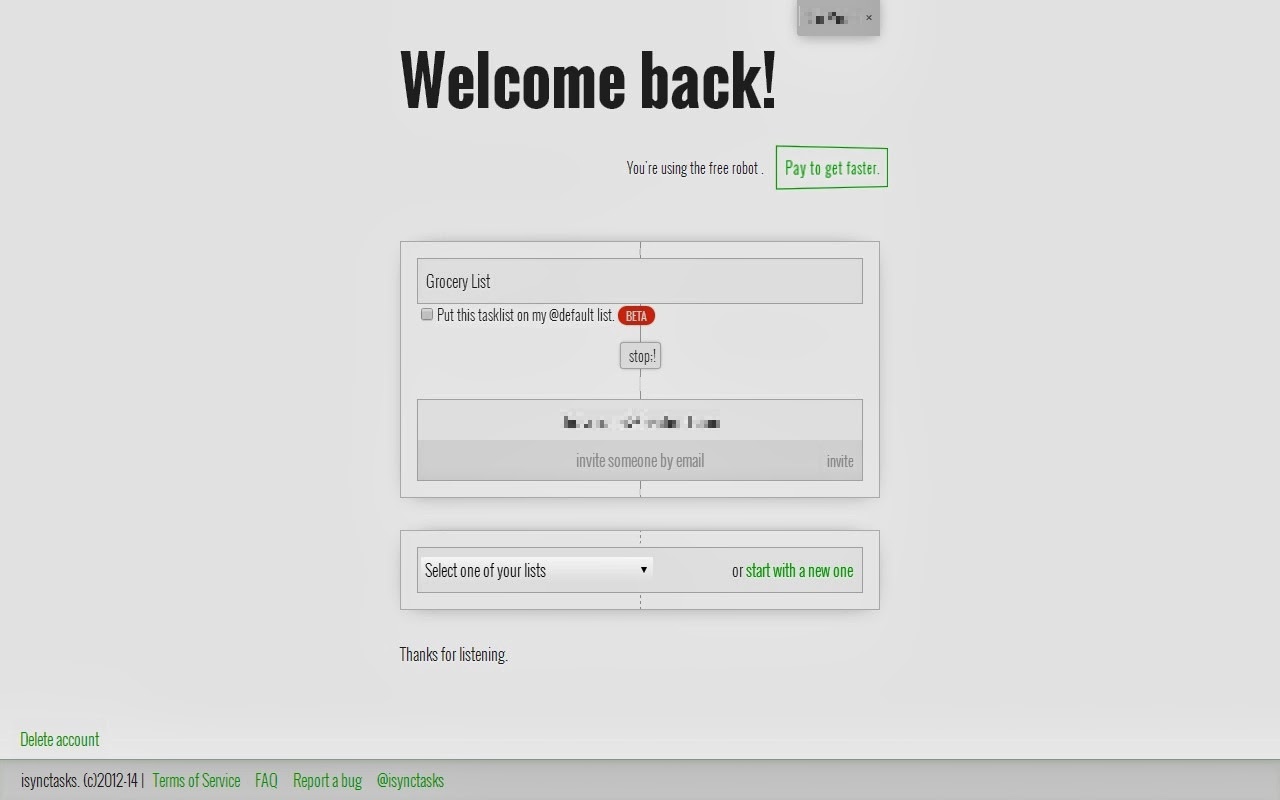 That's it. You can contribute $1 per month per user and make it sync more quickly. Seems well worth it.

Initially the sync was quick. Then after a while the frequency slowed down. I read the FAQ and it didn't specify the sync times. So I tweeted the author.


fastoy: @isynctasks I'm using isynctasks.de. What is the duration of the trial period? What is the sync frequency DURING and then AFTER the trial?
isynctasks: @fastoy 7 day trial; sync times vary, depend on multiple signals; within a minute during trial or if paid; within hours on the free plan.

Continuing my quest for life in the cloud, I wanted to be able to share selected contacts with my wife. Remember that I have my private domain hosted by Google Apps.

The first solution was Apptivo but it was "bigger than a breadbox" (showing my age). I never did get it fully implemented as it was moderately complex. The upside is that it is free and you can sync contacts for 10 users with a 30 minute sync time. Here's their pricing. But it's messy. I never hooked my wife's account into it.

So I kept looking for something simpler.

I found Gmail Shared Contacts. The user side implementation is much simpler. Basically the domain administrator designates a contact group as shared and that's it. You can share 1 contact group with 25 or less contacts among unlimited users. Here's their pricing. The sync time is 1 hour. That's plenty for what I need.

The downside is that the application seems to be in transition. It has taken me over 6 weeks to finally get it working. The support is via e-mail from France but they are responsive and helpful. I'm hopeful that Gmail Shared Contacts settles down.

Both of these require the domain administrator to install a Google Marketplace App. Then you have a slight customization.
Posted by Ben Moore at 8:00:00 PM 0 comments

Neither Fish Nor Fowl 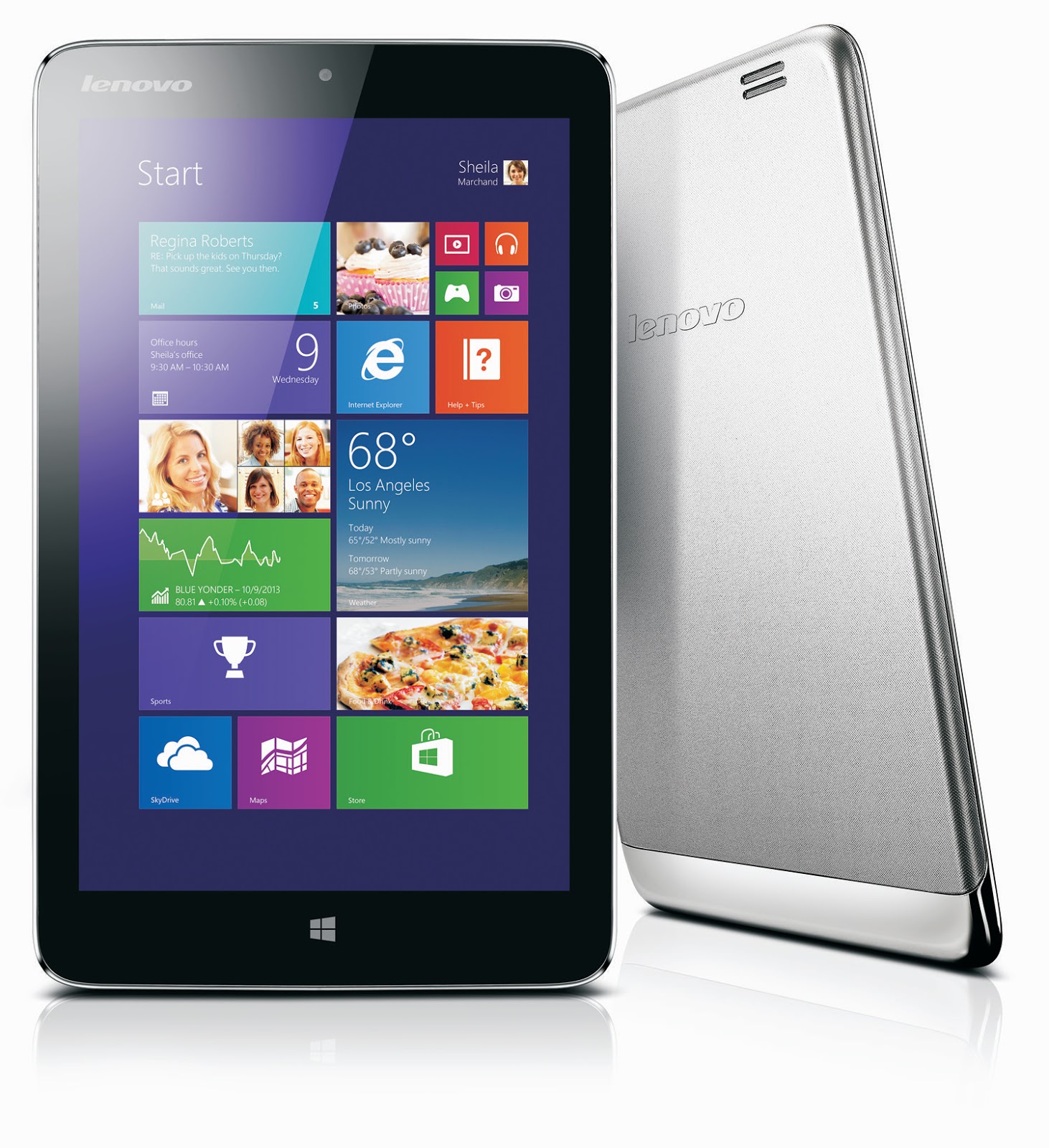 I'm not just echoing what many others have said but this thing is really neither fish nor fowl. Its screen is too small to run the Windows Desktop and it doesn't have a physical keyboard available. And the Modern (Metro) interface, let's just say it makes me want for iOS.

It's not so much that the Metro interface is bad, it's just that it is different and not discernibly better than iOS or Android. The steps to close a Metro app are just bizarre. webOS had this right and iOS 7 pretty much copied that. Android isn't any better than Windows 8.1.

The Start icon appears in various places in the navigation and does different things depending on where you are. 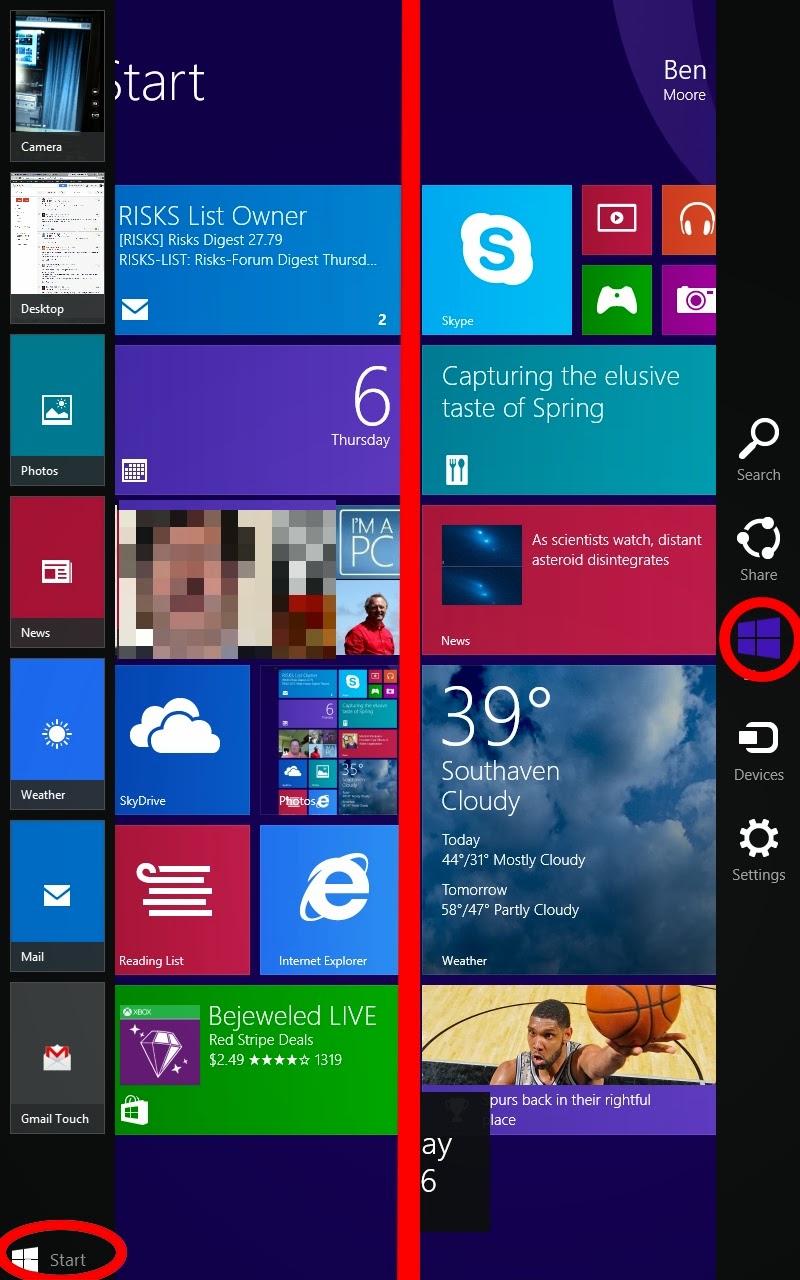 Would you have figured out that this is the Desktop tile? 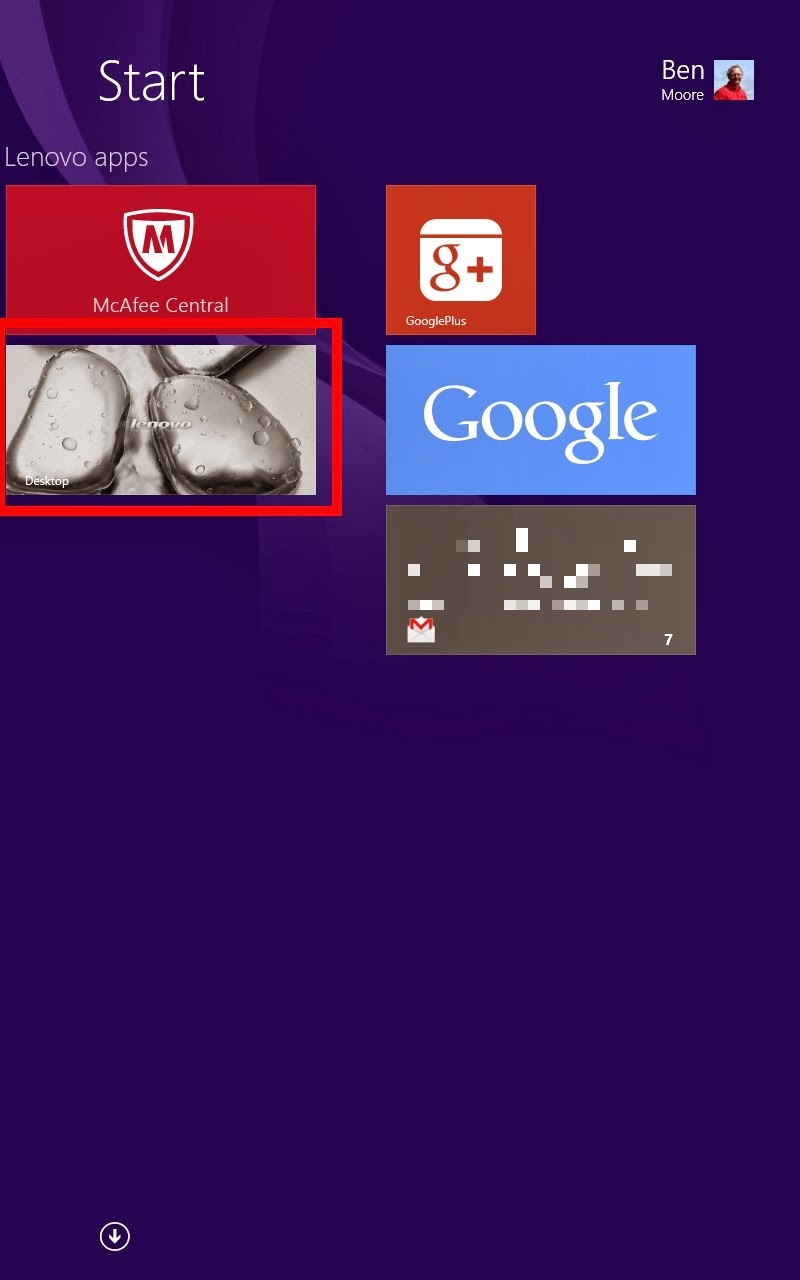 The physical Start button is capacitive so you have no sense of where it is nor does it "click" when you do touch it. There is some haptic feedback.

If your modus operandi is Microsoft that's probably good. If your modus operandi is Google or Yahoo that's at best confusing. I finally got the Mail app to read my Google e-mail using imap but it wouldn't send and didn't present any kind of error. There isn't a Google supported Gmail app and the Gmail app in the Store (Gmail Touch) wasn't intuitive to navigate, e.g. I couldn't figure out how to see my labels.

And the Live Tiles, they are pretty and "live" but some seem to change just to be changing. For example, the People tile keeps changing faces but when you tap on the tile it doesn't take you to the face that is presented. They don't represent senders of the e-mail in your inbasket. They're just random faces. Odd.

You And The Horse You Rode In On

Back before Fall 2013 here's what Chrome's New Tab Page looked like: 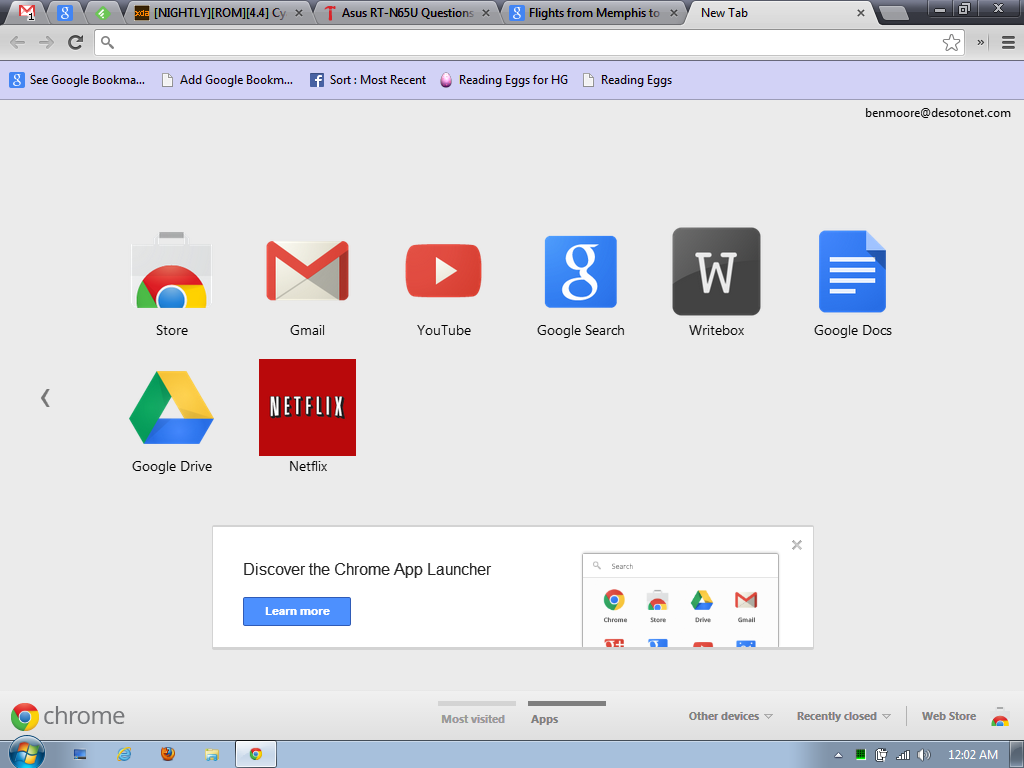 There's a selection at the bottom center that let's you choose whether you want to see "Most visited" or "Apps." This screen capture shows the "Apps." At the bottom right are choices for "Other devices" and "Recently closed."

I was a big user of "Other devices" as I would use this to go pick up a page that I had left open on one of my other devices.

The cursor was placed in the Omnibox ready to enter a search string. 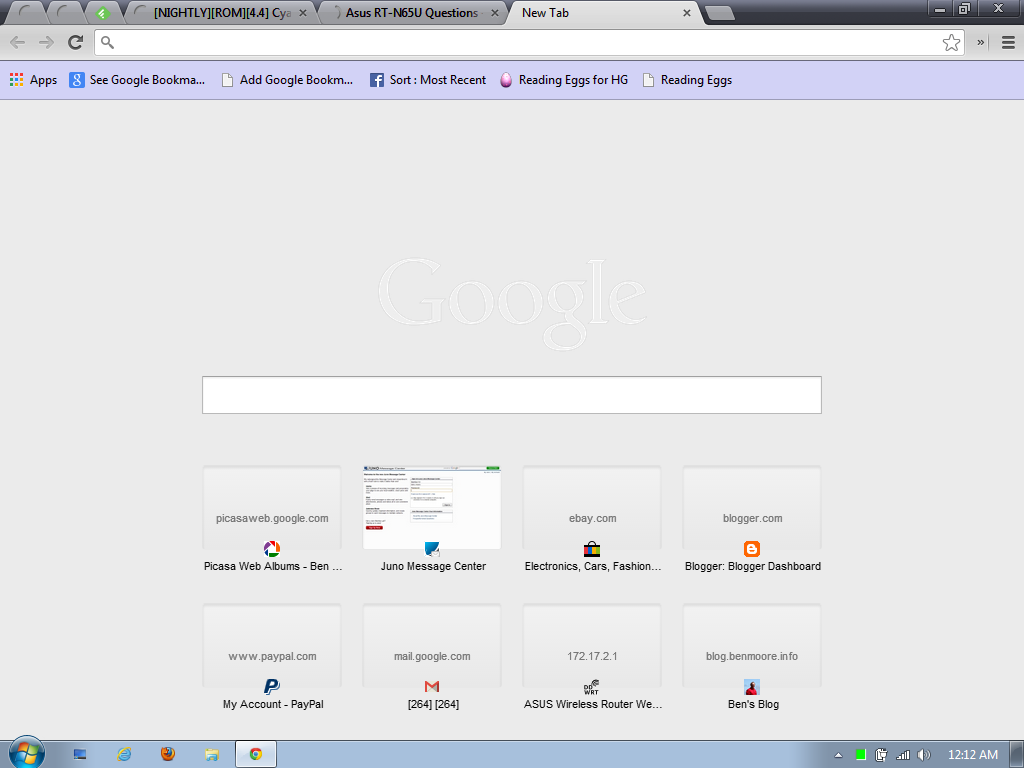 The top half of the screen is a Google doodle and a search field. But the cursor is still placed in the Omnibox ready to enter a search string. And the choice of "Most visited" or "Apps" is gone with only "Most visited" displayed. "Apps" is a link at the top left.

"Other devices" and "Recently closed" are in the "hamburger" menu at the top right.

Not much of this mattered to me except that the new "Other devices" list only contains 4 entries per device.

But it was possible to reinstate the previous New Tab Page by setting a flag in chrome://flags/. 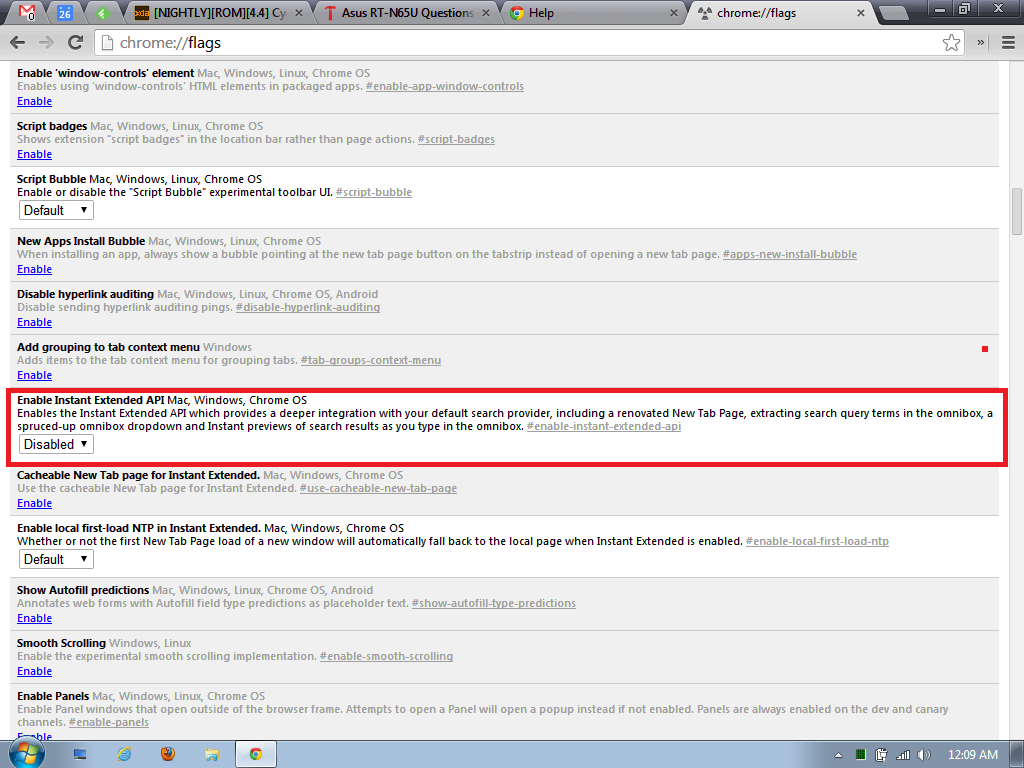 So I set this and moved on.

But Google has a way of jumping up and biting you.

In v33 of Chrome the option in chrome://flags/ is gone and there is no alternative to the new New Tab Page.

That this has caused quite an uproar is an understatement.

The Google Chrome team's response has been very reminiscent of the Firefox team several years ago. Remember what has happened to Firefox's usage share since then.

Then the leader of the Google Chrome team responded. 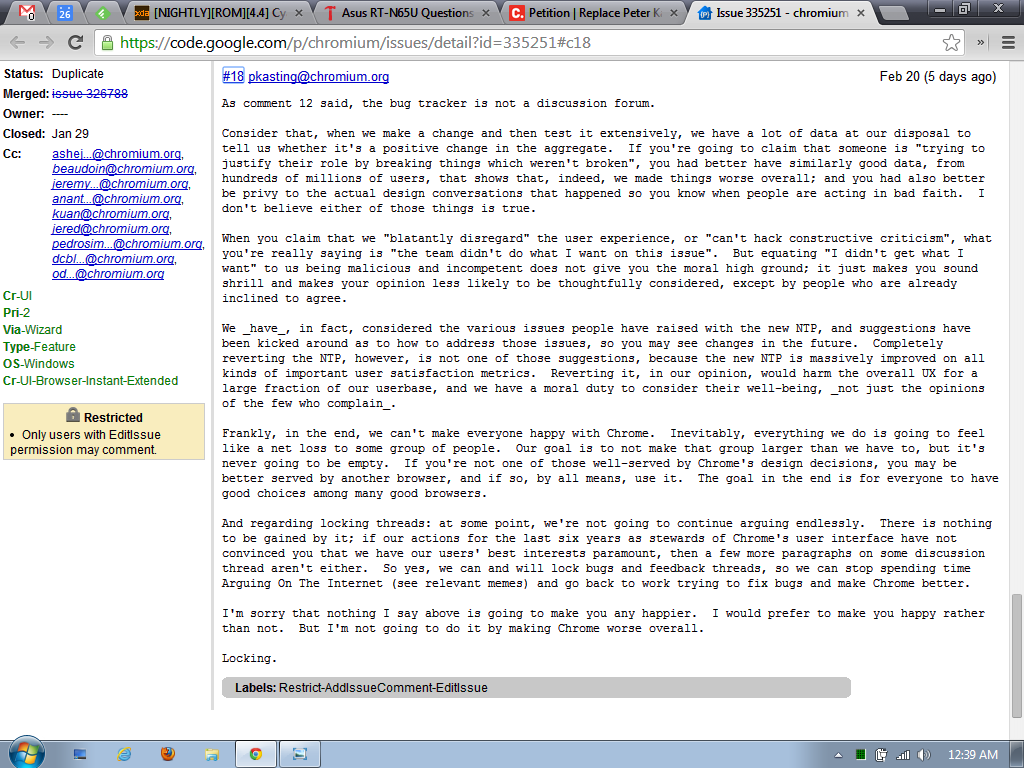 Not a very friendly response to say the least.

Scroll up in the above thread to see how this was raised in the pre-stable releases. And Google's total non-response other than locking the threads.

In the end it looks like the function that I want ("Other devices") is still available on the History page.

I think that this is another instance of Chrome deprecating old APIs for future function or compatibility as I discussed here. A little transparency on the part of Google would have really helped.