This is just a follow-up to my previous post on this topic.

I've continued to monitor this and it is working fine. I bumped my uplink speed to 400 Kbps for an extra 50 Kbps.

Recently I've been doing some big uploads to Youtube. The data is going across my LAN from a PC to the router and then across the WAN from the router to the Internet.

Here's what my link speeds looked like during this upload: 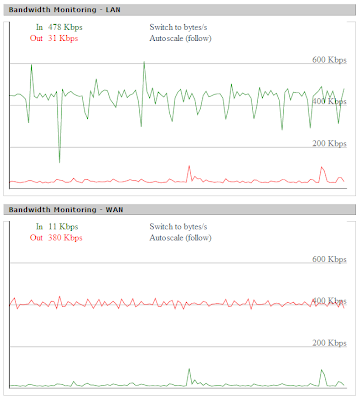 Ok, I'm a big Google user. I switched to keeping my bookmarks to Google Bookmarks with AddThis to add bookmarks.

I'd had Xmarks on my To Do list for a year or more. I made a run at it recently.

All seemed well for a couple of days until I noticed that my Chrome bookmarks had many copies of the "Google Bookmarks" folder.

It seems that Chrome's Sync settings were replicating Xmarks syncing.

So I needed to uncheck "Bookmarks."

But now my wife was complaining. It seems that when the Firefox Add-On was syncing to Xmarks the entire instance of Firefox would freeze. That raised the old adage of "When momma ain't happy, ain't nobody happy."

Xmarks is now uninstalled on all browsers.

That is a kludge and doesn't do anything for Firefox. I may try to make a run at Xmarks again.
Posted by Ben Moore at 8:34:00 PM 0 comments

I tried. I really did. But I returned the Chromebook.

It was a lot of little things. The SD card stuck out of the SD slot, the hinge was ugly, the keyboard mapping was odd, the touchpad was numb, overall it was slow, the updates to Chrome OS were behind, the Chrome extensions were backlevel, yada yada.

Besides the sluggishness in YouTube it was also slow updating Google Docs. I have a large Google Document that updates on the T420s in seconds. It updates on the X40 almost as quick but on the Chromebook it consistently took 20 seconds to update.

The price was great but the function was unsatisfactory.
Posted by Ben Moore at 8:37:00 PM 0 comments

I've just moved into the 21 century with my video recording.

Way back when (2004) I built a PVR using SageTV. I took it through several versions of software and hardware. The hardware (Dell GX270) is now so old. In early 2012 the UPS died and the fan got real loud. I used the excuse of the UPS dying to just turn it off.

Most of my usage at that time was to record analog TV shows and burn them to DVDs for my granddaughter. The quality was fine for her.

I had moved to TiVo for my HD TV timeshifting but I hadn't tried to burn that content to DVDs.

This past weekend there was a football game that I wanted to keep. I fired up the old SageTV and recorded it there as well as on the TiVo. I did my normal process using the SageTV copy and burned a DVD. It looked awful on my 52" Sony.

Back to the drawing board. I downloaded TiVo Desktop and installed it. Go into TiVo Desktop, click File / Preferences and uncheck the box that says "Use fastest method available..." Then I moved the recording from the TiVo to my desktop. It was huge! 31GB for 4 hours.

But now what could I do with it? The file type was .tivo. After a fruitless session of Googling I just tried renaming it to a .mpg. Doh!

Then VidoeRedo Plus could open it and operate on it. I used VideoRedo to edit out the commercials and then truncate it to the end of the game. That got the file down to 21GB.

Then I took it over to Ulead DVD Movie Factory 6. After fiddling around a little I convinced DMF to create 16x9 output and to use a double layer DVD.

It worked pretty good for a first attempt. There were some compression artifacts in the high activity shots but I think there are some settings that I can change to improve this in the future. Remember that the TiVo file is 1280x720 and the DVD in 16x9 is only 720x405 so DMF has to transcode the video.

By the way, while I haven't exercised the TiVo movement exhaustively I haven't encountered any programs that are copy protected.