One of my employees used to tell me that I was the only boss that he'd had that he would turn to for technical help.

Now it's my turn to turn to one of my former bosses.


Also do you use "storage sense" to clean files off the ssd or do you manually remove frequently...

I didn't know what he was talking about.

It turns out that Windows 10 Creators Update (1703) has a new feature "Storage Sense."

Windows Central has a good article on Storage Sense.

Storage sense is an optional feature, which is disabled by default, but when enabled, it'll proactively delete temporary files, like those created by apps. It'll delete files that have been in the recycle bin for more than 30 days, as well as files in the downloads folder that haven't changed in 30 days. If you're running low on space, Storage Sense even includes an option to delete the previous version of Windows 10 to make more room.

Click the Windows key and type "Storage". Click on it. Make sure the Storage Sense toggle is On. 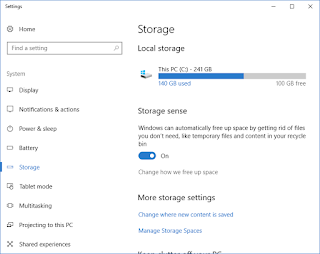 Then click on "Change how we free up space".

I don't see why you wouldn't want to check all the boxes there. 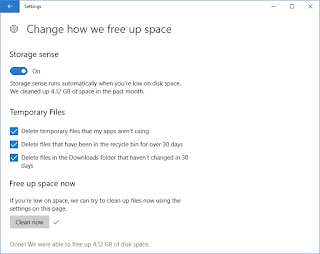 The last checkbox was added in Fall Creators Update (1709).

On the return from our recent trip to Canada, we cleared U.S. Immigration and Customs in Chicago in less than 5 minutes.

A couple of years ago before we traveled to Ireland we joined the U.S. Customs and Border Protection (CBP) Global Entry program.

At the time we had to travel to Nashville for the CBP interview. The interview took less than 5 minutes and we received e-mail notification that we had been approved before we left the parking lot.

According to Customs and Border Protection's page the benefits are:
You also get Global Entry cards (like a Passport Card) that are good for U.S. entry at land and sea ports of entry. We used these when visiting Campobello Island.

How this works is that when the flight attendant passes out the Form 6059B politely take it, put it in the seatback pocket, and go back to watching the movie. You don't have to complete it.

Then when you deplane and go to the Immigration area, watch for the Global Entry kiosks.

Place your passport on the reader, smile for the camera, put your hand on the sensor and answer the few questions. Take the receipt that the kiosk prints and head for the exit.

Wave the receipt politely to the Immigration agents and keep going.

Head to Starbucks and wait for your friends that didn't have Global Entry.

By the way there's also Mobile Passport Control that is similar.


Mobile Passport Control enables travelers to submit their passport and customs declaration information via their smartphone instead of the traditional paper form.

It's free but doesn't include TSA Pre✓ or the Global Entry Card. Mobile Passport Control requires some pre-work on your smartphone before you land. Once you're on the ground you have to connect to the Internet and complete some information. Then you are shown a barcode that you have to present to the CBP agents at Immigration and Customs.

Not all international arrival airports have Global Entry and fewer support Mobile Passport Control. We actually cleared Global Entry in Dublin on our return from Ireland.
Posted by Ben Moore at 7:52:00 PM 0 comments

I've written about KeePass several times in the past but it's been a while and I've made a couple of improvements.

A recent article in Sophos' Naked Security blog inspired me to update my use of KeePass.

Naked Security's summary of KeePass was:


KeePass is an open-source password manager that does all the things you’d expect a password manager to do at the very least – it stores all websites and service credentials in a highly-encrypted vault that can only be unlocked with one Master Password, which becomes the only password you need to remember.

There actually are 2 versions of KeePass. I've been using it so long that I started on version 1. Both versions are actively being maintained. There's nothing that I have wanted to do that version 1 doesn't do so I'm staying on that for now.

KeePass runs as a portable app. I have it on a USB drive that I keep on my keychain.

I also have it in a folder on my Dropbox including the active database. These are identical copies. I install on the USB drive and copy to the Dropbox folder.

On each of my PCs and laptops I have a shortcut on my desktop that points to the Dropbox instance of KeePass and opens the database read-only.

Don't worry about the security of the database. The KeePass database is AES 256 encrypted.

When I intend to update the KeePass database I run it from the USB drive.

When I exit KeePass with changes to the database, I have an DB_Backup plug-in that makes a backup of the database and invokes a BAT file. This BAT file copies the new database from the USB drive to the KeePass Dropbox folder on that PC or laptop. A few more details on this BAT file are here.

This accomplishes 2 objectives. First it backs up the database in case the USB drive is lost or damaged. Second it provides access to the database to my other PCs and laptops via Dropbox.

While I haven't dug into KeePass version 2 I understand that this cloud (in my case Dropbox) capability is built into the base product.

While KeePass isn't as integrated as LastPass or Google's Smart Lock, it does let you specify which URLs are related to a KeePass entry.

For example, the following is my entry for xmarks: 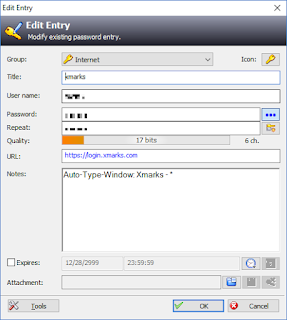 This tells KeePass to use this user name and password when invoked on a URL that begins with "Xmarks - ".

In "Tools" is a wizard that helps you build the Auto Type selection. You just choose the target window from a drop-down list. Incidentally since KeePass is using the window name you can also use this feature for non-browser logins.

There is also a feature that will generate random passwords for you.

You can specify your own key sequence to invoke KeePass login. I use the left Ctrl key and the / key. Just place your cursor in the user name field and press your key sequence. KeePass will type the user name and password into the target window. There are simple script-like commands to tell KeePass when to tab, press Enter, etc.

I also use KeePass as an address book. KeePass allows you to create various folders in its database. I have one called "Names and Addresses."

As I mentioned in my Back and Forth post I'm using an iOS app Air Transfer to copy photos from the iPhone to my Windows laptop. 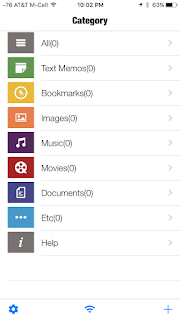 On my laptop I browse to the URL that Air Transfer presents. It pretty much never changes. 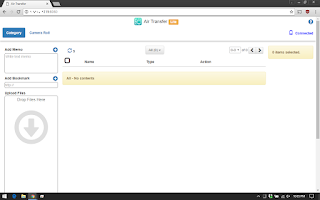 On my laptop I click on the link to take me to the Camera Roll. 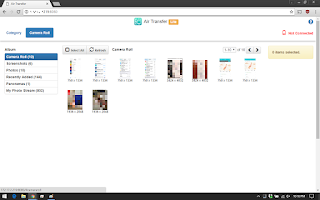 I select the photos that I want to transfer to my laptop. The free version of Air Transfer lets you select 10 photos at a time. The upgrade to the Pro version is $1.99. 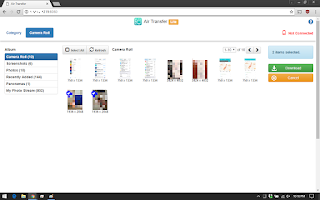 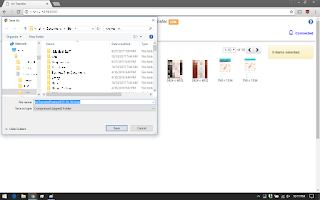 Air Transfer then creates a zip file and downloads it to my laptop.

When the download is complete I go back to the iPhone, double-click the home button and swipe away Air Transfer.

Then I launch Apple's Photo app and delete everything on the Camera Roll.

Why don't I use Dropbox? Actually I do. But not for photo transfers. Dropbox renames the files. I prefer to maintain the original file name.

For a thorough comparison of Google Photos and Dropbox revisit my Dropbox vs Bluetooth vs Google Photos post. Think of Air Transfer as the iPhone equivalent of using Bluetooth on Android.

Here is one of the screen captures from the app store: 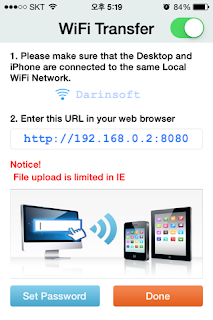 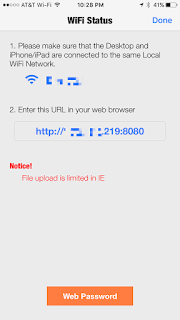 Because there is no slider for WiFi Transfer you must swipe away the app. I asked the developer about his. He replied quickly.


I am currently overhauling the internals of the App.
The on/off switch was temporarily eliminated in current version.
To disconnect Air Transfer, you can either shutdown the WiFi of iOS or terminate Air Transfer.
The on/off function will be available in later updates.

A similar app is File Hub. It has a lot broader set of capabilities than Air Transfer but includes a Wi-Fi transfer service. I didn't stick with File Hub as it requires a web password on each execution. If you're using a public Wi-Fi this is absolutely necessary but on my home Wi-Fi this was just a nuisance.

One day on my deals feed was this gadget: 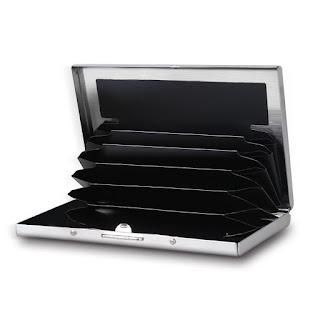 The post said "We can all afford to be paranoid at this price."

Should we really be paranoid?

So I went to wikipedia.


The examples and perspective in this article may not represent a worldwide view of the subject.

Contactless payment systems are credit cards and debit cards, key fobs, smart cards or other devices, including smartphones and other mobile devices, ...

Mobil was one of the most notable early adopters of this technology, and offered their "Speedpass" contactless payment system for participating Mobil gas stations as early as 1997. 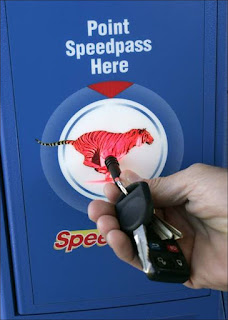 What does that really mean for you and me?

Remember that opening statement from wikipedia: "The examples and perspective in this article may not represent a worldwide view of the subject."

Here are some valid concerns but it's from the UK.

Here is a North American-centric view of contactless payment systems.

"Nothing to see here, move along".

But remember that wikipedia also said: "...including smartphones and other mobile devices."

But smartphones and other mobile devices won't fit in the little case.

Although these are "contactless" they are based on NFC. Although NFC is contactless there is always another layer of security, e.g. TouchID for Apple Pay.