As you can imagine, my car kinda looks like my desk at home - a real tangle of wires. When I got my new car I tried to clean it up a little.

What I needed was a cigarette lighter splitter for my console box. I found one at Meritline for $4.99 (now $3.99) with free standard shipping (from Hong Kong). 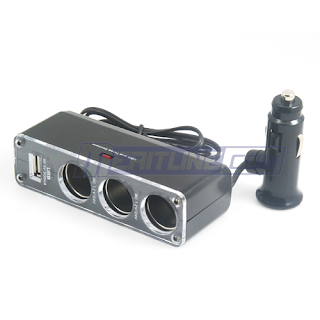 This has worked fine. Some plugs are a little loose in the sockets but I haven't found that to be a problem so far. Notice that it has a USB power socket too.
Posted by Ben Moore at 7:31:00 PM 0 comments

This is really more an HP issue that an Windows 7 issue but I ran into it because of Windows 7.

In my research for the Big Honker, I looked for drivers for all my peripherals. This resulted in having to buy a new scanner but my HP printers were good.

I have an HP DeskJet D4260 and an HP LaserJet 1020. Neither is brand new but not more than a couple of years old.

The HP support pages for each showed that there were Windows 7 64-bit drivers available so I downloaded and stashed them away for the install. I was a little cautious as the LaserJet 1020 driver was only released in November 2009.

When I actually did the install, I was surprised that the DeskJet D4260 driver was already loaded and it worked immediately. I loaded the LaserJet 1020 driver and both were working. They worked from my XP laptops using the existing drivers as well.

Or so it seemed.

My wife had a color page she needed to print from her laptop. When she did, the colors were off, blues were grey, yellow was pink, etc. Of course you immediately suspect that you're low on ink. I went to the Big Honker and printed a test page and it looked Ok but it really doesn't have much color.

Then I created an image in Paint on my laptop that had big blocks of primary colors. When I printed it, the colors were off there too so it was off to WalMart. $18 later for a color cartridge, I was back.

I recalled that the test page printed from the Big Honker was good. So I printed my wife's document from the Big Honker. Worked fine. So that meant the driver that came with Windows 7 Home Premium 64-bit wasn't compatible with the previous drivers.

I installed the new drivers that I had downloaded earlier on the XP laptops (they worked on XP also) and all was well. Why would HP change the color mapping of the drivers?
Posted by Ben Moore at 1:39:00 PM 0 comments

My main desktop PC (which I call SERVER) is getting long in the tooth. It is a refurbished HP Pavilion 522c that I bought in 2003. It has an Athlon XP2000+ 1.67GHz processor. I'd upgraded it along the way with memory (256MB to 1GB), a DVD burner, 2 bigger hard drives, even a Firewire card.

I did my typical drop the partitions and install a clean version of XP Professional right out of the box. But I had never refreshed it. It was getting a little flaky.

Intel calls its virtualization VT-x. AMD calls theirs AMD-V. AMD's is pretty simple. Pretty much anything you can buy supports it. Intel's is another story. wikipedia says "Intel uses the feature to segment its market." I would add "and to confuse."

All the Core i3/5/7 processors support VT-x but systems with those processors are expensive and you know how I am. Core 2 Duo/Quad was more my price.

So go look at this page from Intel. Many of them don't support VT-x outright. The rest refer you to their SPEC details. That doesn't help either. I ended up with an E6300. Way too confusing.

I got the E6300 in (another) refurbished HP Pavilion p6112p from buy.com. It has a 2.8GHz Core 2 Duo, 8GB of RAM, a 1TB hard drive, a LightScribe DVD burner, gigabit Ethernet, and a bunch of other bells and whistles. It came with Windows Vista Home Premium 64-bit but was eligible for a free Windows 7 upgrade. The motherboard details are here.

I did my normal process of dropping the partitions and doing a clean install of Windows 7 Home Premium 64-bit.

I put one of the leftover 400GB hard drives from my Drobo in it and added a second DVD burner.

It's up and running and doing fine. I haven't had the first problem with Windows 7 64-bit other than one program from the early '90s won't run. How I resolved that will be explained in a later post.
Posted by Ben Moore at 11:47:00 AM 0 comments