I went to the HP Technology Forum last month. As usual, it was excellent. They just posted the presentations to their web site and I went out and downloaded the decks for the sessions I went to and was interested in.

One of them was a .pptx file. I guessed what that was (an xml file from Office 2007) and being curious, I doubled clicked on it to see what would happen. To my surprise, PowerPoint 2003 immediately opened it (or tried to). Seems that PowerPoint 2003 has a file association for .pptx files.

As expected, PowerPoint 2003 couldn't open it. Unexpectedly, I got an interesting pop-up. 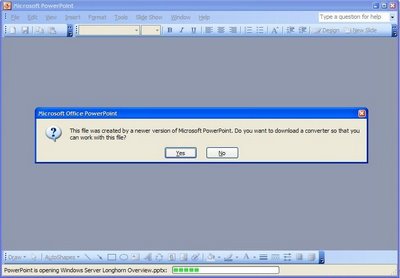 Of course, I clicked on "Yes."

This took me to the 2007 Microsoft Office system preview site where I was offered a "Microsoft Office Compatibility Pack for Word, Excel, and PowerPoint 2007 File Formats." Sure, I'll bite.

I expected some kind of viewer but again I got the unexpected. When I downloaded and installed it, I then had the ability to "Open, edit, save, and create files in the robust file formats new to the 2007 Microsoft Office system in Microsoft Office 2000, Office XP, and Office 2003."