My company has cellular agreements with Cingular (AT&T) and Verizon. Those with Verizon phones who travel internationally have had to take a second GSM phone with them. Verizon recently introduced the BlackBerry 8830 which has both a CDMA radio and a GSM radio. 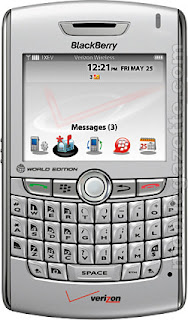 When I traveled to Ireland recently, I took one of the evaluation units with me. It still had a sticker on it that said "Property of Research in Motion." I stopped by the local Verizon store to get them to show me how to work the GPS (more later) and they had never seen one!

Oh, on GPS. In spite of the indication from the BlackBerry 8830's web page that it has GPS (expand Features), the Verizon site doesn't mention it and Verizon's Customer Service said it didn't. I sure wish I had GPS in Ireland!

The Verizon BlackBerry 8830 worked fine in Ireland. I switched my Lotus Notes e-mail over to it from my Treo 650 running BlackBerry Connect. Each night, I would fire up the 8830 and let it download my e-mail. Verizon has a roaming agreement with Vodafone and that's the only network I observed the 8830 connecting to. I didn't try to get it to connect to other GSM networks.

One thing I particularly wanted to test was the dialing strings required in that GSM uses the "+" followed by the country code followed by the local number. Consequently, I have all the phone numbers in my Treo specified as "+CAAALLL-LLLL." On the 8830, I just put the 10-digit local number. I was worried that the 8830 would be confused by the "+" when in CDMA mode although I never tried it.

My findings were that the 8830 realized it was in GSM mode and inserted "+C" (where "C" seemed to default to "1") so the call was placed properly. This was just what you would want the 8830 to do.

Incoming calls worked fine also. One one occasion, I had problems placing calls in that I got "Call Forwarding - Conditional" and the call failed. After retrying it a couple of times it always went through. Changing the dialing string to explicitly include "+1" or "0011" didn't matter.

I still prefer my Treo 650 to the BlackBerry 8830. The keyboard feels too "smooth." There isn't enough tactile feel to the keys. You can't easily tell when you move from key to key. Also, the "pearl" roller-ball is sluggish when the device is busy otherwise, e.g. downloading e-mail. The roller-ball doesn't have any feedback when it is clicked.

The BlackBerry operating system and GUI are obviously different from the Treo 650 and my experience is probably more indicative of this than any real problems with the BlackBerry. It's been almost 2 years since I've used a BlackBerry 7290.
Posted by Ben Moore at 5:31:00 PM