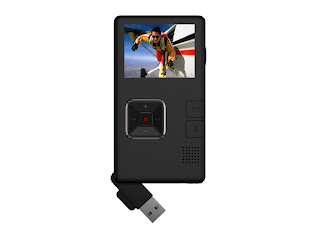 As a going-away present, my former co-workers gave me a gift certificate at amazon.com, one of my favorite stores. The timing (of the gift certificate) couldn't have been better.

My daughter was expecting our first grand-baby so I was in the market for a grand-parent's camcorder.

I had already been shopping for a camcorder. I wanted something with a USB connector. Not only did the Vado have that but it had a built-in HDMI connector. It uses its own 8 GB internal storage so I didn't have to buy a separate SDHC memory card.

The size is amazing. It is only slightly larger than my wife's Blackberry Pearl. It charges from the USB connector so you don't have to fool with a power adapter.

It wasn't obvious from the advertising but the USB presents a drive to Windows that has Autoplay. If you let the autorun.inf run, it installs a codec for the Vado and then launches a limited version of muvee's Reveal. It is pretty crippled, e.g. it won't convert to DVD, but it does Ok.

It even has a button that directly uploads to youtube. I've also used its capability to consolidate a couple of clips and output a .wmv.

The codec that is used by the Vado is a proprietary h.264. Even with the Vado codec installed, I've not been able to process the files directly using uLead DVD Movie Factory or Pinnacle Studio.
Posted by Ben Moore at 1:58:00 PM