Living In the Cloud

A while back I mentioned a couple of Cloud apps that I use.

Although I'm a huge Google user, I've been using Dropbox for even longer than Google Docs/Drive. And I've found that the app ecosystem around Dropbox is a lot more mature than around Google Drive.

I started off just trying to find way to maintain a To Do list that I could access from anywhere. I came across Epistle, an Android app, that lets you edit a text file from Dropbox on your Android device.

Here are my Epistle settings: 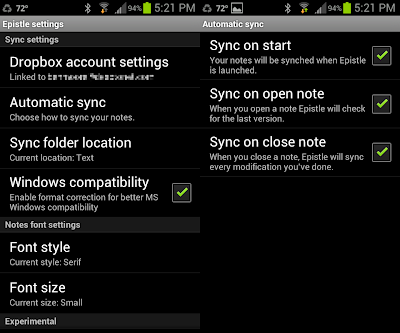 Obviously then you can edit the text files from your PC using Notepad or Writepad.

So my issue with To Do list was done. That worked so well I began looking for how how I could leverage that solution.

My wife and I are always making grocery lists on scraps of paper and then leaving them at home when we drive by the grocery store.

Epistle would fix that!

But my wife uses an iPhone.

One thing I don't like about iOS apps is that there are so many fewer free apps. It's not that I mind paying for apps, it's just that simple function should be simple cost, maybe even free.

After looking at a number of iOS apps that allow editing of Dropbox text files, I settled on Nebulous Notes Lite. As you'd guess from the "Lite" moniker, there's a paid version that eliminates the ads but it costs $5. Way too much.

Here are my Nebulous Notes settings: 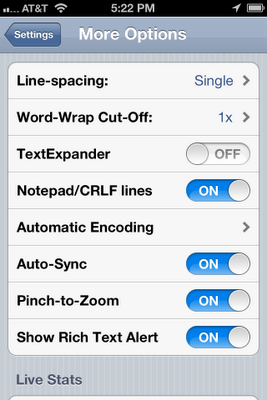 My wife loves it. She'll update the grocery list and text me to stop by the grocery store and I've got a complete list.

I got a new Google Chromebook. No Notepad there. Sure I could download a file from Dropbox, edit it using Google Docs, and reupload it to Dropbox but that wasn't cool.

So I Googled it some and found Writebox. It does the same thing as Epistle and Nebulous Notes but from a browser. Perfect for the Chromebook. And there's even a Chrome app if you want it more integrated.

Writebox doesn't have an automatic sync option like Epistle and Nebulous Notes so you have to press Ctrl+S when you're done.

GroceryIQ is a great cloud based app for grocery list sharing. It works across android and is. I really like Google Task organizer for Android. It will sync with all your Google task lists plus adds a little extra functionality like reminders.

Thanks. I'll look at GroceryIQ. I use Tasks Free by Team Tasks for Google task management.