In some ways I'm still old fashioned. I still have POTS. And I have DSL. I've had my challenges with DSL but I'm living with it. I just go to my daughter's house to upload my videos and I've come up with an alternative to cloud backup. But I'm just making excuses. 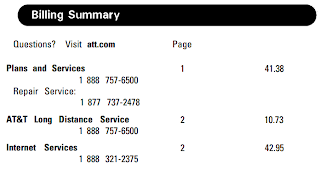 Yeah, there are places where I can make minor savings. I can get the POTS down some and drop long distance. Then we could use our cells for long distance. But that requires re-training. I went and sat down with AT&T and they couldn't come up with any savings. I did learn something that I'll raise later.

In my news feeds I'd come across several articles on VoIP.
These inspired me. I've been using Goole Voice for my business line and was very satisfied with it.

The Obihai devices keep coming up in these discussions. There are several models including OBi100 and OBi110. 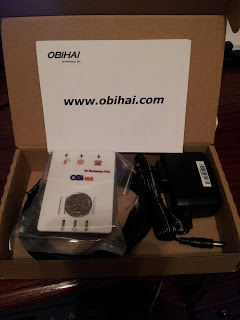 That's a quarter sitting on top of the device.

Following the instructions here I setup the Google Voice account on the OBi100 in less than 5 minutes.

I plugged a spare phone into it and played with it. It worked fine.

Then I forwarded my POTS number to the temporary Google Voice number.

I logged into the associated Google Voice account and there was nothing in the inbox. But there were entries in the spam folder. Google Voice was sending those calls directly to spam. Since I made this switch I have received NO telemarketer calls.

My plan is to continue with this configuration for a month to make sure I understand it completely.

The next steps are to install Comcast Internet and cancel AT&T DSL. Then port the POTS number to Google Voice.
Posted by Ben Moore at 8:23:00 PM