You'll recall that I implemented Quality of Service (QoS) in support of my Voice over Internet Protocol (VoIP) migration. And subsequently I moved my Internet connection from AT&T's DSL Extreme to Comcast's Performance Internet.

Here's what Comcast looked like via speedtest.net over the Gigabit Ethernet.

But when I connected over Wi-Fi downloads were much slower.

Hmmm. Why? Was it the router?

Remember that I was running a Cisco E2000 with dd-wrt. I'd had lunch with an old friend and he mentioned that he had moved to a new Asus router and it significantly increased his speed. I bought an Asus RT-N65U.

I installed it and ran the speedtest.net test over Wi-Fi again.

Here's what Windows thought about the Wi-Fi from the routers. 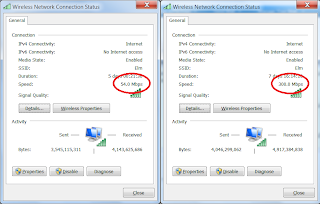 My speculation is that although the E2000 supported 802.11n it looks like dd-wrt didn't enable it. Or it could have been something that I did or didn't do.

The Asus supports "2.4GHz and 5GHz concurrent dual-band transmissions with dual processor design for stronger signals and faster connection rates up to 750Mbps combined." I think that's the difference.

I haven't enabled any QoS on the Asus.

The Asus easily supports guest networks so I setup the "attwifi" SSID that I mentioned here. I haven't had any visitors come by yet but all my AT&T smartphones see it and put it at the top of their list.