My EMCO Ping Monitor had been complaining about brief Internet outages for a couple of weeks. I almost never noticed them. When I did the Internet recovered before I could do much problem determination.

One day the blip lasted 10 minutes so I called Comcast.

After a few minutes of fruitless discussions with the Philippines I was transferred to to Lisa in Denver (888-824-8988). She said that my signal levels were low and scheduled an appointment for 2 days later between 10:00 and noon. They had offered to come the next day but I was not available.

The evening of the next day Comcast called me and said that they had made repairs in my neighborhood and wanted to know if my problem was resolved. As it was so intermittent I couldn't say either way so we let the appointment stand.

At 9:00 on the morning of the appointment I got an e-mail that the technician was at my house. I looked out the window and there he was an hour early.

Then my phone rang and he announced himself.

He was a Comcast employee, not a contractor, and was very capable. Before he called me he had checked that my signal levels were good. He was aware of what they had done on the previous day and said that that repair was what had corrected my signal levels.

I haven't had the problem since.

Then on Memorial Day, both the Internet and cable TV went down. 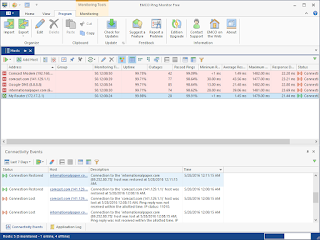 When I called Comcast I was greeted with a message that there was a problem in my area and they were working on it. I found this just down the street. 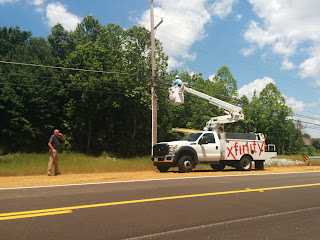 The service was restored before the time they had promised.

And finally, the speed. 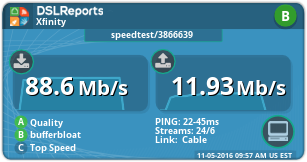