I've always been looking for a tablet solution that I could use to take handwritten notes that would convert to text.

The Microsoft store carries the Asus Transformer Mini in a Signature Edition. 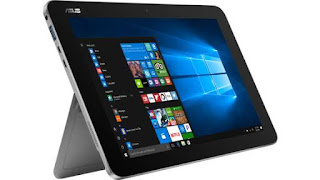 The keyboard snaps on magnetically like the Microsoft Surface. And when you flip it around behind the tablet it is not sensitive to touch. It also has a kickstand like the Surface when you're using it on a desk. The keyboard has a small loop to hold the pen.

While the Asus Mini comes with its own charger you can simply use any microUSB charger. And you can easily make it all day on a single charge.

The light weight is impressive. Even with the keyboard the Asus Mini weighs 1/2 as much as the ThinkPad X220 that I was using and that's without the ThinkPad's charger.

For protecting the Asus Mini I got a sleeve from eBay. The one for a 10" tablet fits fine and I even store the Asus' pen in it.

The sleeve protects the Asus Mini when you are traveling with it but I wanted to protect it from scratching when I set it down on a rough surface. I found a faux carbon fiber skin for a Macbook. A few minutes with a razor blade and it looks like it was made for the Asus Mini.

It came with Windows 10 Home but I upgraded it to Windows 10 Pro with a key from SCDKey. I didn't have to have an new DVD. I just entered the key and sat back a couple of hours. Don't forget to cleanup the old files when you're satisfied with the upgrade.

Then I did a Windows 10 "reset" just to make sure it was clean. That took another couple of hours.

It also comes with a free copy of Office Mobile. While this is somewhat limited the functionality is fine for casual usage. It's a little bit picky about which versions of Word documents that it will open for update but it will convert most versions to the current format.

But the magic is the handwriting app. The program I use for handwriting is Nebo from MyScript (remember them?). I got it for free right after it was released. And I'm not the only one impressed by Nebo.

Nebo supports exporting to Microsoft Word. Handwritten notes can be exported to Word or saved as text. Headings, paragraphs, lists, color, bold, highlight, are all preserved. I use the "View in browser" feature to save as PDF.

In that the Asus Mini has an active pen, the Nebo app is insensitive to your palm touching as you write. The MyScript apps that I have used on other tablets have tried to address this with a palm "screen" but are generally unsatisfactory.

Besides its handwriting function don't forget it's a full Windows 10 PC, e.g. Chrome, Dropbox, etc. Yeah, it's not the fastest but everything works. If you need more disk space than the 32GB drive provides you can add a microSD card. I still have more than 20GB free on the internal drive. 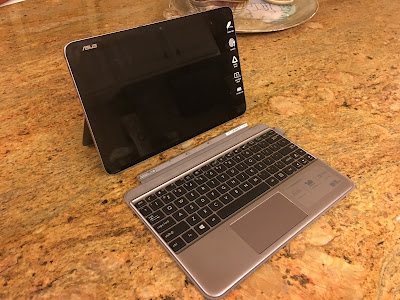