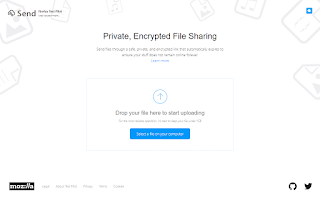 ...you can securely send files to a contact using a link that only works once. The encrypted file, which is stored on Mozilla's server, is destroyed immediately after it has been downloaded once or after 24 hours have elapsed. 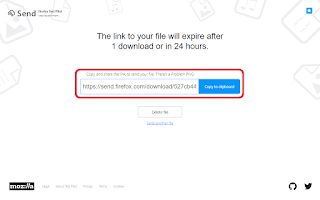 This also works on Chrome and Edge and supports files up to 1GB. The files are encrypted before uploading, can only be downloaded once and deleted after 24 hours. Within the 24 hours you can revisit Firefox Send and you'll get a status page of the files you have uploaded that haven't been downloaded. 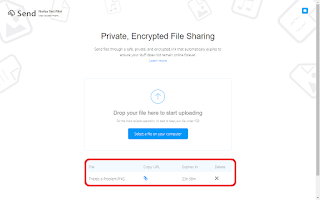 The page does say "Firefox Test Pilot, web experiment" so I wouldn't bet the farm on it for now.

If you're really geeky, look at the URL that Firefox Send gives you and then listen to Steve explain it.
Posted by Ben Moore at 7:22:00 PM