Rereading that post this is what jumped out at me:

That was generous. It was so slow that I eventually set it aside and bought a Nexus 7 2013.

Recently I decided I wanted a cheap tablet to keep in the car. I looked at Amazon Fire Tablets but then came across my old Nexus 7 2012 in my junk pile.

I spent some time Googling for ROMs for it and found a couple of Android 7.1 Nougat ROMs.

The people who had flashed Nougat had good things to say.


Still have plenty of memory space. It all runs nice & smooth. Very well done guys!Everything works great with the latest version of the rom. Thank you for your work !Thank you very much for this rom. It's very smooth and fast.

So I dug out my old ThinkPad with adb and the Nexus drivers and got to work. adb is always a little bit of magic and the busted screen on the ThinkPad didn't help any.

First I had to install twrp. As usual this was the hardest part.

Then I flashed the ROM and pico Gapps.

After a couple of hours the Nexus 7 2012 was booted on Nougat. 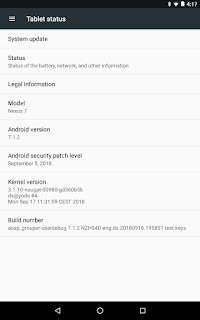