I'm a HUGE ThinkPad fan. When I updated my X250 to Windows 10 1903 one of the few problems I had was that when the screen would turn off after not using the laptop, it wouldn't turn back on when you began using the laptop again.

You could tell that the laptop was working. The power light was on, Sometimes you could hear the fan running. It would even beep if you (blindly) clicked on something wrong.

Thankfully I have the Power button set to hibernate when pressed. I could hibernate and then resume and the display would come back on.

I had gone to the Device Manager and checked the driver for the display adapter. It was current with Lenovo's guidance.

Then while still in the Device Manager I checked the driver for the monitor. It was back-level and "Update driver" loaded a new one from Lenovo. 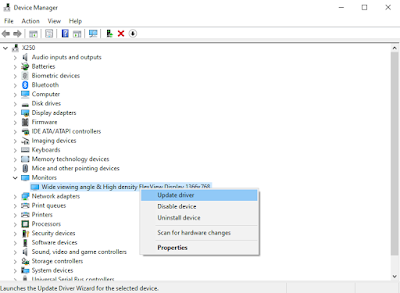 Seems to be fixed.

While on this quest I came across this workaround:


Solution 5 - Use a keyboard shortcut to restart the graphics driver

Now, this isn’t a solution but might act as a proper workaround until you resolve the issue completely. Maybe with one of the provided solutions or some of the future Windows updates address this. Either way, there’s a black screen and you can’t do a thing besides physically powering off your PC and starting it again. However, there’s a once keyword combination which will, when utilized, restart the graphics driver and the screen might just turn on.

This helped some HP users who were plagued by the same issue. The combination you should try out is Windows key + Ctrl + Shift + B. It’ll automatically restart the graphics driver and the screen should turn on from the Sleep mode.