Google recently came out on the short end of a $5 billion class-action lawsuit concerning Chrome's Incognito mode.
Apparently as a result of that lawsuit, Google is being more obvious about what Incognito means.
I thought it would be worth sharing. Here is the new splash screen for Incognito mode. 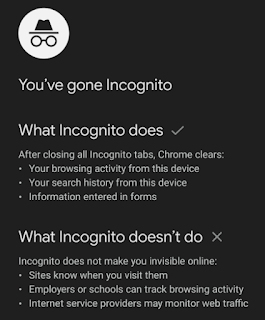 What Incognito doesn't do
Incognito does not make you invisible online:
• Sites know when you visit them
• Employers or schools can track browsing activity
• Internet service providers may monitor web traffic

One subtlety in the first section is that Chrome doesn't take any clearing action until after you close all Incognito tabs. What this means is that if you visit a site that only allows limited visits from a non-subscriber, the cookie that tracks your visit isn't deleted until you close all Incognito tabs. Specifically, if you have Facebook open in an Incognito window and then visit a paywalled site, the count of you visiting the paywalled site will remain until you close the Facebook Incognito window.
It's probably a good time to revisit How to Sandbox Facebook.
Posted by Ben Moore at 7:24:00 PM