Way back when I had worried about backing up my phone's SIM card. Here's my blog entry on it. I put it on my 2005 Christmas list and Santa came through.

I played with it and played with it. It is a little odd in that it is actually a serial port device. To get it to connect via USB, you have to install a USB to serial port driver. This makes your computer see a new COMx port (in my case COM3) but you actually plug it into a USB port.

When I did all the installation stuff, the application kept saying that it got an error when connecting to the reader. I was suspicious of the USB to serial port driver.

After I reformatted my ThinkPad recently, I decided to try it again. I set a restore point and reinstalled it. Same thing. I restored to the new restore point and this time, I let Windows find the drivers on its own. It churned and churned but finally found them. Then I installed the application and fired it up.

I still got an error connecting. Hmmm. I wonder if I have the SIM card in the reader correctly? I flipped it around and tried again. It worked. Damn, I could have done that a year ago. 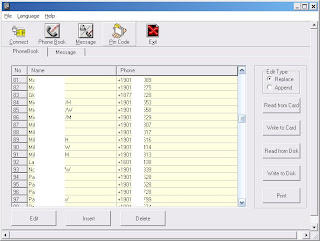 Not only can you read and rewrite (I haven't tested this yet) the SIM card, but you can export the data to a file on your PC.
Posted by Ben Moore at 9:13:00 PM