When I finished setting up the new HD TV and furniture, the old Dell GX270 for SageTV seemed out of place. It wouldn't fit in it, under it, or behind it.

So what to do? I moved the SageTV system into the "computer room."

I went back to the SageTV web site and looked around. I found they had a Hauppauge Media Extender. This is similar to the Microsoft Media Center Extender.

While Sage sells it, it is really just Hauppauge's MediaMVP 01000. Sage's is bundled with a license but I had a license that I could reuse for PlaceShifter (more later).

It comes in wired and wireless but wired was all I needed as I already had Cat5 at the TV. 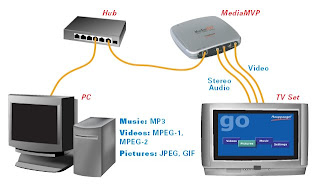 I bought it from amazon.com. The first one was DOA so I went back to Amazon's site. They had a button to return it and even provided a pre-paid mailing label. Without me asking they cross-shipped a replacement. I had to scramble to get the defective one to the post office before the replacement arrived!

The second one worked perfect. I just hooked up the wires and turned it on. It immediately came up and asked if I wanted to connect to the SageTV. I replied that I did and I was done. Even the remote I used with the SageTV worked.

Oh, the PlaceShifter license - I had bought this some time ago. The media extender capability of SageTV uses this same license. It is a concurrent use license so I can use both PlaceShifter and the media extender, just not at the same time. The only "gotcha" to this is that the MediaMVP turns itself on (activitating the license) when it is powered up. So I just plugged it into my UPS to minimize this problem.
Posted by Ben Moore at 4:23:00 PM