The City of Southaven has been developing a metropolitan wireless Internet Service Provider. The first areas were serviced by some kind of microwave service (more later). You had to be near one of the city's water towers. Then you had to have a special antenna and modem. A friend of ours had it and its bandwidth was around 512 Kbps. Pretty pitiful.

As I rode through my neighborhood recently, I saw this on a street light pole. 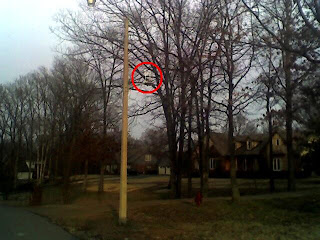 When I got home, I grabbed my laptop and went looking for new wireless networks. Nothing there.

Then last night, I tried again and there it was: 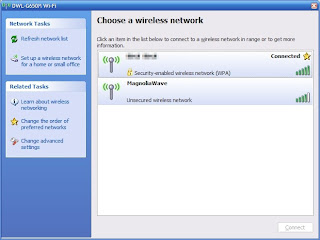 So you know what I did. Yep, connected to it. Don't worry. That laptop is running a firewall.

But I immediately got this: 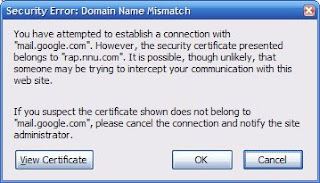 I guessed that they were intercepting http and forcing some kind of logon so I went to my browser and got this: 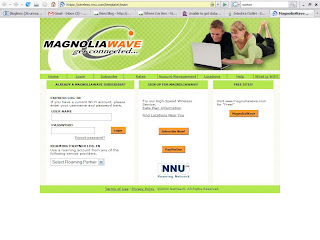 The homepage for MagnoliaWave says their price is $30/month and run at 1 Mbps. They also have daily access at $6.95 per day. They referred to their roaming partners so I hoped they had partnered with AT&T but no luck.

From the logos on the homepage it seems like the earlier solution was WaveRider from Vecima.
Posted by Ben Moore at 9:00:00 PM

I have MagnoliaWave and have had continuous problems. I always thought it was my computer. However, I have no problems at all when I use a hotel or other internet service. I am looking for another internet provider now. I was hoping for other comments about MagnoliaWave.

There stupid antennas drown out my how wifi all the time.Royal pain in the you know what i install a reapter and larger antennas still does it. I think they do it to kinda for you into using there service since the drown out weaker signals and yes my signal power dropped after they were installed went from full strength and 98 percent quality to 64 strength and 23 quality.

Although I have only used it a couple of times when att was down for one reason or another, I have there antenna at each end of yard. I use n wifi in my house and have had no signal loss