I have Google Maps on my BlackBerry Curve. One morning on my way to a meeting I ran into a traffic jam on I-240 Eastbound.

As I sat there, I had time to play with Google Maps. Tennessee's SmartWay has started publishing traffic reports. Google picks them up and overlays them on their maps.

Google also "crowd sources" traffic information from the My Location feature of Google Maps. This is enabled by default but you can turn it off.

When I first looked, it seemed that the information was incomplete. I saw green on the Westbound lanes but the green stopped just behind me. 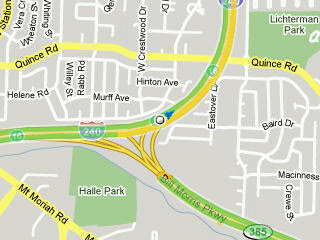 It turns out that there is a yellow line indicating slow traffic on top of the yellow line for Eastbound I-240. Look closely and you can tell the the slow traffic line is more golden than the road line. That's hard to tell on the low contrast BlackBerry screen. 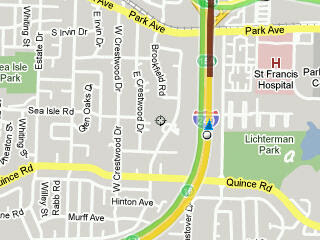 In a later trip I was able to take advantage of this information.

I was Eastbound on I-240 approaching Millbranch and the traffic slowed to a crawl. I dived off on Millbranch.

Once on Millbranch I fired up Google Maps and this is what I saw. 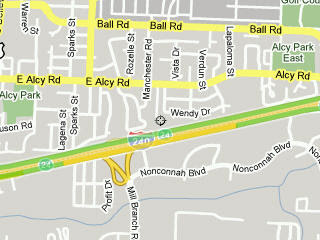 What that told me was that I could hop back on I-240 at Airways since the green started back up between Millbranch and Airways.