I've been getting hand-me-down phones from my son-in-law until he upgraded from his iPhone 3GS to an iPhone 4. He gave the 3GS to my daughter!

I never wanted an iPhone anyway. ;)

I had been watching Android phones. AT&T was slow to get Android phones, perhaps because they had the iPhone. They finally got the HTC Aria and the Samsung Captivate (a Galaxy S variant).

My rationale was to wait until these devices were upgraded to Android 2.2. The reason was that I wanted the newest Gmail and Google Docs applications and tethering (really unlikely due to AT&T).

Then the battery in my BlackBerry Bold started to get less and less capacity. And the holster broke. I needed some kind of excuse!

I thought I wanted the Aria until I touched the Captivate. It's so slim and light and the OLED screen is so bright! 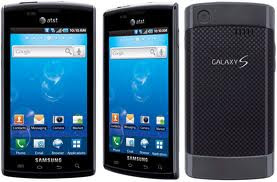 Just before Christmas I discovered that AT&T had refurbished Captivates on their web site for $9.99. Yes, the decimal is in the correct place.

Compared to the iPhone 4 the Captivate is lighter with a bigger screen. And it doesn't need iTunes. Did I mention that it's cheaper?

When it arrived, I had never played with an Android. I spent the next 12 hours playing. It's amazing.

I use Google Hosted Apps to host the e-mail for my domain so I was able to use my domain e-mail as the Google account. I expected everything to work smoothly but I wasn't prepared for how well integrated all the Google services were.

The calendar is the same. Today I created an event on my web Google calendar. As soon as I saved it, the phone buzzed. That was the notification for the new event.

I have been challenged by the battery life. I did all the suggestions I found in the forums with little success. AT&T exchanged the phone for me and the new one seems to be some better but still erratic. Most days I have 50%-60% at the end of the work day but then some days it'll be 20% and complaining. I can't discern a pattern nor cause. I've just laid in microUSB cables at strategic locations to recharge but I really haven't needed them.

I use Wi-Fi (802.11n) heavily at home and at work. The work network uses 802.1x authentication and with a little fiddling it works great.

I'm not an app hog but I've installed a number of apps from the market. AT&T has restricted the Captivate to only Android Market apps but that hasn't been an issue.

Here's what I've installed:
I'll write additional posts on several of these apps.

I haven't rooted it like I did the NOOKcolor and don't expect to. If Samsung and AT&T don't ever deliver Android 2.2 then I'll have to reconsider this.
Posted by Ben Moore at 5:14:00 PM