You'll remember that the closing line in my HP TouchPad Clearance post was "Now let's see how long it takes to get Android on it." It took 3 months.

Cyanogen has been hard at work on putting CyanogenMod 7 (Gingerbread) on the TouchPad. In mid-October they released an Alpha entitled "'lower your expectations edition." I began following the thread on the Rootzwiki forum.

This week they released Alpha 2 known as the "don't link directly to the files edition." I was ready to jump at that point.

Being that it is an Alpha, it is not as straightforward as putting CM7 on the Nook Color.

There is a youtube video that guides you but unfortunately doesn't really show everything. I found a post in their forum that had more step-by-step and used it as well.

The install came off without a hitch. The step where you run their ACMEinstaller took longer than I expected (and much longer than on the video) but just sit back and let it run.

From that point forward it's pretty much the same as the Nook Color. You need to go to Settings->CyanogenMod settings->Display->Automatic backlight and check "Enable Light Decrease". And go to Settings->ADW Launcher->Screen -> Desktop Columns. Set to 8 for more space on the Launcher screen.

There are still lots of issues outstanding but they haven't been a problem to me. People are reporting problems with Wi-Fi. The only problem I've had is connecting to a second Wi-Fi network. I had to reboot for the TouchPad to see it. In response I set Settings->Wireless & network->(menu) Advanced->Wi-Fi sleep policy to Never.

Others report Sleep of Death (SOD) where the TouchPad won't wake up from sleeping. Seems to be a lesser problem in Alpha 2 but one recommendation is to set Settings->CyanogenMod settings->Performance->CPU settings->Available governors to ondemandtcl.

The Android Market works fine. I can't get Swype to work yet and haven't played with my Bluetooth keyboard.

There's a list of apps and their status here.

The current version of Google Docs for Android is 1.0.4. It seems to presume that if the device is a tablet that the operating system must be Honeycomb. I downloaded an 1.0.20 apk from here.

Even the media that I had loaded on the TouchPad made it over to Android and play perfectly. 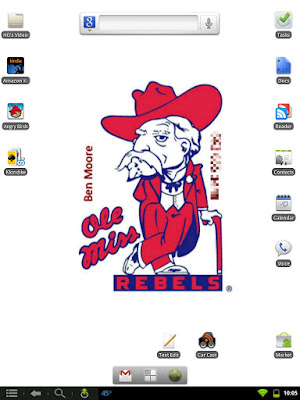 And just to prove it's on the TouchPad. 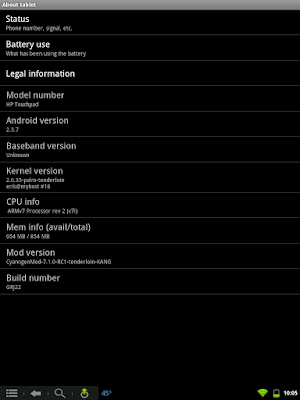