I've been a Drobo fan since 2007. My original Drobo is soldiering along just fine.

It has grown from 371GB protected to 1.8TB protected. But storage demands are growing by leaps and bounds.

So I had a problem.

GPT (GUID Partition Table) addresses the volume size and is supported by Windows 7. GPT supports up to  9.4ZB which should last me a while.

With 4 2TB drives the original Drobo will give 5.44TB protected.

I inherited another original Drobo and started building it up with GPT and big drives.

Initially I provisioned it with 3 1TB drives giving the same 1.81TB as my old Drobo. 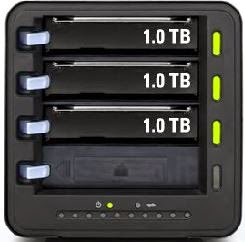 Then I copied the data from the old Drobo to the new Drobo. That took a couple of days as it uses USB 2.0.

When the copy completed I checked the size and number of files copied and they were fine.

I plugged the new Drobo into another system and renamed the volume to the same as the old Drobo. I shut down SERVER and switched Drobos. After the boot I had to reassign the drive letter and correct sharing and permissions.

It appears that the original Drobo misrepresents itself to the BIOS early on as a floppy drive. In the BIOS boot search I still had floppies as the first entry even though I don't have a floppy. I removed this entry and the boot problem went away.

What's next? More space. What else?

After a week or two I'm going to reclaim one of the 1TB drives from the old Drobo and put it in the new Drobo. 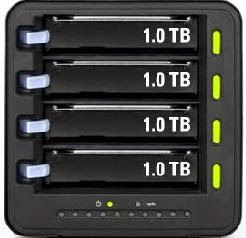 This will give me 2.72TB of protected space, an increase of 910GB from the old Drobo.

The second next step is to replace a pair of the 1TB drives with 2TB drives. 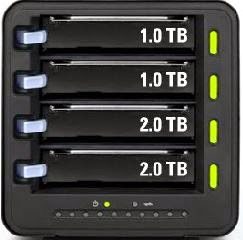 This will give me 3.63TB of protected space. That'll have to wait until the price of 2TB drives comes down.

Update: When I added the additional 1TB drive one of the older 1TB drives failed. The Drobo did it's magic and seamlessly rebuilt redundancy with the new 1TB drive. This drove me to accelerate the swap to 2TB drives. My goal now is to stay far enough ahead of my capacity requirement that the failure of a single drive won't cause me to lose redundancy.
Posted by Ben Moore at 8:28:00 PM