In Geotagging III I discussed my quest to capture a geotrack of a then upcoming trip. Well, we're back. We spent a week in Ireland.

As I noted in Part II of that post I had discovered that I could specify for GPSLogger to only use the device's GPS for getting location. This significantly improved location quality at the expense of battery.

After I posted Geotagging III I got an anonymous comment that told me that the author of GPSLogger (for Blackberry) has created an Android version. While I haven't tried it yet I would expect a it to be stellar app.

On our vacation I used my 2013 Moto X with GPSLogger for Android with the frequency set to 1 minute and location from GPS only. While this was hard on my battery I never ran out of charge.

The result was fabulous. 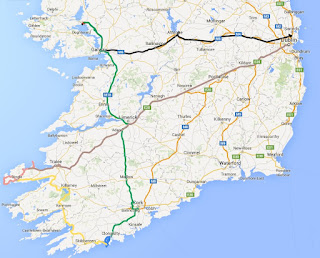 After a sleepless night across the Atlantic and then a day long drive on the wrong side of the road, I forgot to turn on the GPSLogger tracking until after lunch. This was near Ballinasloe. So the track from Dublin to Ballinasloe was using the Google Now tracking.

Likewise on the trip on 05/29/15 I turned off GPSLogger at Moneygall and didn't turn it back on until just before Kildare resulting in the straight line connection between those 2 points.

You can see the My Maps map here. If you zoom in you can even see where we walked through the woods with the hawks at Ashford Castle.
Posted by Ben Moore at 7:26:00 PM