My X201 is getting slow with its 1TB Toshiba HDD. I installed that big drive for photo storage on my trip to Ireland. When I returned, I copied the photos to my primary storage so I haven't been using most of that 1TB.

Monthly I use Windows' "Create a system Image" tool to take an image backup of each of my PCs boot drive.

When I used this on the 1TB drive in the X201 I only selected the C: partition. I had resized this partition to less than 250GB so it would fit comfortably onto an SSD when I was ready to move that way.

2 months ago the monthly backup failed with drive errors on the C: partition of the 1TB HDD. 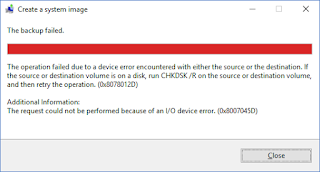 I pulled out my copy of SpinRite and let it run on Level 2. It confirmed that there were unrecoverable errors on it.

Not expecting much I tried Windows' chkdsk. My expectations were met. It would reboot to a command prompt and then run to 13% and sit there. While you weren't looking it would do something and reboot to Windows.

Windows kept on running fine but I knew it was a ticking time bomb.

I bought a Samsung EVO 500GB SSD and set out to move to it.

I had a Windows system image backup from 2 months ago. I installed the SSD and I booted from my Windows 10 installation USB drive. I went to "Troubleshooting" and chose "System Image Recovery."

I selected the backup image and began the restore.

I got a message that "The disk that is set as active in BIOS is too small to recover the original system disk" with error 0x80042407.

The problem is that Windows system image backup requires a target drive that is as large as the sum of the partitions defined on the drive when the backup was made. This means that even though the partition I backed up was less than 250GB I needed a 1TB drive to restore to.

A word to the wise, test your backups.

As luck would have it I had a 1TB drive sitting around so I restored to it and then used the Samsung Data Migration tool to copy the partition to it.

In retrospect, after I had resized that system partition to 250GB I should have dropped the partition that was just holding a place on the drive before I took the Windows system image backup.
Posted by Ben Moore at 7:52:00 PM