Almost 3 years ago one of my former co-workers told me he had just upgraded to an Asus router and it really improved his throughput. He didn't remember which it was so I started shopping.

You'd know I'd come up with something cheap inexpensive. I got a refurbished Asus RT-N65R. It has performed very well for me.

We have been noticing some blips of the Internet but my EMCO Ping Monitor didn't complain. I finally realized that it was the radio in the router failing.

So my quest for a new router started.

I really liked the ASUSWRT firmware. But the firmware for the RT-N65R hadn't been updated since January 2015. Operationally it was fine but I was worried about security patches.

While Comcast has raised their bandwidth "trial" to 1 GB I still am interested in tracking my bandwidth usage. I wanted to maintain this ability and even expand it to tracking by device.

I looked at dd-wrt and Tomato. There are plugins for those firmwares to do this but it takes more command line skills than I was ready to tackle.

My son-in-law had the Asus RT-AC68R. It is dual-band 1900 Mbps so it is FAST. And its firmware is still being updated.

Not only does it have the same bandwidth reporting as the RT-N65R but it will break out bandwidth by client and application. 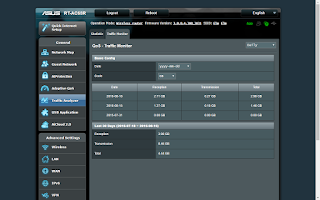 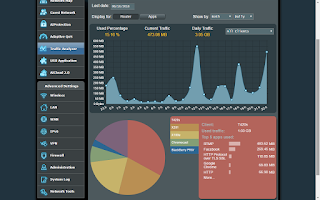